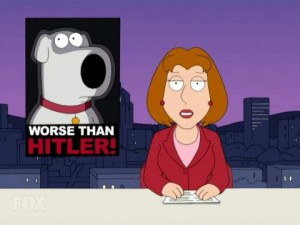 The Live Feed has the details of 20th Century Fox deciding not to broadcast an upcoming Family Guy episode titled Partial Terms of Endearment. Originally slated to air next season, the episode is reported to deal with abortion. The details of the ban recently came to light during the show’s San Diego Comic-Con panel.

Not that you probably can’t see it at all. Family Guy fans may remember that “When You Wish Upon a Weinstein”, a previously “banned” episode, showed up on the Cartoon Network’s Adult Swim block. And if that’s not an option, there’s always Hulu. Or possibly the home video release. Whatever the medium, hopefully it will become available a little quicker than Married with Children’s “too hot for television” I’ll See You in Court episode. That only took thirteen years to air. I imagine the Family Guy episode will go something like this:

***UPDATE*** Creator Seth McFarlane has announce the episode will be available on DVD only. Though I suspect those plays are always subject to change.