With all the success of “Avatar”, it’s largely gone unnoticed that it pulled off a fairly symbolic gesture recently, namely punting “Star Wars” off the top ten highest grossing movies of all time. If you’d told a Warsie ten years ago that Star Trek would be more relevant and have a fresh reboot, or that his beloved franchise would be booted off the top ten list by a boy wizard, a guy in a flying rat suit, a couple of midgets and a fey pirate, and that jerkass James Cameron would own the top two slots, he would have told you “Attack of the Clones” was, like, totally going to be the epic “Episode I” was supposed to be. 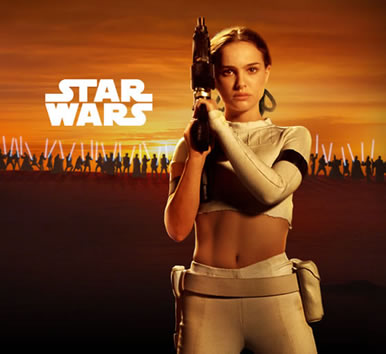 It wasn't ALL bad.

Instead “Episode I” is clinging to number eleven, and “Episode III” is barely number twenty. And that might fall when the next “Twilight” sequel comes out.

It’s hard for some to remember this, but there was a time when Star Wars was actually a major cultural force. It was the movie franchise everybody liked, because it was awesome. Nerds and jocks agreed “Star Wars” was awesome and being a Trekkie was what got you beaten up. George Lucas was praised for tapping into the cultural zeitgeist or whatever buzzword was trendy then and spinning it into epic mythology and shitloads of money.

Now you have to scroll down to the low sixties to find a GOOD Star Wars movie on the charts; Empire made $500 million. It got outgrossed by “New Moon.” AND “2012”. OK, so maybe we shouldn’t feel bad for George Lucas, and it’s not like the gross horse race reflects quality; the highest-grossing Indy movie is “Crystal Skull”, for Christ’s sake.

But watching what used to be a popular, beloved franchise crumble in less than a decade is kind of stunning and depressing, especially when it’s replaced by Teenage Mutant Ninja Smurfcats. And that’s the thing. The Real Trilogy is flawed in places, and a bit clumsy, but it’s actually a good series of movies. Yes, even “Jedi”. The one unreservedly good movie in the top ten of all time right now is “The Dark Knight”.

Sure, we can tell ourselves that over time, only quality work sticks around. People will still be talking about “The Dark Knight” long after Stephenie Meyer has been brutally murdered by Stephen King, for sucking. But it’s kind of a bitter pill when shit makes that much money.

Also, “Episode I”? The highest grossing “Star Wars” movie? What were we thinking?