So, this comes with a warning, “Do not watch Oliver Stones ‘s JFK and Peter Jackson’s Lord of the Rings trilogy dozens of times a piece back to back.” I have done it and it becomes like the Wizard of Oz and the Dark Side of the Moon.

Let’s start with a basic premise….

Frodo Can Be Written Off As A Lone Nut 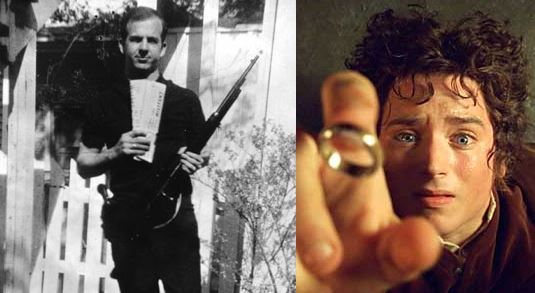 Ultimately, what exactly is Frodo being tasked to do? Sure, he is told to go to Mount Doom and drop the ring in the fire. This will destroy the ring. However, what is the objective of destroying the bright and shiny object? The implication is that Frodo is going to assassinate a world leader with one kill shot.

The destruction of the One True Ring by one potential madman gives everyone else a kind of plausible deniability in the whole affair. “This crazy Baggins kid went off and did this crazy thing before anyone could stop him. That must have been what happened.” The point is to destroy the Great Eye Sauron. Sauron is seen as a vicious war monger gathering all evil towards him, however he is also the leader of a sovereign land.

In JFK,  Clay Shaw is a shadowy government figure who has his hands in literally everything. What’s more, he is said to be deeply involved in the ‘homosexual underground.’ Shaw is guiding everything at all points. However, he is not directly involved in any of it when it comes right down to the event.

Can you imagine a district attorney bringing in Gandalf for questioning about the murder of Sauron going any different from Jim Garrison interviewing Claw Shaw? Shaw, in JFK is a puppet master moving pieces around a board in order to destroy his enemy. Gandalf appears to fulfill the same goal in Lord of the Rings.

If you watch the Lord of the Rings trilogy carefully, then you notice something. Who does Samwise Gamgee answer too?  He answers to Gandalf. Frodo tries to leave him behind. However, Samwise is specifically given the mission to keep Frodo on task. Again, what is the task? The task is an assassination. Frodo has to make the journey in a very specific manner. He has to be in the right place at the right time for either the kill shot or to be set up to take the fall.

That is the same position that Ferrie fulfills in JFK. Ferrie may very well have had legitimate affection for Lee Harvey Oswald. The point is though that Ferrie, as well as Samwise, had their own set of orders that they were acting on the entire time.

in JFK, there are ‘second Oswalds’ all around acting as decoys in order to set Oswald up. They are also around to provide distraction just in case something happens to go wrong. Once Merry and Pippin involved themselves in the mission, their value was seen. Frequently, one or both is mistaken for the Ring Bearer and taken into custody. They could not actually risk Frodo falling into the enemies’ hands, so Merry and Pippin were convenient as well as expendable.

The King In Waiting

None of this would have been done without some one a lot more agreeable just waiting to take over ‘the world of men.’ In the Return of the King, Gandalf is right there at the end in order to crown Aragorn as the king of Gondor.

In a more subtle way, Clay Shaw is performing the same action after a coup d’état by orchestrating the assassination of John F. Kennedy. They knew LBJ’s / Aragorn’s politics were agreeable to their goals before they were ever installed. As they said in JFK “Why does treason never prosper? Because if it prosper, none dare call it treason.” Lord Denethor tries to stand in the way and no one really weeps when he is kicked into a fire before launching himself off of a high-rise.

Think about it for just a moment. Both Frodo and Oswald are given aliases and identities specifically for the reasons of travel. Frodo is told that his name is no longer safe outside of the Shire. Oswald is put into a boarding house under a fake name.

Yet, when something critical happens, it is their own name that gets involved. Oswald buys the gun under his own name. No one outside of Frodo (except for Aragorn once) refers to him as Mr. Underhill. However, the register at the Prancing Pony would show that a Mr. Underhill stayed there. The Mexican episode (to try to gain entry to Cuba) is done in Oswald’s name. When Frodo visits Galadriel, he is encouraged to use his own name right off the bat (even though they may or may not be friendly.) If everything went wrong, Frodo Baggins would be easily framed and his life would be forfeit.

In JFK, Jim Garrison meets with a mysterious character called X. X is a black ops specialist who gives Garrison background on what is going on. X is obviously a powerful inside figure, however X is attempting to get out of everything as quickly and quietly as possible.

Conversely, there is nothing that is done in the Lord of the Rings without Elrond’s permission or at least knowledge. Elrond’s role (other than providing a home base) is mostly peripheral. At the end, he makes a weapon to verify Aragorn as the King. This is easily a similar operation that X could have done and subsequently omitted from his discussion with Garrison.