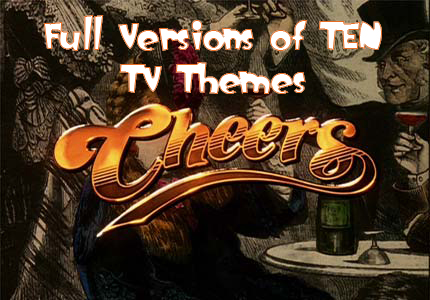 We all know ’em, we often love ’em, and they are very much integral to the shows themselves. But have you ever said to yourself, “Man, I wish this TV show’s theme song was longer and more — I don’t know — song like.” Well as it turns out, many of them were and are. In fact, a few of the songs on this list are even more memorable than the shows themselves. So are many more, to be sure, but these particular tunes have the distinction of having been commercial hits to some degree. Not just themes, but Top 40 tunes. See if you remember the words. Or at least thirty seconds of them.

The 88 – At Least it Was Here
The Theme From Community

One of the newer shows on here, Community has continued to show its strength in humor and excellent writing. Also, the theme song is catchy as hell.

Lazlo Bane – I’m No Superman
The Theme From Scrubs

Not the biggest repertoire on earth, but Lazlo certainly struck a chord (ha!) with this theme. The show may have gotten stale, but the theme will always get stuck in your head.

Alabama 3 – Woke Up This Morning
The Theme From The Sopranos

Not exactly the theme one might normally choose for a gangster drama, but yet, it totally works.

I absolutely abhor this tune and it’s likely due to the fact it was played perpetually on the radio when this show got popular. Otherwise, I might hate it just a touch less.

A huge hit in 1981 that debuted at number 40 and eventually hit the 2 spot a few months later.

Former Lovin’ Spoonful frontman, John Sebastian, managed to croon this number all the way to #1 on the charts in 1976. Also a very cool song.

This is another of the newbies on the list but the song is just too cool to ignore. I actually did hear it on the radio a few days ago, but I’m not sure if it’s charting or anything yet.

Trivia time: The song itself was penned by the original movie’s director’s (Robert Altman) son, Mike, who was 14 at the time. And though it was an eventual hit, the four singers themselves were uncredited. They were sessions artists John Bahler, Tom Bahler, Ron Hicklin and Ian Freebairn-Smith.

The Who – Who Are You?
The Theme From CSI

Yes, this was a hit long before the show CSI was even thought of, but the simple fact that all three CSI shows (LV, Miama, and NY) use Who tunes is pretty cool. This was the first, so it’s the best.

Gary Portnoy – Where Everybody Knows Your Name
The Theme From Cheers

Hands down. Best show, and best theme. I dare you to question.