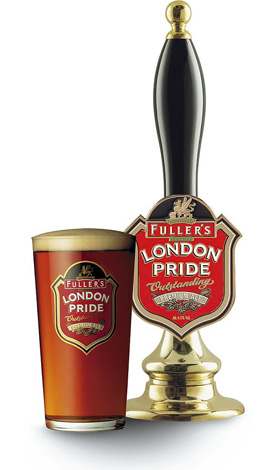 Information: From the Site – “Known and loved for its distinctive, rounded flavor, London Pride is the award-winning beer for which Fuller’s is most famous. In recent years its popularity has grown to the extent that it is now Britain’s leading premium ale: a welcome fixture in many pubs and off licenses around the country, and now winning new friends abroad.
To the beer afficianado looking for the classic English pint, we say this: Whatever you do, take Pride.”

Continuing on with my adventure tasting as many beers from across the pond as I can conceivably get my mitts on, I delve into the classic English Ale known as Fuller’s London Pride. The label features a coat of arms showcasing script on a red background. Near the bottom of the shield is a mass of about nine hops, obviously representing the main flavor ingredient in the beer, and a griffin pawing a beer keg just above the coat. Very English and very cool.

The pour is a very pretty golden-bronze with tight, clean, white crown that already shows off its lacing capabilities as it distends just a bit. The aroma is a lively malty twang with a heavy nose of sweet English bread. There’s a bit of a citrus background that almost offers up a candied variety of maybe plumbs and tangerines. It’s a pretty complex odor, that’s not at all saying too much.

The body is slightly fleeting. The beginning is bright and lively with muffin-type flavors and luscious fruits giving way to a tangy rind and a slightly clove-like afterthought. It’s middle is very softly licorice with wispy hints of rose flowers and just a hint of piny hops. However, the finish is abrupt and quite dry. This is certainly a classic in the English Ale varieties and one of the region’s standards, but, for my money, there’s just not a lot to all three stops on the taste train.