Fifteen Fun Things To Do on the Carnival Sunshine Cruise Ship

The first thing people ask you when you tell them you are going on a cruise is invariably, “Where are you going?” The answer in this case was Aruba, Bonaire (above) and Grand Turk. We were invited by the good folks at Carnival to join Men Who Blog on an 8-day Cruise of the South Caribbean on the fabulous Carnival Sunshine. However the destination was somewhat inconsequential. Sure the islands were amazing, but you’re likely to have a good time regardless of which Caribbean Island you visit. Each port time lasted about 8 hours, so collectively we spent less than 24 hours on shore… and many more hours on the floating resort known as the Carnival Sunshine.

The Sunshine was rechristened in 2013, after receiving major renovations to turn it into a Carnival Fun Ship 2.0. This virtual video tour does a nice job of describing the upgrades, if you’ve previously cruised on Carnival and wonder what’s included in Fun Ship 2.0 :

So rather than focus on our destinations, we thought we would feature the journey. More specifically we’re going to highlight how we spent our time on board. Each day began with the “Fun Times”, essentially the ship’s itinerary for the day, which let us know what activities were planned. Using that we were able to experience much of what the ship had to offer without feeling bored once. In fact, there are plenty of activities on board that we didn’t even try (Spa, Shopping, Camp Carnival, Karaoke, etc.), so here is just a sample of fun things to do aboard the Carnival Sunshine Cruise Ship… 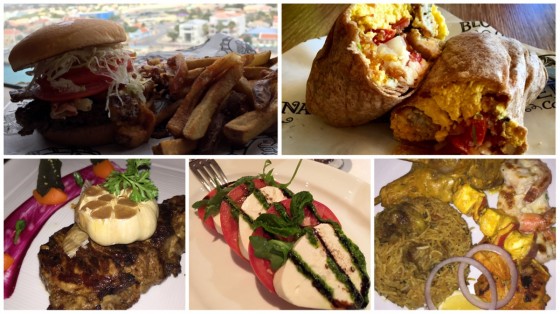 We’ll get this out-of-the-way first. Three times per day, ok maybe four or five, we engaged in the life-sustaining task of nourishing our bodies. We dined almost everywhere possible on the ship, so we’re going to make that the focus of a future feature, ranking the food offerings on board. Until then, let’s just say we enjoyed nearly every meal, and dining really was a fun activity. Nom, Nom. 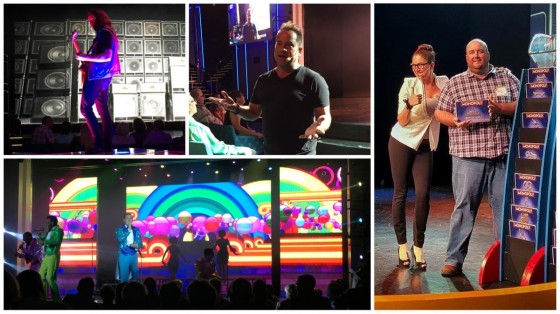 Each night, the Carnival Sunshine features a stage show in the Liquid Lounge. These shows quickly became the highlights of our days aboard the ship. The seating could be more comfortable, but the quality of the performers was top notch. Playlist Productions is the name of the on-board group of talented singers and dancers that performed several evenings with Latin, Motown, ’70s and Epic Rock shows. We also thoroughly enjoyed magic from Bobby Borgia, hypnotism with Rich Guzzi and the interactive Hasbro, The Game Show to end the week. Every night on the Carnival Sunshine features Dinner and a Show, and we highly recommend you take advantage of the included live entertainment. 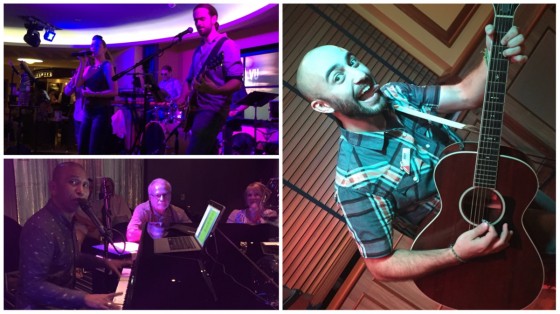 If live music is your thing, in addition to the state shows, there is plenty of additional variety available on the Carnival Sunshine. We enjoyed live performances by Russel Blues in the Piano Bar, Dominic on Guitar in the Red Frog Pub, and Rock & Roll with Deja Vu in the Ocean Plaza. You can also find a DJ led dance party rocking late night in the Liquid Lounge. Performers rotate between several venues each night throughout the cruise and there is never a cover charge on the Carnival Sunshine. 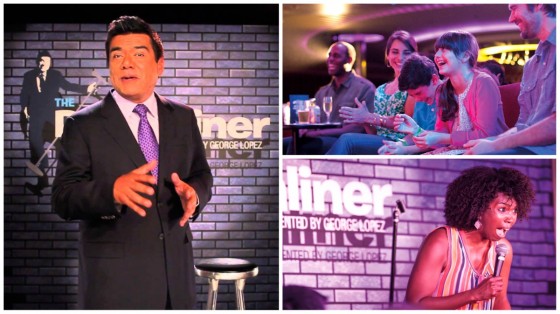 The Punchliner Comedy Club, inspired by George Lopez, is one of the most popular activities on-board. Most nights there is a line at the door to get in for the show, and the club has a maximum capacity that fills up quickly. For this reason, we only attended one comedy show during our cruise, but we certainly got more than a few laughs from Al Ernst. There are both PG and 18+ shows offered most nights in the Limelight Lounge, and performers rotate in and out throughout the length of the cruise. 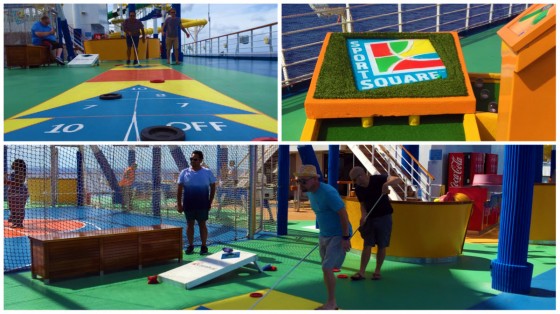 If you’d like to get outside and play, the Carnival Sunshine has an entire deck dedicated to that, and they call it Sports Square. It’s open 24 hours, however weather conditions sometimes make it difficult to compete. We attempted a Miniature Golf tournament on the windiest day at sea, and it was an interesting challenge. Ping Pong was nearly impossible with the wind, and Corn Hole was surprisingly affected by the wind as well. We found shuffleboard to be the most fun, and something that you rarely see outside of a cruise setting. There were also pool and foosball tables, running track and a basketball court. For some reason the Hot Dog stand was closed during our cruise, but some drinks and snacks up on that deck would have definitely been welcomed. 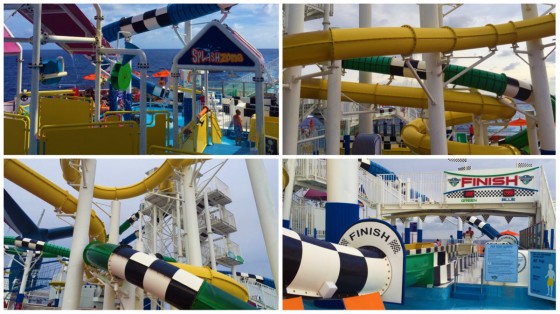 WaterWorks is Carnival’s on-board water park. It features the Twister water slide, and side-by-side racing slides which time your runs and encourage your competitive spirit. Despite what it looks like, this isn’t just for kids, the young at heart are encouraged to zoom and splash around too. 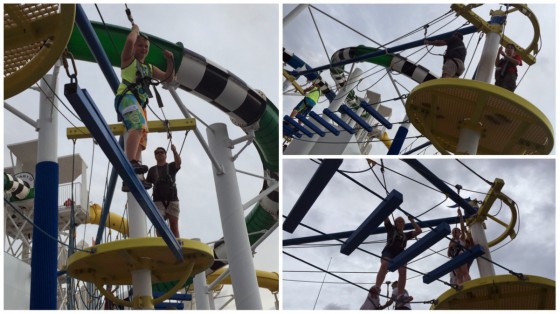 High above Sports Square and integrated into WaterWorks is the best view available on the Carnival Sunshine, the SkyCourse. It’s an awesome ropes course that is included with your cruise and fun for all ages. They strap you in with a harness and then set you on a path with challenging obstacles. There are two levels of challenge available, so you can choose just how much you want to push your fear of heights. Unfortunately this is an activity that is unavailable with high winds, so it was closed for more than half of our cruise. 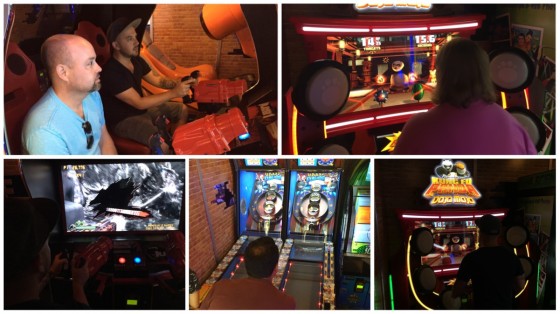 The Warehouse Arcade is open 24 hours per day, and is a fun place to visit on your cruise. Games are charged directly to your scanned Sail & Sign card, which makes it super convenient. They even have an automated system for exchanging  your “tickets” for prizes. Kung Fu Panda Dojo Mojo was particularly fun and encouraged lively competition among friends. We also enjoyed the four player Pac-Man themed air-hockey game. 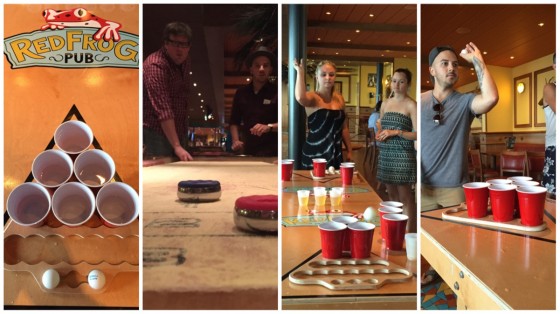 If video games aren’t your thing, then maybe you would enjoy the Bar Games offered at the Red Frog Pub. We spent a few hours at sea playing table shuffleboard, which becomes even more challenging once you’ve had a few drinks and the boat starts rocking. The bar also serves as the home to a few Beer Pong tournaments throughout the cruise, which are fun for both competitors and spectators. If you make it through every round and win the tournament, you receive a Red Frog Pub glass, filled with whatever beer you’d like. Because that’s exactly what you need after playing Beer Pong, more beer! 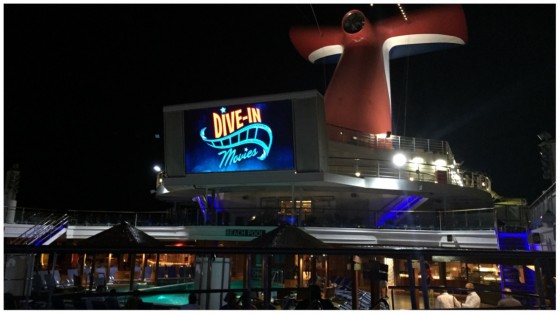 The Carnival Sunshine features a massive screen mounted above the pool deck, and they use it for nightly Dive-In Movies. The movies featured are relatively recent features in a variety of genres. Poolside lounge chairs serve as the seating, and one of the bars is turned into a Popcorn stand. Most nights feature two recent blockbusters from categories like Comedy, Action, Adventure, and Romance. We enjoyed Mission Impossible : Rogue Nation one evening at sea. 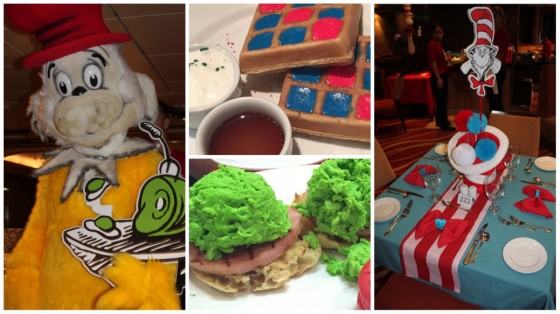 Carnival has teamed up with Dr. Seuss for their Seuss at Sea kids themed activities. Throughout the cruise there were several events aimed at kids and kids at heart including story time, a parade, and opportunities to meet the characters. The Seussafied fun came to a crescendo with the Green Eggs & Ham themed breakfast with Sam I Am on the last fun day at sea. To be honest, the food tasted about as bad as you would expect, but the experience was still worth it. If you have kids, we definitely recommend you take them to this one of a kind breakfast, but we just suggest you order the “Fox in Socks Steak & Eggs” for yourself, instead of the more adventurous items on the menu. 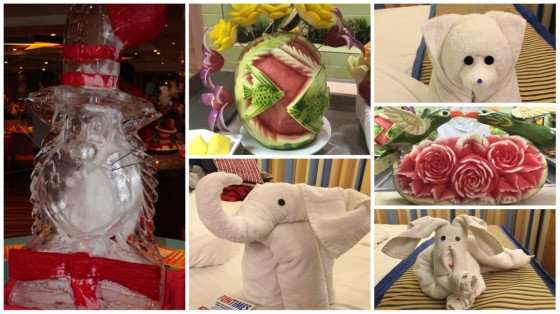 Each evening aboard the Carnival Sunshine, we were greeted by a Towel Animal in our stateroom. On the last fun day at sea we attended a seminar that instructed us how to make our very own towel animals. This is just one example of the artistic touches on board the ship which made it a special place to be. Seeing demonstrations of how this art is created was particularly fascinating and enjoyable. We doubt we’ll be carving ice or watermelons for our next dinner party, but it’s possible our next house guest will get a baby towel elephant on their bed, thanks to inspiration from Carnival. 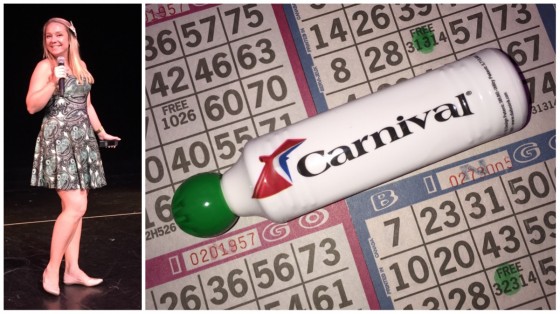 BINGO is a traditional cruise activity, so you have to play at least one game while you’re on board. You have the chance to win cash prizes, so it does cost money to play. Jackpots increase over the length of the cruise, so play late in the week if you want to have a chance at the biggest pots. It’s a fun game, especially if you win, but if you find yourself playing more than twice during your cruise, you may have a problem. 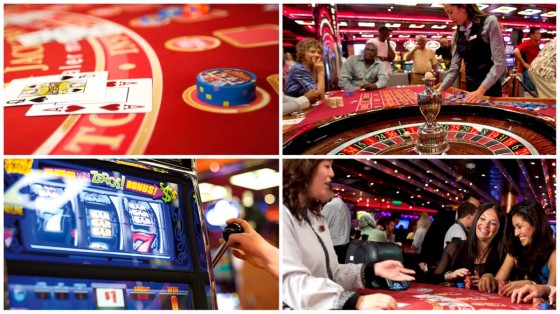 Casinos remain a popular attraction on any cruise ship, and the Carnival Sunshine is no exception. We spent minimal time in the Casino during our cruise however, deciding instead to maximize our time enjoying the other activities aboard the ship. This is one of the few places on board which allows smoking, which made it our least favorite place to visit, but if gambling is your thing, they likely have everything you are looking for.

15) Relaxing by the Pool 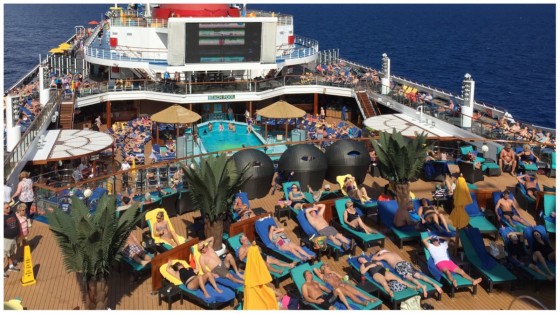 Walk around the top deck of the Carnival Sunshine during the day and it’s fairly obvious to see what one of the most popular activities on board the ship is. It’s doing absolutely nothing but relaxing on one of the variety of different forms of seating, soaking up some rays, and maybe reading a book. Occasionally folks take a dip in the pool, but the vast majority just seemed to be hanging out and enjoying their vacation. The best spots fill up early in the morning, and remain occupied all day. If you’re looking to get away from the noise and the kids, the Carnival Sunshine offers the Serenity Deck for adults, with upgraded seating, more privacy, and its own dedicated bar.

Check out these additional articles by other Men Who Blog, about our epic time on the Carnival Sunshine :