Seven Fun Things To Do in Historic St. Augustine, Florida 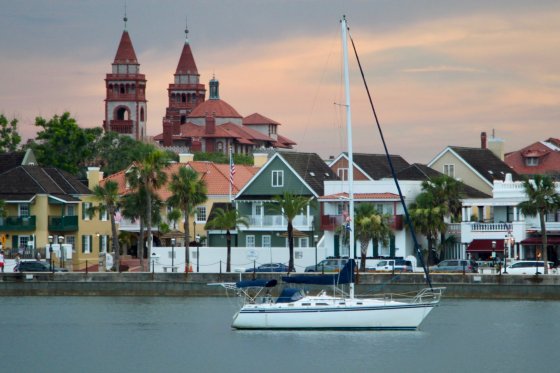 The city of St. Augustine was founded in 1565 by the Spanish and served as the capital of Spanish Florida for over 200 years before Florida was ceded to the United States in 1819. The historic importance of St. Augustine is undeniable, which is why we were excited to visit Florida’s Historic Coast earlier this summer to see it for ourselves. We spent a couple of days in the city and experienced much of what it has to offer to visitors, however we could have truly spent a full week there and not run out of things to do. 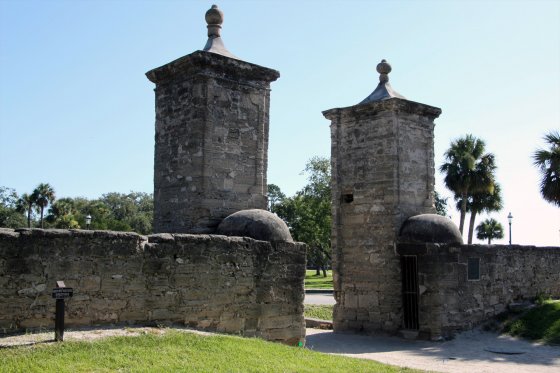 We recommend any visit to St. Augustine begin at the Old City Gates, which are located conveniently in close proximity to the St. Augustine Visitor Information Center. The gates date back to 1739, and sit at the end of historic St. George Street, which is now a fabulous pedestrian walkway full of small shops and restaurants. Most visits to the city likely begin in the afternoon or evening, so the Old City Gates and St. George Street are a perfect introduction to St. Augustine and can be explored late into the evening. 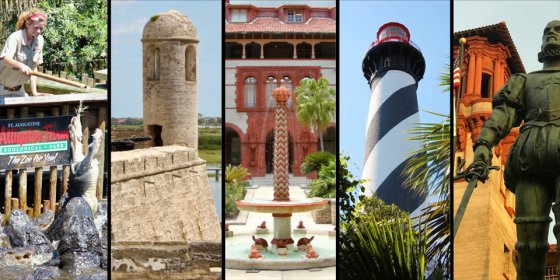 Once you begin your exploration of St. Augustine in earnest with a full day to fill, we’ve prepared a list of seven fun things to do in St. Augustine. There is plenty more to see and do, but these were our favorite experiences: 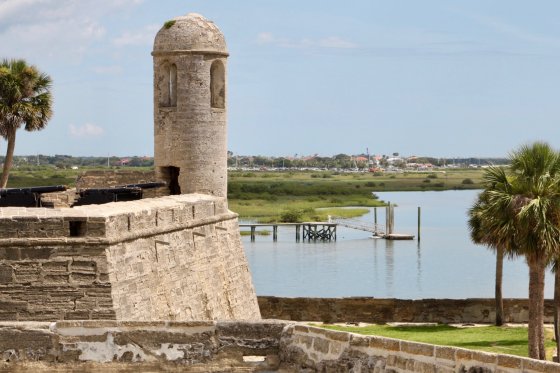 We asked several locals, “If you only have time to do one thing in St. Augustine, what should you do?” Invariably the answer always came back, Castillo de San Marcos. Sitting on the shore of the Matanzas Bay to guard the harbor, the Castillo dates back to 1672 and is the oldest masonry fort in the continental United States. The Star shaped fort is made from stone called coquina, which consists of ancient shells from a nearby beach.

Castillo de San Marcos is operated by the National Park Service and admission is only $10. It’s primarily an outdoor attraction, so during the summer it’s probably best to visit early in the day. The interior rooms of the fort operate like a museum describing life in the fort and the history of the structure. The upper level is home to numerous cannons and spectacular views. 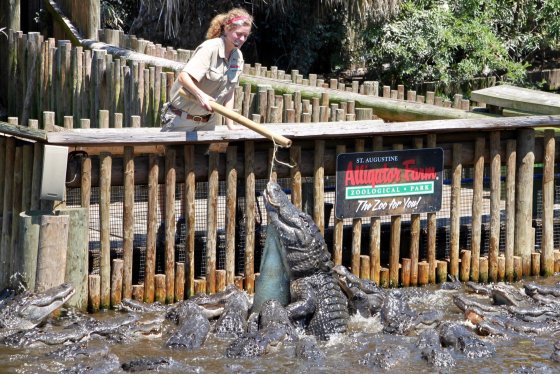 The St. Augustine Alligator Farm Zoological Park may not seem as historic as other things on our list, but it actually opened in 1893, making it one of Florida’s oldest continuously running attractions. The park spans more than 7 acres and prides itself on its collection of 24 species of crocodilians. The highlight of our visit was the Alligator feeding in the massive Alligator Swamp and Wading Bird Rookery. We watched as hundreds of mid-sized gators were fed below us in the swamp, while hundreds of native herons, egrets, spoonbills, and wood storks inhabited the trees above.

Tickets are $25 for adults, and well worth the price of admission.The largest animal and star attraction on the farm is Maximo, a 15 foot – 3 inch 1,250 pound saltwater crocodile. While certainly massive, Maximo barely measures up to the Park’s previous star attraction, the nearly 18 foot and 2,000 pound Gomek. He met his end to heart disease in 1997, but Gomek is forever remembered in an impressive exhibit at the St. Augustine Alligator Farm.

Of note for kids is the tremendous aerial obstacle course named Crocodile Crossing that navigates its way around the park and even above the animal enclosures. They offer two courses, with the more challenging version taking 90 minutes to navigate 50 obstacles, including 16 zip lines. It’s like a real-life version of Pitfall! and it looked amazing. 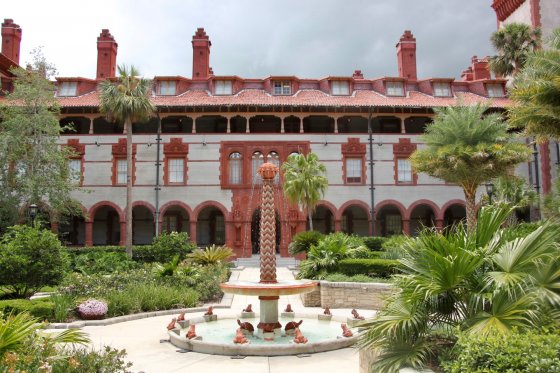 The Ponce de Leon Hotel is the most prominent building in St. Augustine, and was constructed in 1888 by railroad magnate, Henry Flagler. In its day, it was an exclusive luxury resort that only opened during the winter months, and only accepted reservations for the entire length of the season. It currently serves as the woman’s dormitory for Flagler College, and the massive dining room is amazingly still used for student meals daily.

The building is truly remarkable, and while there is plenty to appreciate from the outside, we highly recommend taking the tour to learn much more about this amazing property. Tours are offered daily for $10, and are led by students at Flagler College. The tour highlights the Spanish Renaissance architectural heritage and historical nature of the building. Inside you’ll see the 68-foot domed ceiling of the Grand Lobby, 79 original Tiffany Stained Glass windows in the Dining Room, and handcrafted Austrian crystal chandeliers in the Flagler Room. One of our favorite parts of the tour was the fabulous Edison Clock in the Flagler Room, which contains the largest piece of intact white onyx in the western hemisphere. 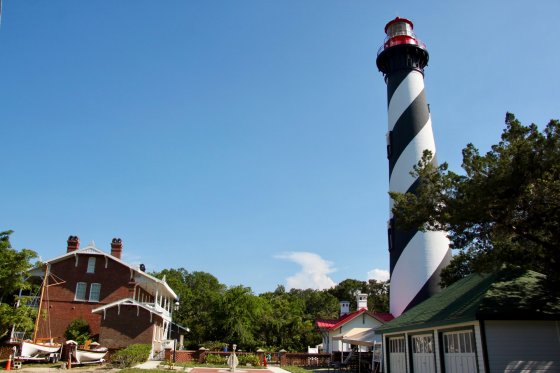 The St. Augustine Lighthouse was built in 1874 and sits on the north end of Anastasia Island in close proximity to the St. Augustine Alligator Farm. At 165 feet, the St. Augustine Light is shorter than the Ponce de Leon Inlet Lighthouse that we climbed near Daytona Beach, but this one has more steps. It was about 95 degrees and humid when we visited, so you’ll have to forgive us for not making that trek up to the top, but we highly recommend you do so and take your own photos.

Adult general admission is $12.95, and includes the Visitors’ Center and 1876 Keeper’s House in addition to the Lighthouse Tower. The property was under construction when we visited, but will soon also include the Maritime Archaeology & Education Center. 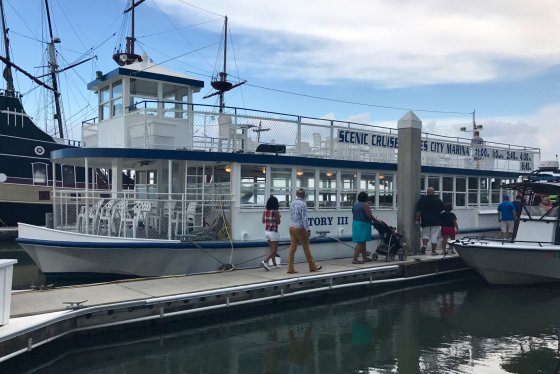 Departing daily from St. Augustine Municipal Marina, the Victory III takes passengers on a 75 minute cruise to the Lighthouse and back. Amazingly, the historic company has been operating since the early 1900s, originally sailing to North Beach at the request of Henry Flagler. Scenic Cruise St. Augustine offers a different perspective of the Bridge of Lions, Castillo de San Marcos and St. Augustine Lighthouse, that tourists just can’t get from land. The $18 cruise is narrated and offers two levels for passengers to choose their seats. 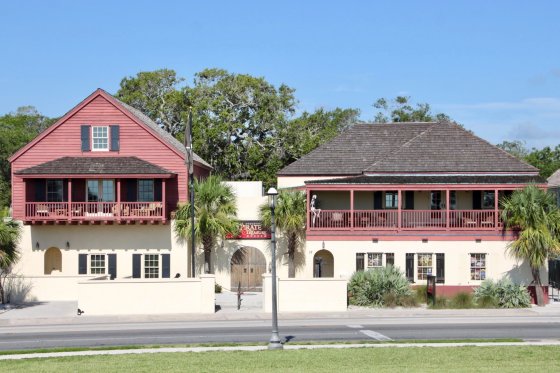 The St. Augustine Pirate & Treasure Museum is both fun and educational, offering an unrivaled Pirate Museum experience that transports you back 300 years to Port Royal, Jamaica during the Golden Age of Piracy. The museum is owned by Pat Croce, former President of the Philadelphia 76ers, who has a well documented fascination with pirates. In fact, in 2011 he financed the expedition that located the shipwrecks of Sir Francis Drake.

Tickets to the Museum will run you $14, and we highly recommend you take advantage of the guided tour. The tour guides dress as pirates and really help the museum to come alive by answering questions, telling stories, and leading hands-on experiences. 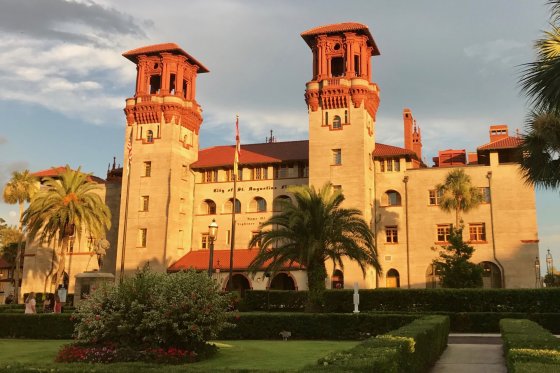 Directly across the street from the Ponce de Leon Hotel stood the Hotel Alcazar, also constructed by Henry Flagler in 1887. The Alcazar offered a cheaper alternative, but was still out of the reach of most Americans at the time. Our favorite part of the building was the “World’s Largest Indoor Swimming Pool” which was surrounded on the upper floor by a Casino. You can see the incredible pool in the image below, and just imagine what it must have been like at the peak of its popularity. 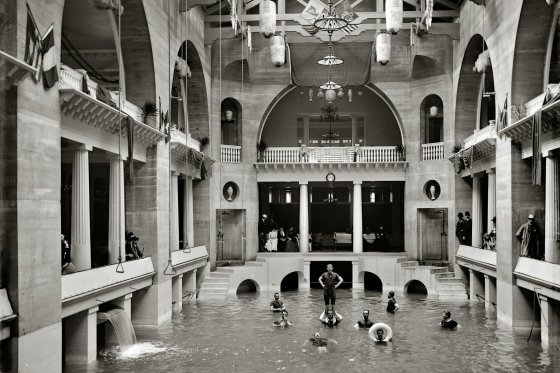 In 1947, the Alcazar was purchased by Chicago publisher Otto Lightner as a home for his extensive collections that he purchased from millionaires during the Depression. Originally called “St. Augustine’s Lightner Museum of Hobbies”, The Lightner Museum is home to one of the best collections of fine and decorative 19th century art in the country. Tickets are $10 and the Museum’s eclectic collection ranges from a mummy, shrunken heads, human hair art, cigar labels, buttons, salt and pepper shakers, to Tiffany glass, cut glass, porcelain, fine art paintings, furniture and sculpture. 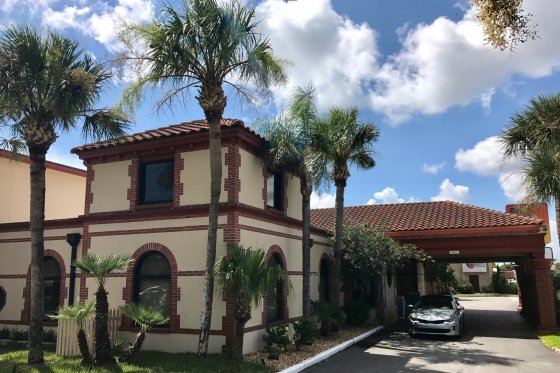 During our visit to St. Augustine, we were hosted at Jaybird’s Inn, and we couldn’t have picked a more perfect place to stay. Jaybird’s tagline is “Historic Outside, Contemporary Inside”, which is totally true as the exterior was influenced by the old Spanish architecture of Historic St. Augustine. Don’t judge this property by its cover though, as the rooms were completely re-designed in a recent renovation and are now fresh and modern. They really thought of everything and we highly recommend Jaybird’s for your visit to St. Augustine. 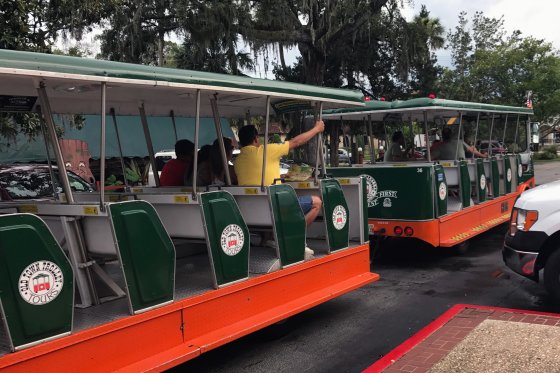 To get around the historic district of St. Augustine, we utilized Old Town Trolley Tours. For about $25 you get three consecutive days of hop on & off privileges at 23 stops. As the trolley navigates the city and saves you from walking everywhere, it also provides narration. So if you want to get oriented on the city quickly on your first day, you can ride the full loop, or you can just get bits and pieces of the narration while you navigate to your destinations. They even offer a free Shuttle to the Alligator Farm, Lighthouse and Beach. 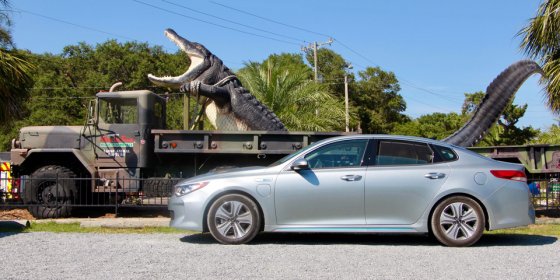 We drove about 1800 miles on our trip from Baltimore to St. Augustine, and spent less than $100 in gas thanks to the 2017 Kia Optima Plug-in Hybrid. Above we’re measuring the Kia Optima up against Gomek. The amazing crocodile was two feet longer, but not nearly as efficient.

Thanks to Florida’s Historic Coast, Jaybird’s Inn & Kia for hosting our trip.