Kanye West has certainly been hot in the news recently, after he interrupted Taylor Swift with a nod to Beyoncé at the MTV Video Awards. So we’ve made Kanye the subject of our latest “Fun with Google” article.

So we typed “Kanye West is” into the old Google machine to see what was suggested to us. It appears Google isn’t a huge fan of Kanye, as reflected by the results below: 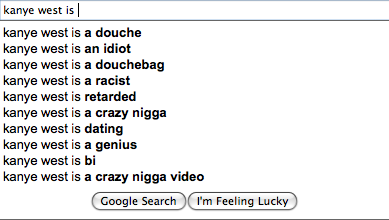 Onto our Kayne West featured search results. Here’s Kanye talking at a fundraiser, completely turning me off from ever donating to the Red Cross again:

I was also curious to know, what kind of a name is Kanye (\k(a)-nye, kan-ye\.), anyway? The search result that came up was from ThinkBabyNames.com, which says:

Kanye is an uncommon first name for men and an equally uncommon last name for both men and women. (1990 U.S. Census)