Like other words that have evolved (or devolved) over time, one that is thought to be the most vile in American history, “Nigger,” actually originated as a term used in a neutral context to refer to black people. That’s what I learned on Wikipedia today. But Gunaxin isn’t here to give you a history lesson, so if you want one then buy the book Nigger: The Strange Career of a Troublesome Word).

Websites about the word itself, not racist sites, will appear if you type this offensive word into Google. However, like other words, the Google Suggest feature falls silent.

However, nigga is perfectly okay apparently and Google has plenty of suggestions for web surfers who are looking it up. Here they are: 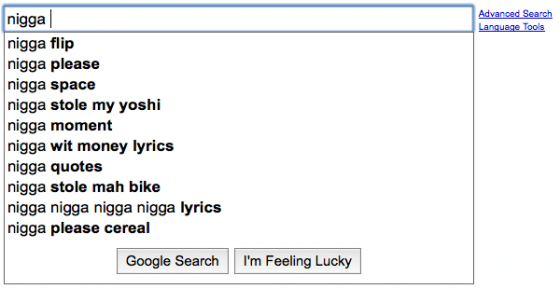 We have two featured search results, but the first isn’t from any of Google’s suggestions on the above list. It’s a Youtube video someone made with the song “Can a Nigga Get a Table Dance?” by 2-Live Crew, which was the Bunk Ten theme song at my Jewish sleep-away camp when I was a kid.

The next is from the search string nigga please cereal, which is a commercial parody that aired on HBO’s The Chris Rock Show.