Gadgets > Internet > Fun With Google: The Most Searched Gay Slur

Fun With Google: The Most Searched Gay Slur

According to indopedia.com, there are 89 common gay slurs. While Gunaxin does not endorse slurs against homosexuals (especially since we own the site topgaysongs.com), search engine trends top our list of curiosities, right behind boobs, beer, sports, humor, media and gadgets. For reasons we don’t know, people search for gay slurs, either alone or alongside other words. The search results on Google usually return definition websites that define these words as slurs, which I’m sure is more preferred by sensible people than anti-gay websites, or even pornographic ones (I assume).

Anyway, comparing the search traffic of the most common gay slurs, which I believe are ‘faggot,’ ‘fag,’ ‘queer’ and ‘homo,’ these results came to light: 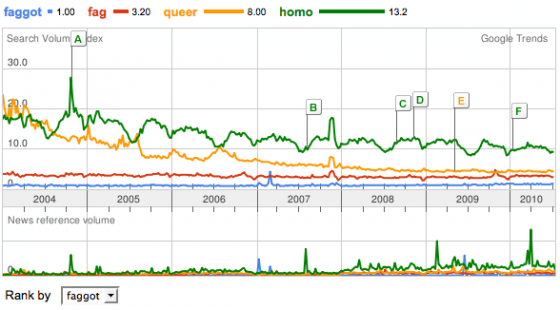 ‘Homo,’ which of course has a scientific term, leads the charge, getting 13.2 searches for each time someone searches for the word ‘faggot.’ In second place, with eight searches for every search for ‘faggot,’ is ‘queer,’ which technically means ‘odd or unusual’ but is now more commonly known as a slur against LGBT folks. Then comes ‘fag’ with 3.2.

So before we get too worked up over ‘homo’ winning this, let’s look at the home of the people who most frequently search this word: 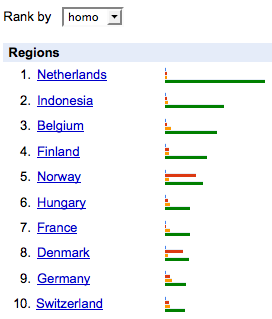 I don’t have time to get into the reasons as to why ‘homo’ trends so much more in Netherlands, Indonesia, Belgium, etc., compared to the other words, but I think it’s obvious that the results are distorted while comparing that word to the other slurs in the first exercise. Therefore, ‘queer’ is the likely winner. Hmmm. Unexpected. In the United States, ‘queer’ leads the charge, particularly in Massachusetts, Rhode Island, New York and Oregon.

Here are the other gay male slurs, some of which include the proper terms, such as ‘homosexual’ and ‘gay’ (which can be used in negative context). Others may be terms that homosexuals themselves use on each other to be funny (I’ve heard gay people call each other ‘cream puff’). Others are outright hilarious (“Frenchman?”). Stick them into Google trends and see how they compare to each other in the search engine world.