Fun With Google: That Thing on Rasheed Wallace’s Head 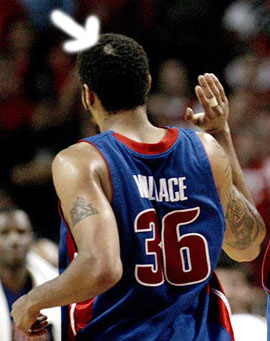 NBA technical fouls expert Rasheed Wallace retired after 15 years in the league. Wallace was best known for getting technical fouls (he’s the all-time leader), getting kicked out of games, and inspiring conversations about that thing on the top of his head.

After years of wondering, I’ve finally made it a mission to learn what that thing is using Google.

The first thing that Google suggests when searching for “Rasheed Wallace” is “Rasheed Wallace Bald Spot.” But also, Google knows what to suggest when you start typing “what is that thing on rasheed wallace’s head.”

Okay, now onto the answers.

The first result is from Yahoo Questions, where someone asked what it is, but users only provided smartass answers, like fungus, a white patch of hair, his brains leaking out, etc. I’d like to think it’s something more interesting than any of those. WikiAnswers says it’s a birthmark or a white patch of hair, as does ChaCha.com. Again, not helpful.

Then I found the answer from an article titled “Pilgrims flock to see Virgin Mary on Rasheed Wallace’s head.”

So there we have it. The answer. Anyway, you had a great career Wallace, and you left a mark of technical fouls in Washington, Portland, Detroit, and Boston. Enjoy retirement, ‘Sheed.