Gadgets > Internet > Fun With Google: Would a Man Rob God?

Fun With Google: Would a Man Rob God?

An infinite number of questions start with the words ‘Would a?’ You know, like ‘Would a woman take Viagra?’ ‘Would a brain transplant ever be possible?’ ‘Would a compass work on the moon?’

The Google Suggest feature in its search box limits the initial suggestions to the most important ones that need to be answered. In an effort to save you all time, Gunaxin will search for the answers for Google’s most popular ‘Would a?’ questions.

First, let’s take a look at the questions. Remember, these are the most important ones that people are asking. 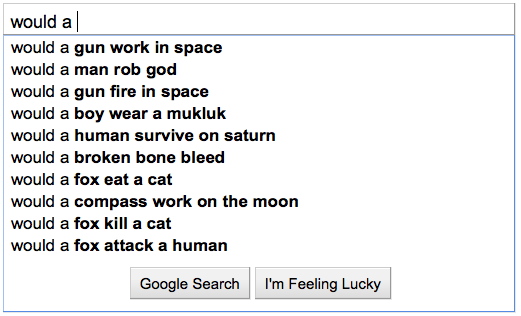 According to The Straight Dope, yes, a conventional firearm would work in space, because it does not depend on Oxygen.

Would a man rob God?

This is actually a biblical thing in Malachi 3:8. Will A Man Rob God? Yet Ye Have Robbed Me. Assuming your’re looking to read about it, you can on several sites, including this commentary on raptureready.com.

Would a boy wear a mukluk?

First, what is a mukluk? Boots. So, would a boy wear boots? Unfortunately, there isn’t a site that says yes or no, but it’s a safe assumption that yes, boys would wear boots.

Would a human survive on Saturn?

Wikianswers says humans cannot survive on Saturn because the atmosphere is too overwhelming and it is too cold.

Would a broken bone bleed?

According to Yahoo Answers, which seems to be the only remaining functioning feature on Yahoo, the answer is yes. “It has a rich matrix of blood vessels inside where the marrow is and when the bone breaks, the marrow is also disrupted and bleeds as a result.”

Yes, it is possible. But generally speaking, cats are too big for foxes to eat, and they’ll opt for something smaller. However, kittens are not too big.

Even better (though this has nothing to do with the question):

Would a fox attack a human?

It has happened, but rare. Again, Wiki Answers to the rescue.