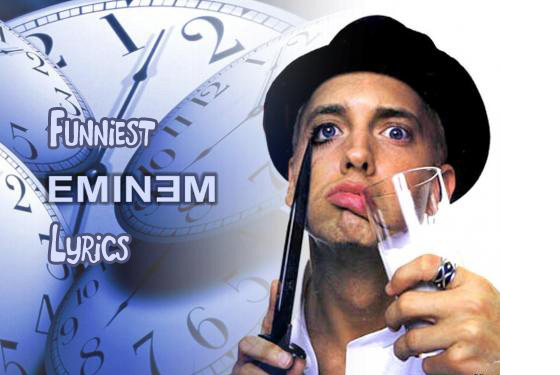 Being a stand-up comedian is perhaps one of the most difficult performing arts jobs there is, because making people laugh isn’t something that most people can do on stage. Being able to write rhyming poetry meant to be recited to music (aka rap), and having the vocal talents to do so is also something not everyone can do well.

Combine the two. What do we get? Early Will Smith.

Okay, so years later we realized that Smith’s early albums sucked. But now, there’s one guy who rocks us out and makes us laugh with every album he releases: Eminem.

Just a disclaimer. Eminem has a bunch of cheesy songs, many of which get popular real quick but ultimately aren’t his best stuff. Sometimes the jokes are lame, particularly when he rips on Christopher Reeve for no other reason than because Reeve rhymes with so many other words (which Eminem even admits in a song).

But when we break it down, song by song and lyric by lyric, some lines are right up there with “Who’s on First?” Okay, maybe not, but they’re funny, clever, and deserve to be listed. Know more? Put them in the comments. We’ll also show his funniest videos, which are basically the rap version of Pee Wee’s Playhouse.

If I ever gave a fuck, I’d shave my nuts
Tuck my dick in between my legs and cluck

My words are like a dagger with a jagged edge
That’ll stab you in the head
whether you’re a fag or lez
Or the homosex, hermaph or a trans-a-vest
Pants or dress – hate fags? The answer’s “yes”
Homophobic? Nah, you’re just heterophobic
Staring at my jeans, watching my genitals bulging (Ooh!)
That’s my motherfucking balls, you’d better let go of em
They belong in my scrotum, you’ll never get hold of em
Hey, it’s me, Versace
Whoops, somebody shot me!
And I was just checking the mail
Get it? Checking the ‘male’?

…they make it all up, there’s no such thing, like a female with good looks, who cooks and cleans…

Video: We Made You

Eh-heh, know why I say these things?
Cause lady’s screams keep creepin in Shady’s dreams
And the way things seem, I shouldn’t have to pay these shrinks
this eighty G’s a week to say the same things tweece
Twice. Whatever, I hate these things

Fellas grab your left nut make the right one jealous

also from “Just Lose It”

Sue: I’m twenty-six years old and I’m not married
I don’t even have any kids and I can’t cook
Eminem: I’m over here Sue, you’re talkin to the plant, look!

Video: My Name Is…

Like Eminem but don’t own any of his stuff? Get it from Amazon.

This is off the subject but still a funny video of Eminem with Jimmy Kimmel.