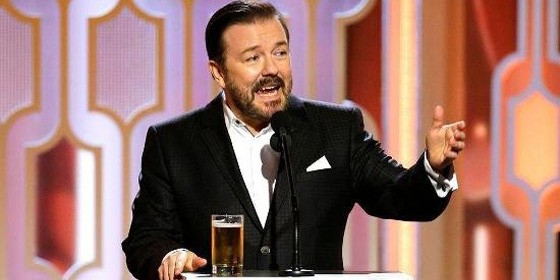 The 73rd Annual Golden Globes were broadcasted live on NBC tonight, January 10th. The second biggest award show that celebrates film and television has been making us laugh since 1958 when the show made its television debut. Since 2010, the Golden Globes have added a host, something they had done just once before, in 1995. They got Ricky Gervais to host the 2010 show and it was such a huge success, he came back again, in 2011 and 2012. He is back again in 2016 for his fourth time. Check out his hilarious opening monologue from tonight’s 2016 Golden Globe Awards :

The last three years the hosting honors were held by Hollywood’s funniest gal pals Tina Fey and Amy Poehler. The addition of a host added even more funny moments to an already long list of funny Golden Globes moments. Below we rank the funniest moments in Golden Globe history.

Kevin Kline, for those of you who probably don’t know who he is, was once one of the funniest men in Hollywood. He didn’t pass away, he just hasn’t had to work much after such a successful career and is enjoying life right now. For comparison’s sake, he was a modern day Ryan Reynolds of his time.

For a man who is known for being quiet yet subtle, Robert DeNiro’s 2011 acceptance speech was just plain hilarious. Not only does he poke at himself, he goes after the Hollywood foreign press and it was simply brilliant.

Following his performance in Borat, Sacha Baron Cohen has become one of the biggest actors in Hollywood. He was already one of the most intelligent men and has always spoken down to his peers making this speech as funny as it was dry.

You have to accept the fact that Kristen Wiig and Will Ferrell are funny before enjoying this clip. If you simply don’t like them, move along, nothing to see here. But as a fan, these two actors always make comedy where there is none.

Brendan Fraser was in The Mummy. He was also the GIF of the year in 2010 thanks to his utterly amazing clapping spasm.

Audrey Hepburn reminded us in 1990 that she was still one of the funniest people in Hollywood and decided to name all the people she wanted to thank in a very short time frame. It doesn’t seem as funny as you think but give it time and you might just find yourself laughing even more than we did.

The lines that weren’t in the script and catch everyone off guard usually make for awkward moments, not funny ones. This was a funny one.

Thank you to Tina Fey and Amy Poehler for doing a perfect job the last three years of hosting the Golden Globes. They were funny each and every time, nothing short of perfect.

Again, the subtle one-liners always seem to make the biggest impressions on our funny bones.

Robin Williams was a great actor but when he accepted awards, there was always an expectation that he would be funny that it makes you think maybe he won so many of these things because he was the best part of the show.

Being drunk is one thing. Being Emma Thompson drunk on stage at the Golden Globes is an entirely different and utterly amazing thing.

It isn’t often a Golden Globe winner thanks random people but Hugh Laurie found a way to do it while also making it funny. Did he truly have 180 names in his pocket?

It is hard to imagine a World without the funniest man alive, Robin Williams. Back in 2005, he won the Cecil B. DeMille Award and immediately had the room falling out their chairs.

For only having a host once, the Golden Globes made the best decision in their history by hiring Ricky Gervais to do it back in 2010 as it cemented his legacy and turned the show into one of the best on TV.

Andy Samberg was once just a guy on SNL. He has become one of the funniest people in Hollywood now that everyone is finally getting his sense of humor. We have enjoyed it for years, it is good to see the rest of the World getting on board.

Robin Williams helped solidify this moment as one of the funniest in Golden Globe history. It was great to see that celebrities are still human and need to use the restroom but it is so much better when they are in there when their name is called.

Many people forget that Dudley Moore was not just a great actor but he was one of the best humorists around. He turned a simple acceptance speech into a comedic performance that has become legendary.

No one expected the Golden Globes to bring Ricky Gervais back in 2011 following his destruction of Hollywood and the HFP in 2010. But they did, and it was even better than the first time.

Owning a room isn’t easy yet Robin Williams owned every room he walked into long before he even entered the room. He will be missed and this acceptance speech is one of his funniest ever. But not the funniest, no sir. He had one more that was better.

The Bill Cosby jokes are priceless but the best lines come towards the end when they play a fun game of naming who they would rather sleep with while also adding the reasons why, priceless.

There are very few actors in Hollywood that can say anything and get away with it simply because he has more charisma and charm than anyone else in the room like Robert Downey Jr can and did back in 2011.

After spending 2010 and 2011 completely disrespecting everyone in Hollywood, Ricky Gervais was brought back for a third time in 2012 to host the Golden Globes. Why? Because he was making viewers laugh and the ratings were going up each time he hosted. This might also be why they asked him to come back in 2016.

In their second time hosting, Tina Fey and Amy Poehler destroyed the opening monologue much like they did back when they dominated Saturday Night Live’s Weekend Update. It was brilliantly written and they made sure to touch each and everyone present that night. Even the biggest names.

By now you must be tired of hearing about Robin Williams but the man was truly one of the funniest people to live, ever. He could make comedy out of a napkin from his dinner table, literally.