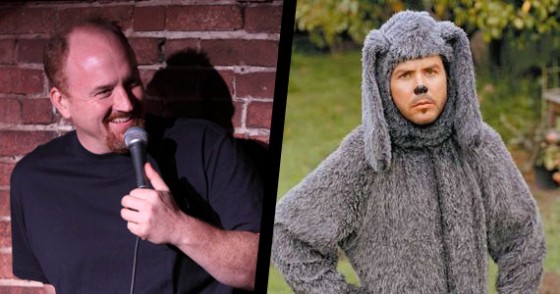 Great news for those of us who dig smart, irreverent television. FX has renewed both of its Thursday night comedies, Louie and Wilfred. If you’re not familiar with these shows, the former stars stand-up comic Louis C.K. playing a stand-up comic living in New York City raising two young daughters, while the latter is about an unemployed, suicidal  lawyer whose best friend is the next door neighbor’s dog, who he sees as a crude Australian man dressed in a dog suit.

I’ll admit, my descriptions don’t do either series justice. Louie is simply unlike any other “sitcom” I’ve ever seen. The social commentary and often cringe-inducing subject matter is deftly written and performed by C.K. He somehow manages to invoke Woody Allen’s films of the ’70s  and aspects of the French New Wave into almost every episode. Hyperbole aside, it really is a marvel to behold.

Wilfred one-ups Louie in the avant-garde department by having actor Jason Gann don a ridiculous gray dog costume and behave, well, like a dog. Elijah Wood (Mr. Frodo!) plays the straight man in this dynamic duo and often finds himself engaged in all manner of canine antics that include defecating in a shoe and humping a stuffed animal. I honestly don’t know what to make of it, but I find it hilarious and weird and compelling.