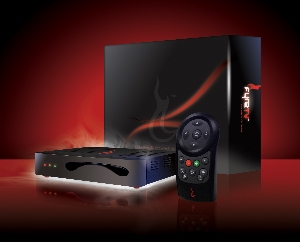 The FyreBoxxx hooks up to your TV and pulls content from the web via wi-fi or a network cable, and you keep everything you buy.  If you don’t want to shell out for the box, you can keep it to the computer and buy a 1 month, 3 month or 1 year rental plan that gives you minutes to use like some kind of perverted cell phone plan.  And yes, they roll over.

I thoroughly enjoyed my experience(s) with the FyreBoxxx.

As a self proclaimed pornnoisseur, I can say with a certain level of expertise that you will not be disappointed and will find it to your satisfaction on many levels.  There is a plethora of stars to choose from and an array of categories that made even me blush.   Hell, some of the categories had abbreviations I had previously thought were government agencies.  Upon first exploration,  so many movies pop up when you choose a category that it can be overwhelming.  Luckily, you can sort through the movies a number of different ways.  Choosing to sort them by “Rating” or by “Most Viewed” rarely left me disappointed.

After I flipped through a few of the ass flicks and a squirt flick or two, I was ready to dive headfirst into the one thing that sets FyreTV apart from your normal everyday free internet experience, the parodies. The selection of parodies on this system is unbelievable!  Nearly any TV show or movie that has ever been has a porn parody.  Being a huge Seinfeld fan,  I started with Seinfeld 2; a parody of “The Contest” episode.  It was surprisingly well done with the lead actor doing a  Seinfeld impersonation that was not half bad, a nearly identical set that rivals the stuff you see on Saturday Night Live.  I was amused for awhile, but disappointed to see Kramer on top.  Had they paid close attention to detail, they would have known that Kramer likes to always be on bottom, “Letting the woman do all the work.”  It was funny for a little while, but I have to admit that even I felt a little uncomfortable watching my favorite TV characters banging.