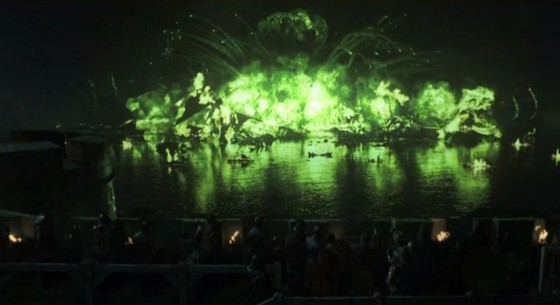 For the first time in two seasons of Game of Thrones, last night’s episode featured one storyline in one location, and with good reason. The battle for King’s Landing took center stage in season 2’s penultimate installment, aptly titled “Blackwater.” And what a humdinger of a brouhaha it turned out to be. I mean, I figured it would be awesome but not fist-pumping, jaw-dropping awesome. Kudos to writer George R.R. Martin and director Neil Marshall (Dog Soldiers yo!) for crafting one of the series’ finest hours of intense drama. It kicked copious amounts of ass, so much so that next week’s finale will have a hard time equaling the potency. Here’s how it all went down.

Whew! That was outstanding. No offense to the other Season 2 arcs, but I didn’t miss any of them one bit. Okay, I missed Arya. And I am still eager to see how the clusterfu*k in Qarth plays out. One more chapter and it’s a wrap. Until next time…