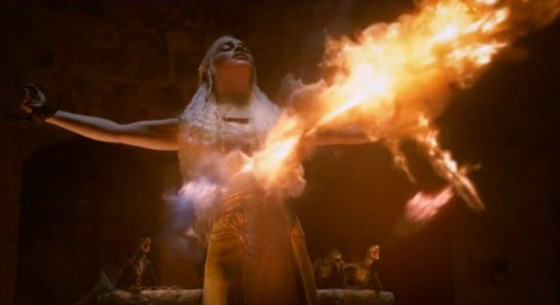 It’s over? Already? Rats! In my version of a perfect world, shows like Game of Thrones, Breaking Bad, Community, The Walking Dead and Boardwalk Empire air on a 24-hour, seven-day, 365-day loop. That’s utopia, for someone like myself who puts way too much stock in fictional characters on a small screen (is 42-inches still considered small?). Alas, my twisted brain isn’t behind the wheel. Instead, we are all at the mercy of short seasons and long hiatuses. Bummer. Where was I? Oh right, the season 2 finale of Game of Thrones, entitled “Valar Morghulis.” Was it as awesome as last week’s awesomeness? No, but prime rib makes an excellent substitute for filet mignon.

Overall, I’d give Season 2 a solid B+. It took a while to get going, but the last two installments really ramped up the action and drama. Will Tyrion rebound from his demotion? What will become of Robb Stark’s army now that Winterfell is gone? What’s the deal with Stannis and his witch? Can Daenerys make it across the Narrow Sea? Is the Night’s Watch totally screwed? Sadly, we have to wait another year to find out. Until then…