Game of Thrones Characters in the Eighties and Nineties Era 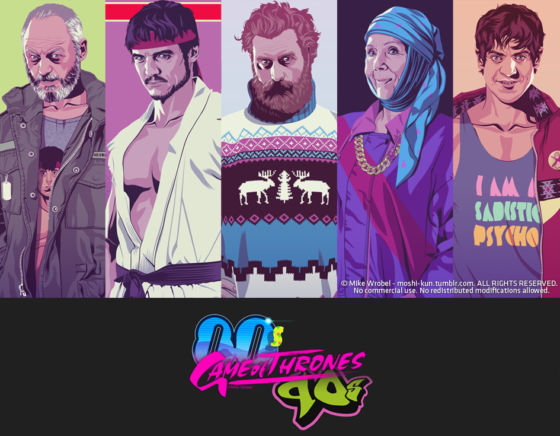 With the Game of Thrones final season beginning this weekend, we wanted to celebrate by sharing some Fan Art with you. For such an important occasion, we’ve selected one of our favorite fan art projects, the 80s/90s Era Character illustrations by Mike Wrobel.

What would “Game of Thrones” have looked like if the action had been set in a contemporary period such as the 80s and 90s? What if swords, bows, spears and armors had been replaced with some NES guns, bats and tracksuits? This is a fun project I’ve recently started, imagining all the characters fighting for the throne in a 80/90s grunge/gangsta/hip-hop era.

He has been working on the series for a few years, and he’s currently at over 30 characters rendered in his signature style. You can keep tabs on the series and his other awesome work on the Moshi-Kun Tumblr page.