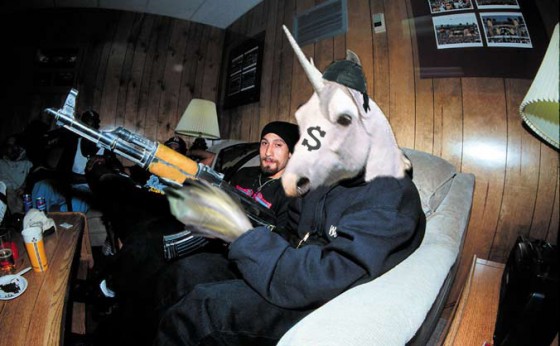 Life ain’t nothin’ but bitches and money. Yo, listen up fantasy ballers and shotcallers. Gangsta Unicorn is here to drop science ’bout who to start and who to sit fo’ Week 3. I’m straight outta legend and myth so I know my shit. If you want more Benjamins pay close attention. If not, take your punk-ass back to the crib.

I’m on the path to redemption after benchin’ Cam Newton and backin’ Ced B last week. Let’s get crackin’.

Ryan Fitzpatrick (vs. NE) – Ivy League boy is all that. Gonna need to air it out with cash money Brady and the Pats rollin’ up mad points. Fitzy ain’t the second comin’, but he’ll be aight in this one.

Daniel Thomas (@ CLE) – Reggie Bush be buggin’. DT is lookin’ fresh. Brownies D got jacked on the ground by Ced B and da Colts weak ass backfield. 80 yards and trip-six, yo.

Deion Branch (@ BUF) – Branch is blowin’ it up and now he gets a Bills D that got whipped by da Silver and Black. Aaron Hernandez is out with a bum knee, so Branch is gonna represent. Foreals.

Fred Davis (@ DAL) – Cowpokes better recognize my man Fred D is straight gully. He got mo’ points than Gates, Finley, Clark and Vernon. Get him in your lineups. Booya!

Chargers D/ST (vs. KC) – Chiefs be nothin’ but a bunch of wankstas. Motor City Cats laid a major beatdown on ’em last week. Expect the Bolts to do the same.

Eli Manning (@ PHI) – Check these stats, yo. Eli has tossed nine interceptions in his last four versus Philly. Iggles got an ill secondary with Nnamdi and Asante. G-Men got one healthy wideout. Do the math, bitches.

Joseph Addai (vs. Pit) – Nobody runs on da Steelers. Gangsta Unicorn hate to dis Addai, but Indy’s offense gonna have to do some serious hustlin’ to score.

Denarius Moore (vs. NYJ) – Welcome to Revis Island, youngin’. You ’bout to get schooled by the best in da game. Holla!

Brandon Pettigrew (@ MIN) – Big Grew be MIA. Five catches in two games is wack. Leave ’em on the pine until he starts earnin’ his cheddar.