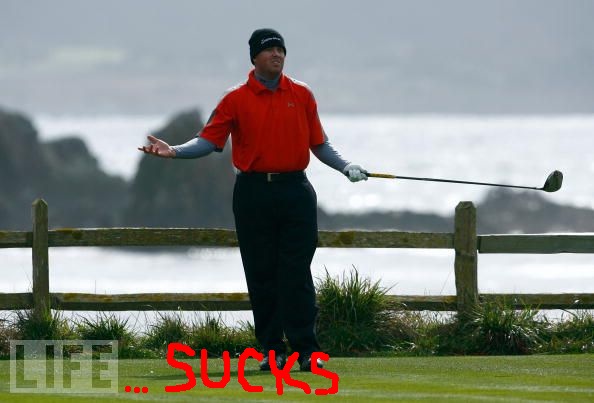 Not since Jean van de Velde’s tragic foray into the tangled fescue of Carnoustie’s 18th hole have we seen such a disastrous attempt to close out a golf tournament as poor Robert Garrigus’s 18th hole triple-bogey trainwreck at Sunday’s St. Jude Classic in Memphis, Tennessee. With a three shot lead going in to the final hole Garrigus decided to to take his foot off the gas and, instead of playing with the aggressive style that got him to the top of the leaderboard, tried to baby a hybrid iron off the tee in hopes of simply hitting the fairway. In a shot reminiscent of those your buddies take after a few beers during your weekly foursome, Garrigus chunked the first of his eventual seven strokes into the water hazard, necessitating a drop just short of the hazard for his third shot. You can watch the ensuing carnage below:

Now, as terrible as that was, adding insult to injury is the poor color selection of Garrigus’s pants that day. If you look closely at the follow-through of Garrigus’s first two swings (at 0:53 and 1:18) it looks like he has CRAPPED HIS PANTS. We’re not saying that he actually did, as the temperature in Memphis that day was about a million degrees and the stain could simply be an excess of sweat. However, after mangling your tee shot so badly with a three-shot cushion leading up to what should have been your first win on tour, no one would blame you if the horror of the moment caused an involuntary bowel “event”.

Perhaps if Garrigus had worn a darker shade of golf pant, there wouldn’t be any need for this intellectually stimulating debate. Not up for debate is the fact that Garrigus, eventually losing in a three man playoff, most certainly shat the bed, if not himself.