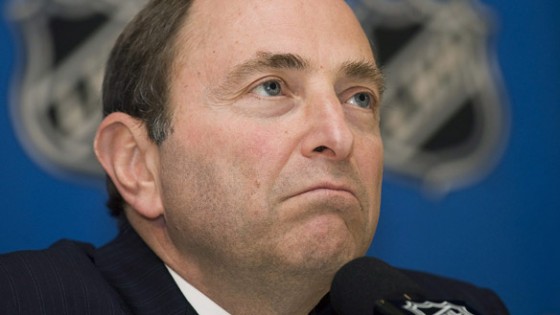 Not since watching a marathon of the British version of The Office have I seen something so squirm-worthy as Ron MacLean pelting NHL commissioner Gary Bettman with questions in between periods in last night’s Flyers/Blackhawks Game 3. For a guy who’s reviled by hockey fans everywhere, Bettman’s not doing himself any favors going on the CBC and answering every question like he’s been caught taking upskirt photos with his shoe-cam. Bettman’s body language and contentious interruptions suggested a man trying to convince himself as much as he was trying to sway MacLean and the viewers in his efforts to deflect any of MacLean’s questions regarding the health of the NHL in the southern U.S. states. And while Maclean obviously had an agenda going in, Bettman sounded like the weasel lawyer he is:

Maclean: I think the players might wonder why you don’t go into Southern Ontario because it could be so profitable.

Bettman: What inside of you compels you to want to go in that direction, because I don’t think our viewers are that interested in the franchise status.

Yeah, why would Maclean ask the commissioner of the league questions about the future of the league when we can get his informed analysis of the game being played instead? Granted, MacLean’s insistence  in trying to steer the whole interview toward expansion in Canada (a prospect Bettman has proven unreceptive to) may have been premeditated, but Bettman’s defensive stance and sputtering denials made for a very uncomfortable viewing experience. The whole thing reminded me of that SNL skit with Martin Short as the oily attorney being grilled by Harry Shearer’s Mike Wallace (sorry about the quality, it’s all i could find):