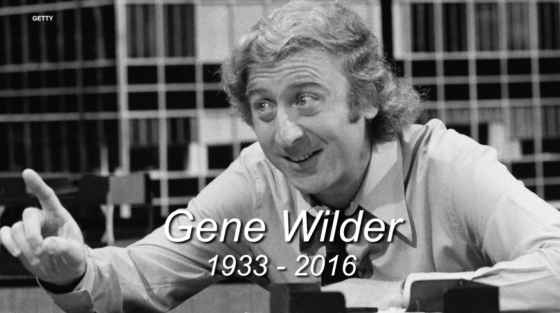 “I never used to believe in fate. I used to think you make your own life and then you call it fate. That’s why I call it irony.” – Gene Wilder

Everything that Gene Wilder accomplished during his time on this planet belongs to the moment Mel Brooks took a risk and selected him to portray Leopold Bloom in the 1968 movie The Producers. He ended up receiving an Academy Award nomination for Best Supporting Actor because of that break. It’s rare to come across anyone that turns their first true acting experience into an Academy Award nomination but Gene Wilder was so brilliant as Leo Bloom that it was more upsetting when he didn’t win.

It wasn’t long before the movie roles started pouring in and Gene became known as one of Hollywood’s best actors, comedy or drama. His legendary comedic pause is something studied today by aspiring film students all across the country. He had a way of owning a moment during a film that most people would say their line and movie on, waiting for the laugh. He slowed things down and turned a simple joke into a moment full of anxiety and anticipation from the audience. That comedic pause along with his ability to go from calm to chaotic in just a few seconds turned him into a one-of-a-kind Hollywood legend.

In honor of his recent passing, we wanted to give him the greatest honor of them all, showcasing his most hilarious Gene Wilder moments.

Yes, this is a tribute to Gene Wilder and this clip doesn’t really give us much of his portrayal of Leo Bloom. However, thanks to copyrights and legalities, we couldn’t find a clip to show you. This movie had many too. From the blue security blanket to the name calling scene, The Producers was a perfect first film for Gene Wilder and laid the foundation for the rest of his career.

Start the Revolution Without Me

Another performance that most people haven’t seen but should was Start the Revolution Without Me. Gene played two roles, Claude and Philippe, a set of identical twins born from two different sides of society. It is one of his funniest performances that you haven’t seen yet.

Many people forgot about his appearance in the 1972 Woody Allen comedy because he was only in the film for the one joke about an Armenian patient of his that slept with a sheep. Just watch the entire scene and imagine anyone else playing Doctor Ross and not coming off creepy. Gene Wilder just makes it work.

Gig Young was the original actor Mel Brooks hired for The Waco Kid. However, during the first scene where we meet The Waco Kid, he was supposed to be hungover in his cell. Gig battled with alcohol for a long time and was sober when the film began but fell off the wagon and ended up collapsing on set during this scene. Mel Brooks called Gene Wilder and asked him to fly in the next day and play the role. Gene was set to fly out to London the next day but dropped everything and took on the role. It was fate and ended up leading us to the next great comedy from Mel Brooks, Young Frankenstein.

All it took was four words, “Put the candle back,” and this scene became one of the funniest in the movie. Maybe it was the dry, almost sarcastic way in which he tells her to do it that made this shot so memorable. Or maybe it was just another one of those amazing Gene Wilder moments that remind us of just how great of an actor he truly was over his long and impressive career.

This was the first of four movies that paired Gene Wilder and Richard Pryor. No one knows how or why this pairing worked but somehow these two men were perfect for each other and it showed in this one. This scene originally had a white man walking into the bathroom believing Gene Wilder was black but Richard Pryor protested and said it would be much funnier if a black man walked into the bathroom and was fooled so they ended up using his idea in the final cut.

Only Gene Wilder could pull this performance off. His reputation turned his character into someone we could enjoy and laugh our asses off when he becomes enamored at the site of a woman’s big breasts and instantly turns into a silly immature kid.

Before Jim Carrey and Jeff Daniels turned Dumb and Dumber into a legendary goofy comedy, the duo of Gene Wilder and Richard Pryor were killing us all on the big screen. It started with Stir Crazy and this amazing scene where they find out that they are going to be in prison a long time. Their reactions fed off the other and created one of the funniest film moments for both men.

As funny as these scenes were, the best part is the fear in Richard Pryor’s eyes. When filming the prison scenes, they were in a real prison in Florence, Arizona where Pryor was not liked, so he was terrified for his life unless the prison had real guards with real guns. In this scene, notice the guards and their weapons, those are all real. Pryor was also always looking around and over his shoulder during the film. It was also mostly ad lib here making Gene Wilder and Richard Pryor a perfect pair.

This was one of three films in which Gene Wilder co-starred along side his wife, Gilda Radner. Hanky Panky was actually the film where the two met for the first time and immediately became best friends before eventually becoming a couple. It is amazing how much better a movie is when Gene Wilder has a co-star that can bring the same level of hilarity as he himself can bring.

The Woman in Red

Gene Wilder had some of his better moments when he was able to open up and be himself. Like in this clip, for example, when Charlotte, played by Kelly LeBrock, walks over an industrial fan and immediately starts dancing to the music. Gene waits in his car and once she walks off, he chases after her but not before seeing for himself if the fan was actually as great as Charlotte just made it appear. He gives us about 3 seconds of a dance and the scene is over. But it was moments like that which made him such a great actor. The little things separate the good from the great, in acting.

See No Evil, Hear No Evil

If we could just put this entire movie here, we would. Gene Wilder plays a deaf man that doesn’t like it when other people treat him as such and Richard Pryor plays a proud blind man with the same problem. This is just one of many scenes that were hard not to laugh at.

Instead of putting 45 different videos of all of the best moments in Willy Wonka & the Chocolate Factory, we decided to just give you a chance to see all of the moments that turned Gene Wilder into a Hollywood legend.