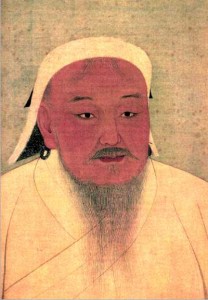 Sadly, a tragic death was reported today. Born under the unassuming name of Temüjin, the man who would later be known as Genghis Khan, was found dead near his horse today under what some consider ‘speculative circumstances.’ Some call his death tragic and untimely, while others argue that the guy had it coming to him -thanks in part to his bod being festooned with battle wounds. Though the leader of the Mongolian nomads had succommed to a bout with pneumonia, it is as yet unclear weather or not this contributed to his demise. Discovered in the early morning of August 18th by his brothers, Khasar, Khajiun, and Temüge, and his sister, Temülen, the badly wounded and bloated corpse of the heroic Khan lay in the grass mere feet from his trusty steed, a leg slightly akimbo indicating a possible break from a fall. None of the family was especially surprised as, said Khajiun, “He often rode his horse no-handed while tossing his weapons around, willy-nilly.”

The history of Genghis Khan is rich with historic significance. As a Mongol, Khan’s chief adversaries around the year 1200 were the Naimans to the west, the Merkits to the north, Tanguts to the south, and the Jin and Tatars to the east. Unfortunately for the charismatic and well-spoken soldier, he struggled to unite many of the more nomadic and loose sects of the Mongol hoard, especially the Naimans, Merkits, Uyghurs, Tatars, Mongols, and Keraits… many of the same people he often fought against. But luckily, his tendency to make threats like, “You ass-hats are off my Christmas list if you don’t comply”, and the famous line, “I will never stop bedding any of your mothers unless you be my friends”, helped solidify the loose ends and soon he became a great leader of the combined tribes. Eventually, all of the following Dynasties around China would fall to his iron fist, lashing tongue, and wicked chain-saw hand: the Xia, the Jin, the Khwarezmian Empire, and the Mongols as a whole. As it turned out, Genghis Khan turned into a raving lunatic who was completely insane. No one saw it coming.

He will be missed and a funeral is planned for Friday, August 21, 1227 at the Great Wall Final Resting Parlor located next to the Khorasan Laundry. Refreshments will be served in little white boxes afterward. All are forced to attend.

May Genghis Rest in Piece, until Keanu Reeves needs him for a history report: