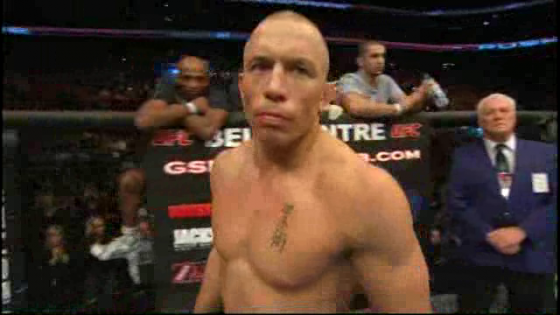 The evil man doing this

This is Georges St. Pierre, or GSP as he’s lazily known. GSP is the UFC Welterweight Champion, a title he’s held since UFC 83 where he defeated Matt Serra with a second-round TKO. He hasn’t lost a fight since UFC 69 when Serra shocked the world and knocked him out in the first round. Since that fight, he’s defeated eight straight opponents, four of which are in Sherdog’s top ten rankings for welterweight, including the boys listed second, third, and fifth (twice).

St. Pierre is, obviously, the top dog on that list and by most people’s accounts one of the top three pound-for-pound fighters in the world. He can beat you wherever he wants, be it on the ground or standing. He hasn’t lost a round since UFC 74, where Josh Koscheck won the first round of their fight in a borderline call.

But its not just that GSP beats his opponents. It’s the WAY he beats them. He doesn’t  just edge out a close decision. He dominates his opponents. He manhandles them. He absolutely and utterly annihilates them and makes sure they’re a different fighter from when they stepped into the cage with him.

Now, a look at some of his handiwork. 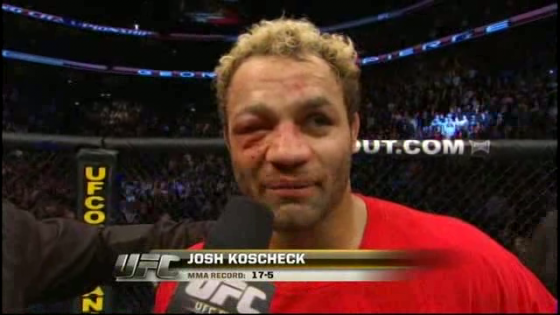 This is Josh Koscheck. St. Pierre won a decision over him back in 2008. On Saturday in GSP’s hometown of Montreal, Koscheck got absolutely destroyed. GSP broke Koscheck’s orbital bone in the first round, and jabbed and leg kicked him to death all fight long. According to FightMetric, St. Pierre outstruck Koscheck 136 to 30. Koscheck’s will was completely broken after the third round, and he was outlanded  45 to 7. Imagine landing seven strikes in 10 minutes of action that was primarily contested on the feet.

More importantly, it was the complete destruction of someone who talked shit and ran mouth during the 12 weeks of the Ultimate Fighter TV show this fall. 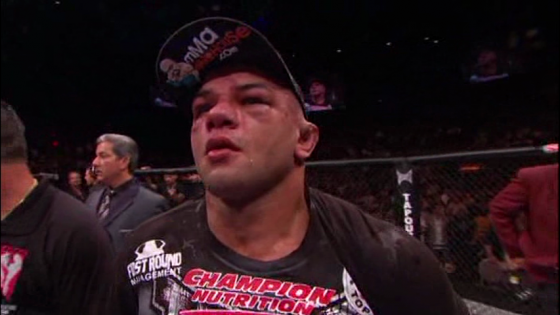 This is Thiago Alves. He got his title shot against St. Pierre by viciously knocking out former welterweight kingpin Matt Hughes, and making a fool of Koscheck for three rounds. St. Pierre outstruck Alves by a ratio of more than two to one, and took him down ten times in the fight. The dangerous Brazilian was proven a fool time and time again by the champion. His face looks that bad, and this wasn’t nearly as bad as some of the other fights St. Pierre has been in. 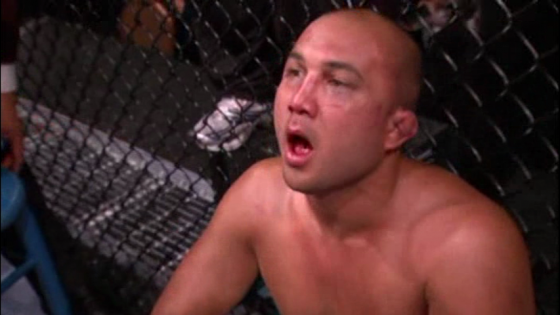 Lightweight god, out of his league

This is BJ Penn, considered the best lightweight in MMA history by many. He got bored of the lightweight division and jumped up in weight to fight St. Pierre at the UFC’s SuperBowl show in 2009. St. Pierre took Penn down in each round, beating the everloving bejeezus out of him. He outstruck him nearly five to one, most of those shots being on the ground to the face of Penn. The Brazilian jiu-jitsu black belt was out of his league here against the welterweight god. 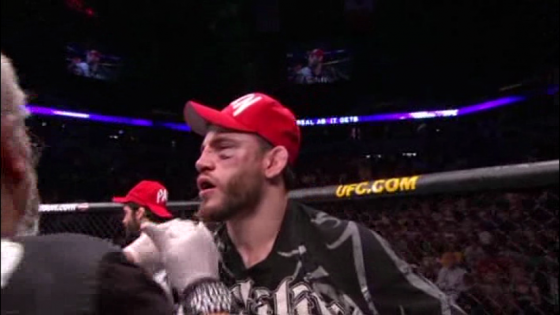 Even GSP couldn't make him exciting

This is Jon Fitch, who many fans call one of the more boring fighters in the welterweight division. He’s a wrestler by nature who doesn’t finish a whole lot of fights. St. Pierre is also a wrestler, but he’s a wrestler who employs fists to grind his opponents down to a pulp. Fitch just… well… he lays on them. He wrestles, like its the fuckin’ Olympics.

GSP doesn’t do the Olympics and, instead, laid the smack down on Fitch. He pounded him so badly, one of the judges gave St. Pierre a 50-43 decision, which consists of a pair of 10-8 rounds, rarely given out by major judges. A 10-8 round is given when a fighter absolutely runs through his opponent, who puts up no defense.

GSP got two of them in that fight. 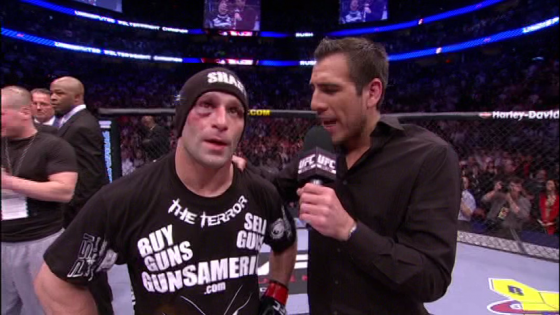 The man GSP beat for the belt

This is Matt Serra, the man who stunningly knocked out St. Pierre to win the welterweight title. This loss cramped the UFC’s plans for St. Pierre for a year, but it resulted in the promotion debuting in Montreal where they drew a then record crowd, all rabidly cheering for their favored son.

St. Pierre didn’t make the mistakes he did in the first fight, defeating Serra with a second-round TKO with knees to the body. Like Penn, Serra is a natural lightweight who only moved up in weight to take part in Season Four of the Ultimate Fighter, with the show’s winner guaranteed a title shot.

Serra has taken that upset win over GSP and carved out a nice little niche as a fighter in the welterweight division. He’ll never reach the level of champion again. 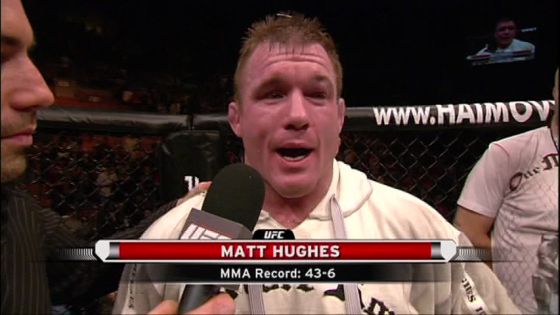 This is Matt Hughes, the former UFC welterweight champion. He defeated St. Pierre the first time they fought via first-round armbar at UFC 50. GSP was a 23-year-old rookie then and has admitted in interviews he was in awe of the legendary Hughes. Five straight wins would give St. Pierre a second shot at Hughes at UFC 65, where he dominated the legend, knocking him out in the second round with a head kick and a barrage of punches.

After Serra’s upset over St. Pierre, he coached versus Hughes on the Ultimate Fighter with a showdown on the UFC’s year-end show of 2007 lined up. Serra was forced to pull out with an injury and St. Pierre stepped in to fight Hughes on short notice for the interim welterweight championship. GSP dominated Hughes for two rounds before nearly ripping his arm off at the end of the second round to get some form of gold back around his waist.

Hughes hasn’t been the same fighter since that second loss, now fighting on what people are calling the “legends tour”, against fighters who are his age and in the twilight of their careers.

Georges St. Pierre is a dominant champion in the UFC that cannot be compared to any athlete in any sport currently playing. No one is running through the competition like St. Pierre (UFC middleweight champion Anderson Silva may be the only exception). A fight between the two looms as one of the most compelling in UFC history… if it happens.