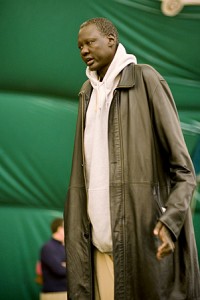 NBA tall-man legend Manute Bol suffered acute kidney failure on his return to the US from Sudan last Wednesday, a Facebook group reports.

According to the site:

Manute is currently in a Critical Care Unit at a hospital in Northern Virginia. He has now had two dialysis treatments, and his blood levels are showing improvement. A reaction to medication given him in Africa has caused Stevens-Johnson Syndrome, causing upper levels of his skin to separate. The hospital is looking to transfer him to a burn unit.

Bol, who played mostly in the 80s for the Bullets, Warriors, and Sixers, holds a couple of NBA records in the blocked shots category. He answered Gunaxin’s 6Q last year and I had the pleasure to meet him. Thanks to Busted Coverage for the heads up.