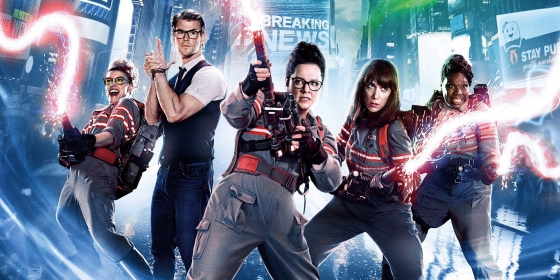 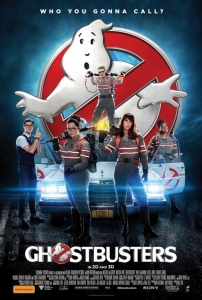 A task as daunting as remaking/rebooting a venerated property such as Ghostbusters is pretty much fraught with peril and almost certain to fail from the jump. Fans of the original cry out, “Why another pointless remake?” “Too soon!” “Leave Ghostbusters alone!” “This is what’s wrong with Hollywood – there’s nothing original anymore! Everything’s a remake these days!”

Keep in mind that the beloved 1982 version of The Thing starring Kurt Russell, True Lies, 12 Monkeys, 1978’s Invasion of the Body Snatchers, and The Departed are all remakes. And True Lies was released only 3 years after the original, La Totale! came out in 1991. 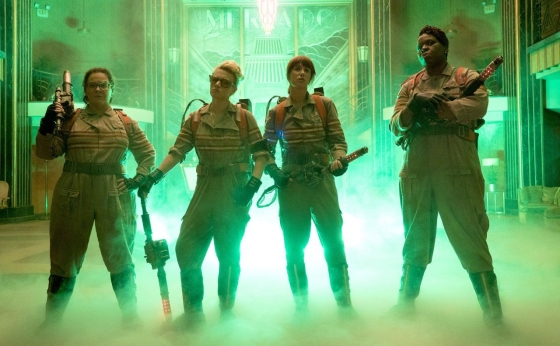 So without further ado, let’s get right to it: the 2016 update of the 1984 classic Ghostbusters is way, way fun. Was it necessary? Probably not. However, this retooling of the tale of four ghost-trapping paranormal researchers is a success in that it stands on its own, relying on the leads – not the legend – to carry the film. Sure enough, there are plenty of callbacks to the original (speaking of which, be sure to stay until the end of the credits), but there are a lot of diversions and aversions from the original to help it forge its own path. 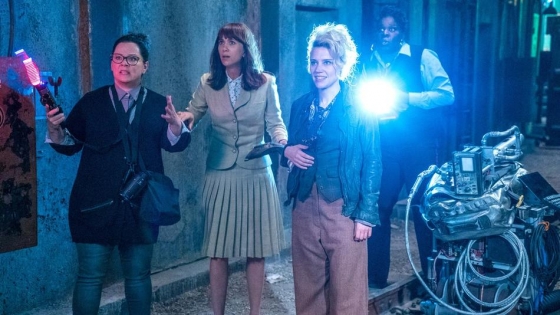 We’d first like to tackle the biggest diversion from the original, which everyone’s been talking about since the casting announcement went out – the gender reversal of the main roles. Nothing else needs be said except it works. Each of the leads – Kristen Wiig, Melissa McCarthy, Leslie Jones, and Kate McKinnon (who straight-up ganks the movie from underneath everyone) – knows exactly what they’re doing and gives it their best, resulting in wonderful comedic and personal chemistry that practically jumps off the screen. 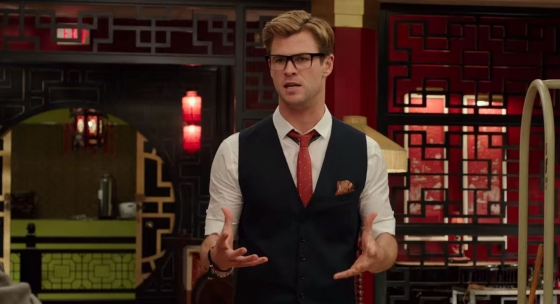 It’s an entire reversal, so terrifically personified and parodied by not just the female leads, but with the appearance of Chris Hemsworth as the airheaded Kevin, the Ghostbusters’ new receptionist. That he’s written as dumb makes the exaggeration complete; he’s a superficial representation of how women were treated in ‘80s films and beyond. 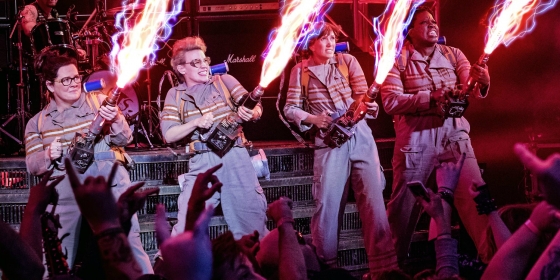 Co-writers Katie Dippold and Paul Feig (who also directs) combine the best of the original 1984 film (represented by the creation of the Ghostbusters team) and its 1989 sequel (someone tries to raise spirits for their own personal gain) with a little bit more character depth thrown in as a story hook. Granted, there aren’t many easily-quotable catchphrases or memorable lines (“Ray, if someone asks if you’re a god…”), but that’s how modern comedy works; the film is more about the moments and the loyalty between co-workers and friends. It’s a raucous celebration of everything we want to see: four women lighting up spectral vapors with their proton packs and kicking ass while still finding time to be funny. 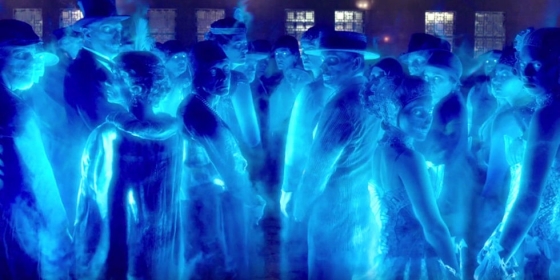 You’ll find the Ray Stantz (Dan Aykroyd) and Peter Venkman (Bill Murray) dynamic has taken on a new twist with Dr. Erin Gilbert (Wiig) and Abby Yates (McCarthy). Erin’s about to make a bid for a tenured physics professorship at Columbia University when a skeleton from her past comes out of the closet; many years prior, she’d written a foolish book about the paranormal with her former best friend Abby. After disowning the book (and Abby, as it seems) and forbidding Abby to republish it, the paranormal brings the two of them together again, reopening old wounds which are almost immediately cast aside due to a Class 4, full-torso, roaming, malevolent vapor (read: scary ghost) causing havoc and spewing ectoplasmic goo (it’s not specifically called “ectoplasm” in the film, but you know what it is) all over Erin. 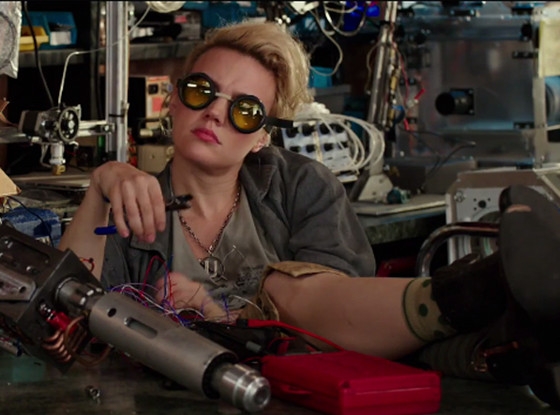 Along with tech goddess Jillian Holtzmann (McKinnon), Erin and Abby reopen their investigations into the paranormal, gaining a fourth member, Patty Tolan (Jones) after an encounter with a prison uniform-wearing ghost scares her out of her New York MTA job. Holtzmann’s prodigious creativity and hilarious attitude net them new weapons in the fight against the unnatural; think of her as a hardcore, punk-ass Q from a James Bond movie who may be a little out of her depth with what she’s making, but she gleefully doesn’t care. Patty’s not just there to deliver one or two lines on the side; she brings an encyclopedic knowledge of New York City history to the table, as well as one of her uncle’s hearses (he works at a funeral home), which Holtzmann turns into the famed ECTO-1. 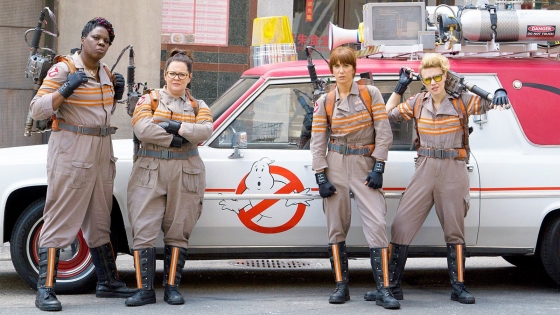 Replacing the romance of the first film is the rekindling of the friendship between Erin and Abby. We see a lot of sniping going on between them in the early goings, but it mostly gets set aside once the specters come roaming the streets of NYC, only to be picked up at a crucial moment toward the end. It’s a little lazy, but it serves its purpose. Also, the third act comes and goes almost as quickly as it did in the 1984 original, with another large building being the epicenter of this new spate of activity. These, and the overuse of Ray Parker, Jr.’s “Ghostbusters” song (not only is it incorporated as a leitmotif of Theodore Shapiro’s score, there are no less than three different versions of it – remixes, covers, and reimaginings – spread out over the film’s running time) are probably the only things wrong with the movie. 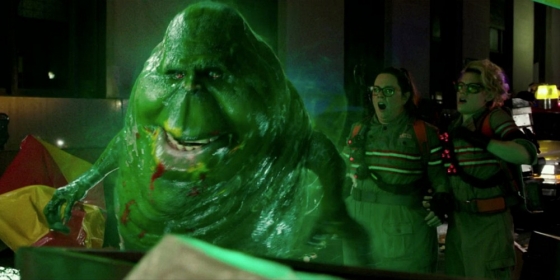 What Ghostbusters gets right is everything else, quite frankly. The special effects will astound and amaze, at once being both modern and a throwback to the 1984 film; Slimer and the other ghostly apparitions never looked more realistic. But the real special effect is Kate McKinnon, who winds up being Ghostbusters’ centerpiece. She is neither overused nor underused; she drops in when she needs to and glides right back out of frame again when it suits her. However, you learn to celebrate the moments when she’s onscreen, as she either punctuates the scene with a well-timed (and well-edited) reaction or owns the scene outright by being the devil-may-care badass she is. She’s so much more than just an Egon Spengler (the late Harold Ramis) analog; she is the beating heart and soul of this movie. Actors may inhabit certain roles like Daniel Day-Lewis does, but McKinnon fits this role in such an inexplicably hilarious way, you can’t imagine anyone else having the ability or the guts to dive straight into a role which seems tailor-made for her. 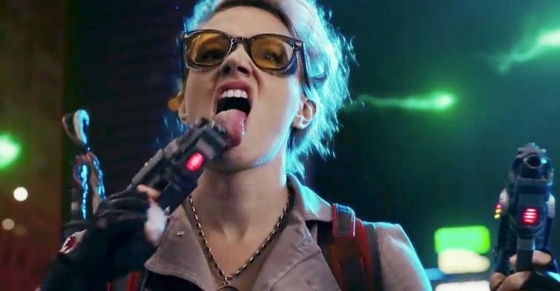 I applaud the movie for not taking any easy, stereotypical way out, where the women are shrill, screamy, and talk about men incessantly; this iteration of Ghostbusters showcases these leads having brains, compassion, and courage. This comes to the fore when they figure out why these ghosts are suddenly appearing and why the villain, Rowan North (Neil Casey) is making all of this happen. When all hell breaks loose, and the Ghostbusters fire up their equipment and get to doing what they’re been born to do, you’re not going to want to miss a single minute of it.

Let’s get right to it: the 2016 update of the 1984 classic Ghostbusters is way, way fun and showcases its leads having brains, compassion, and courage.