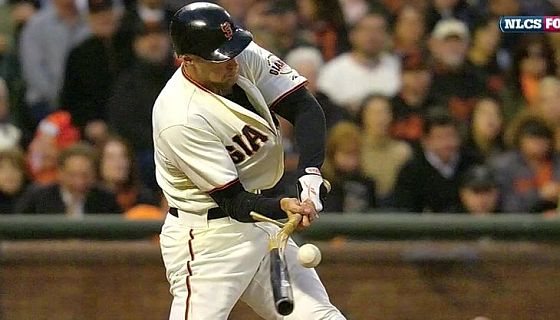 The San Francisco Giants completed an improbable comeback to advance to the World Series last night with a 9-0 win over the St. Louis Cardinals. One of the biggest blowouts in game seven history was thanks in no small part to a bases loaded double by midseason pickup Hunter Pence. Those three RBIs, Pence’s first of the series, put the Giants up to 5-0, an insurmountable lead with Matt Cain at his best.  More incredible was that Pence laced the double with a bat that shattered on impact, and actually hit the ball three separate times in one single swing.

Our friends over at SBNation broke it down in gif form, showing the moment of impacts.

The ball managed to make it to the outfield thanks to some elusive movement as it approached Cardinals’ shortstop Pete Kozma. Much like a trick pool shot, Pence managed to put enough English on the ball with his unique swing that the ball changed direction in mid air.

This wasn’t the only broken bat hit to make headlines this season. During the regular season Orioles first baseman/outfielder/reliever Chris Davis managed to put a broken bat hit over the outfield wall.