The night started of as is usual for me and outings – with a little rain. At least it wasn’t the downpour of my first visit to Sir Edmond Halley’s.

Three of my lady friends joined me at Sir Ed’s for a much-needed Girls’ Night Out dinner. It was a little quiet at first, as the other three only had me in common, never having met before, but by the end of the evening, they were laughing and having a great time. 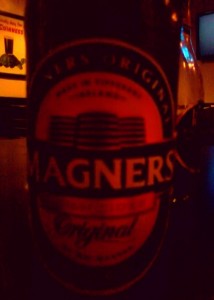 I started off with a bottle of Magners Irish Cider. Seeing “Made In Tipperary” on the label, I knew I had made the right choice. 17 varieties of apples, pressed, filtered and fermented for up to 2 years. It was just as yummy as I thought it would be. 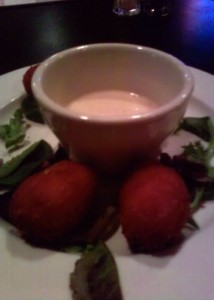 Then came the appetizer. My bestie ordered her favorite, the Butternut Squash Croquettes, so that we could all try them. They’re not BAD, but I’m just not a fan. And they look like… well… you see the picture. You know.

After the appetizer, we decided on entrees. One got a black bean burger. The other got cheese fries. Another for fish and chips. Me, I ordered the Shepard’s Pie. 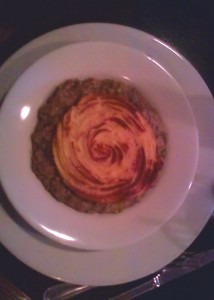 Now, I knew it was made of lamb, but I thought I would brave it anyway, owning my Irish heritage and all that. Somehow, the menu description of “ground lamb, carrots, peas and crispy potato top” didn’t lead me to expect the plate I received. Is there cheese in the potatoes? Why are they orange? Why does it look like a stove burner was left on top of the “pie”? I expected the top to be browned like this, since the menu said “crispy” potato top, but this was like styrofoam.

Granted, this is my first time trying the meal, but – really – is it supposed to smell… and taste… like dog food? This looked like pureed gopher meat or something. With a can of peas thrown in before serving. And a stover burner on top. For garnish.

One bite. That’s all I could get down. It tasted like… hm. To be honest, I’m not really sure what it tasted like. Paste, maybe? Gamey paste? With peas.

Everyone else liked their dishes, I was the only unlucky one. I sent it back. Hoping for no spit in the replacement dish of… 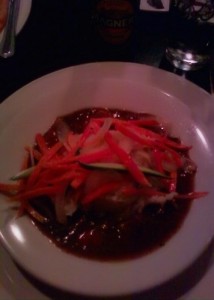 Guinness Stew. (Note the Magners bottle in the photo. Needed a second dose after the squirrel meat… I mean, the Shepard’s Pie).

The Guinness Stew was lovely, as always. Hearty, warming, filling. Everything it should be. Everything the monkey-meat pie wasn’t. 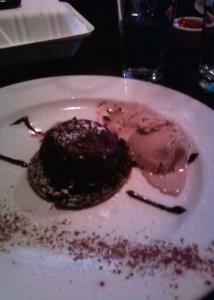 This one wasn’t mine, it belonged to the lovely lady to my left. Flourless chocolate cake. Also known as Molten. With coffee ice cream. Oh. My. Jiminy. I wanted to dive naked into a lake of this cake and slather myself with it! SO heavenly rich. She only let me have one bite, and somehow, that was almost enough. Almost.

Because I had mine: 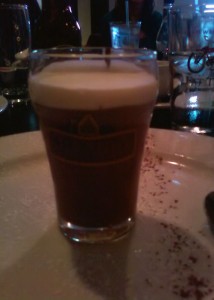 Guinness Chocolate Pudding, with Bailey’s crème anglaise. The photo does NOT do this dream dessert justice.

Underneath an inch of the frothy Bailey’s crème anglaise is the thick, luscious, truffle-textured Guinness Chocolate Pudding. There simply aren’t enough words for how much I love this dessert! It is just the right amount of sweet, and rich, and lingering on the tongue after each bite, just enough to make you want another bite. And another. And another. And…

then you hit the bottom of the glass. 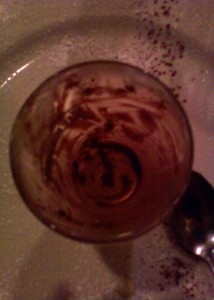 Maybe I should order two, next time. ;)