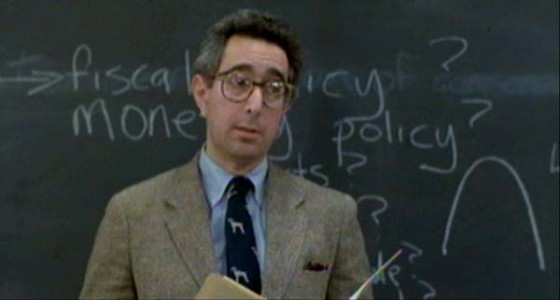 Ben Stein, the man who made himself famous to my generation as the teacher in Ferris Bueller’s Day Off who repeatedly asked for “Bueller?” during attendance, is now on my nerves.

Stein is an American success story, having been a speech writer for Nixon, an actor, writer, commentator on political and economic issues, and even an Emmy winner for his successful game show, Win Ben Stein’s Money. I’ve read his Yahoo! financial columns and pay close attention when he’s interviewed on television.

But then he and Shaquille O’Neal started answering the phone when I called Comcast technical support. And now he’s on a commercial for a free credit report website alongside animated squirrels, speaking in his standard monotone way that was once funny but is now awfully boring.

Stein, you’re a brilliant man and you don’t need the money. Please go back to being a pundit on Fox News and stay out of commercials! In the meantime, let’s watch the best – and worst – of Stein.