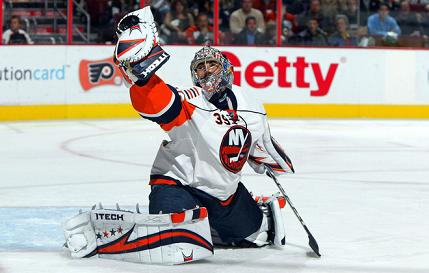 DiPietro is much better at taking pucks than punches.

Rick DiPietro has been a running joke amongst those familiar with the NHL after he signed a whopping 15-year, $67.5 million contract back in 2005 with the New York Islanders. He has struggled to remain healthy and has earned the majority of that paycheck without making many appearances on the ice.

Now we have another think to mock DiPietro about – he absolutely sucks at fighting.

Goalie fights are rare but few things in sports are as awesome as watching two guys wearing cumbersome padding try to knock the other out. Usually when they do occur it is amongst a massive scrap involving everyone on the ice.

This one was a bit different.

DiPietro collided with Pittsburgh’s Matt Cooke as time was expiring in the third, sending Cooke sprawling into the corner. Whether DiPietro initiated contact or whether Cooke was playing his usual role as nuisance is up for debate, but what resulted was several Islanders skating to greet Cooke in the corner.

From down the ice, Penguins’ goaltender Brent Johnson obviously saw things one way and wanted to have a few words with DiPietro.

This one ends rather quickly as DiPietro can’t handle his punches … or even one for that matter.

Not exactly your instant classic, but a goalie fight is awesome regardless of the outcome.

Since this latest goalie fight was so brief, we leave you with the memorable Chris Osgood and Patrick Roy scrap from several years ago.