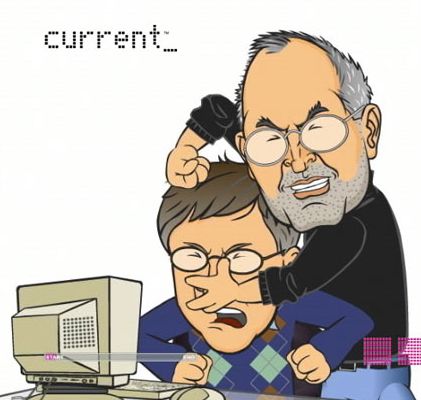 Hey, remember back in the ’80s and ’90s, when the big argument among nerds was whether Windows was better or Apple was better, with a few annoying nerds insisting on Linux? No? You didn’t care? Neither did anybody else. Apple became the artsy-fartsy OS and Windows became the OS everybody actually uses, even most Apple nerds. But things are…changing.

Quick, name who makes the biggest cell phone in the world. Right, Apple. Now, quick, what’s the company that gives you the search engine you use all the time, the maps you search to find directions, and a bunch of other services. Right, Google. Now, ask yourself what’s going to happen now that they want to kick the crap out of each other. That started recently with Apple dropping a hardcore lawsuit bomb on HTC, who makes Google’s iPhone knockoff. Unsurprisingly, this is actually a stealth attack at Google and a warning fired across the bow to anybody else thinking of making a Google phone. Like, say, Motorola. 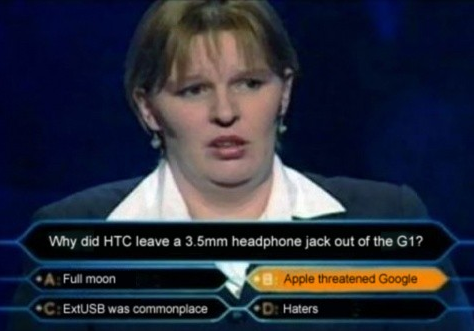 The basic problem is Google makes Android, which we’re sure you’ve heard about, if for no other reason than you can’t escape those stupid Droid ads. Android competes directly with the iPhone, which is, not to overstate or anything, what Apple’s entire future is resting on. And then Google turned around and crapped out an iClone. What’s that you say? That it sounds like AT&T, Verizon, and T-Mobile are going to be dragged into this pissing match? You’d be right. 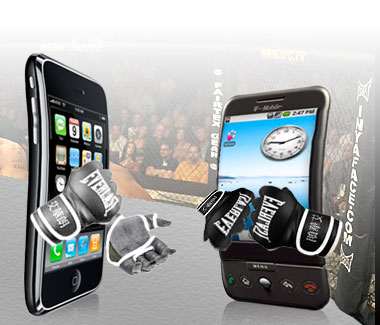 This is kind of important because what’s at stake here is pretty much the future of how you use computers, period. The day isn’t far off when everybody will have a smartphone and a netbook instead of a desktop computer. This is why Apple cranked out the iPad, to have something (relatively) cheaper than their laptops on the market. Google wants to be on both because they keep that $500 stock price by being goddamn everywhere and pushing insane amounts of advertising. Maps, mail, search, shopping, Google wants to be in your business and the being-in-your-business business makes a LOT of money. Apple, meanwhile, is Apple; it’s evil. Always has been, always will be. And the guy writing this is a proud Mac owner.

Who’s going to win? Good question. Probably neither. The net result of every software war is the decision is made not by two companies comparing their digital wangs but usually by outside forces. Windows settled the OS war by making it standard on every desktop, and did the same thing with the browser war. It was never even a fight. Similarly, Google is a web company, and Apple isn’t. Do you really give a crap if Apple wants you to use Bing instead of Google? Hell no. You’ll just go to Google. Similarly, do you really give a crap about the Nexus One? Of course not. No one does, except nerds, because they think it’ll lead to some open-source utopia. Yeah, we should really trust companies with triple-figure stock prices to give us that. That’ll end awesomely. 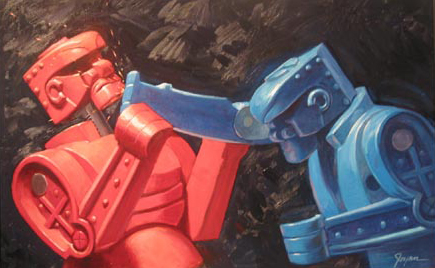 No, the reason we bring this all up is that there’s nothing like watching really rich and smart people bash their fists against each other’s chins like Rock-Em-Sock-Em Robots. So have some popcorn and enjoy; this’ll be a hilarious fight.