Sports > Other > Grand Prix of Baltimore is More Than Just Racing

Grand Prix of Baltimore is More Than Just Racing 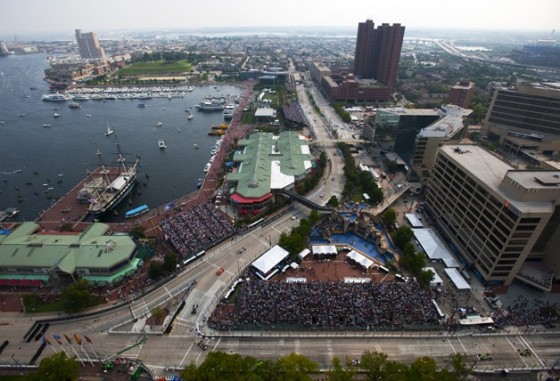 The Grand Prix of Baltimore returned for its third year this weekend, and since it’s right in our backyard, we spent the day there on Saturday. While the event has been the target of much criticism, you can see in that photo above (from a previous year) what a great advertisement for the city that a Grand Prix can be. Aerial shots of the city and the track on national television during the Izod IndyCar race show that Baltimore has much more to offer than what you saw on The Wire.

So even though the drivers find the track bumpy, the residents find the traffic frustrating, and the promoters have yet to turn a profit, there is still lots to love about racing downtown in Baltimore. There were plenty of writers and photographers on hand to bring you amazing images of cars grabbing air on the chicane, or breaking down the rivalries in the chase for the points. We’re instead going to focus on everything else that goes on during race weekend in Baltimore that makes it a great event, even for folks who aren’t particularly fans of racing.

Scenes of the City 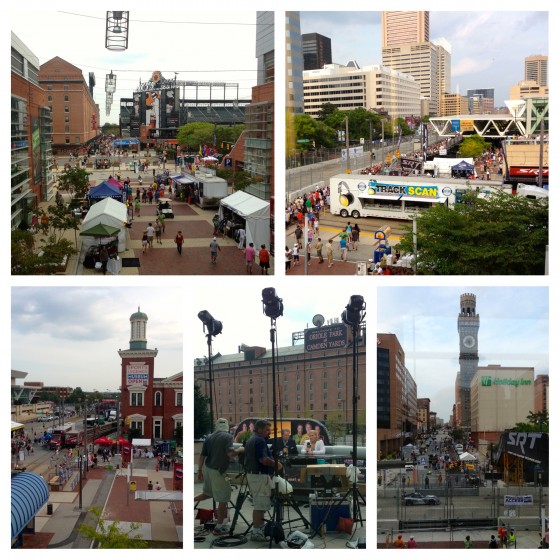 As locals, we’re well aware of the Baltimore Landmarks, and this major event is perfectly situated to take advantage of the vistas that Baltimore can provide. While we didn’t walk down that far, the track extends from the Inner Harbor up to Camden Yards (where we spent most of our day). The Inner Harbor includes the National Aquarium, Maryland Science Center, World Trade Center, Power Plant, Harborplace, and much more. Those major landmarks appeared in photographs and television shots all weekend. The track then made its way up the hill to Oriole Park at Camden Yards, adjacent to M&T Bank Stadium and wrapped around the Baltimore Convention Center with the Bromo Seltzer Tower in the background.

There is far more that Baltimore has to offer, but we’re not tour guides, so we’ll stop there. However this event provides a unique opportunity for the city to showcase itself, and welcome people from all over the country to experience. For those who know and love the city, the event provides a sense of pride, as we share those scenes with a wider audience. 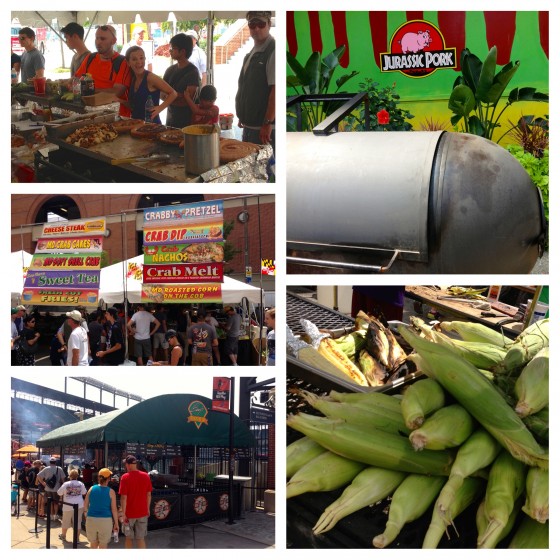 Between food vendors inside the fence, to restaurants just outside its perimeter, there were literally hundreds of choices for race goers to get their grub on. Our personal favorite is Boog’s BBQ on Eutaw St. at Camden Yards, which was open for the race even though the Orioles weren’t in town. However there was also the popular Taste of Maryland tent, offering up crab dishes, beach fries, and locally grown corn. Many bars and restaurants both inside the track and out had views of the action, offering up some unique options for sit down dining. Notably, Dempsey’s Brew Pub & Restaurant at Camden Yards had seats along the window which had direct views of Pit Lane. 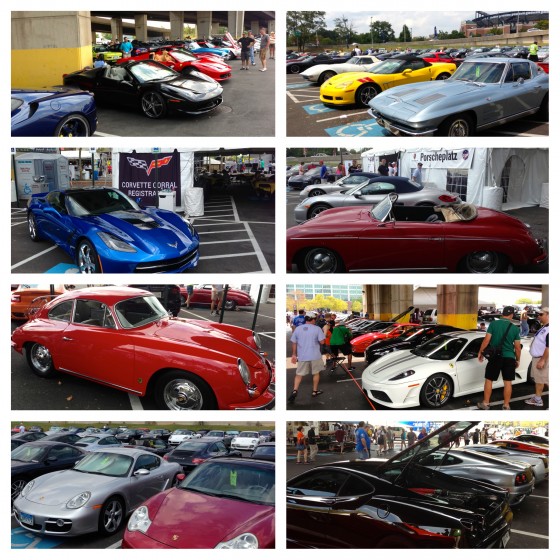 We were delighted to find an amazing car show taking place in the parking lot between the two stadiums. While the selection of cars seemed limited to the brands that race in the American Le Mans Series, there were plenty of Ferraris, Porsches, Corvettes, and BMWs for car enthusiasts to check out. Car Clubs for each took advantage of the opportunity to show off their vehicles, and it was a popular sideshow to the main event. With a bit of research, we discovered that this is known as the ALMS Car Corral. 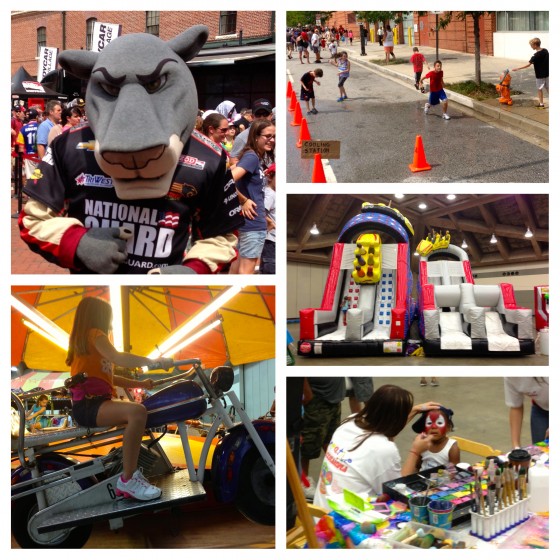 Children 12 and under received free general admission with a paying adult, and there was plenty for them to do. In particular the Esskay Family Fun Zone in the Convention Center was a welcome air-conditioned oasis. The area was large and offered a variety of free activities for kids, including face painting, inflatables, rides, and even slot car racing. For those craving a bit of their own speed, they could jump in an electric Go-Kart for $15 per person. Obviously lines got longer over the 3-day event as crowds peaked on Sunday, but there were enough activities to keep all of the kids occupied. 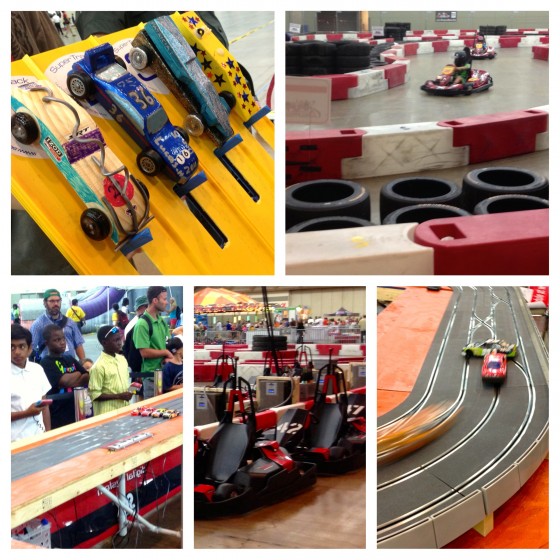 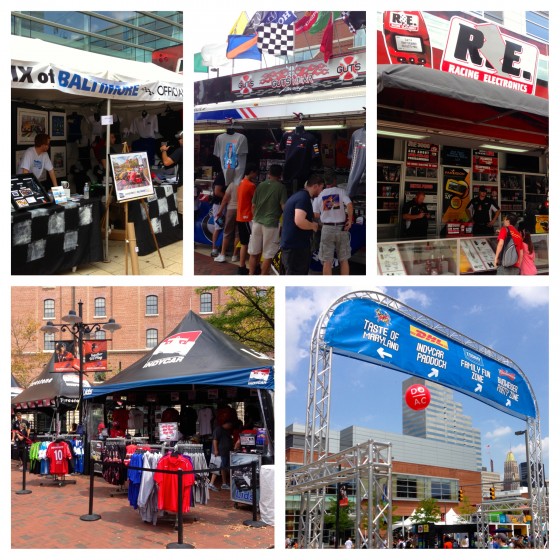 It’s pretty well-known that racing (among many things in life) is funded by advertising. So a weekend at the track is full of brand activations, sponsorships, and merchandise for sale. Some may see this as a negative, but there is a reason why companies continue to sponsor sports events and teams… the fans actually like it. So there was no shortage of opportunities for racing fans to have a personal experience with SRT, The National Guard, Verizon, or 5-Hour Energy. Local companies embraced the opportunity to hang out with the fans too, including Mr. Tire who invited the famous Lambo Batman and his new Batmobile to the track. These brand and merchandise tents also served as the location for autograph sessions for fans, who waited in lines to meet their favorite drivers. 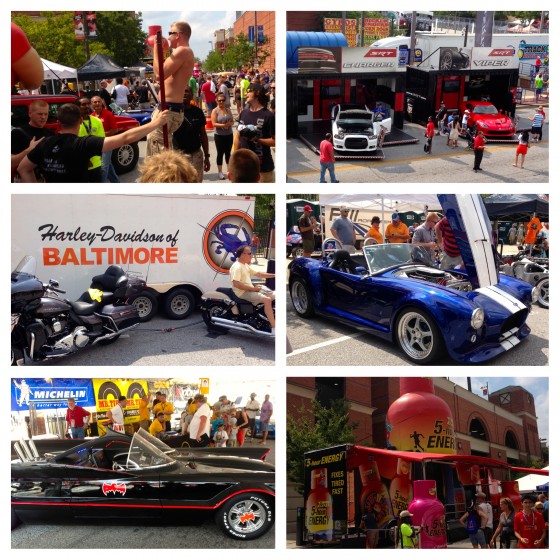 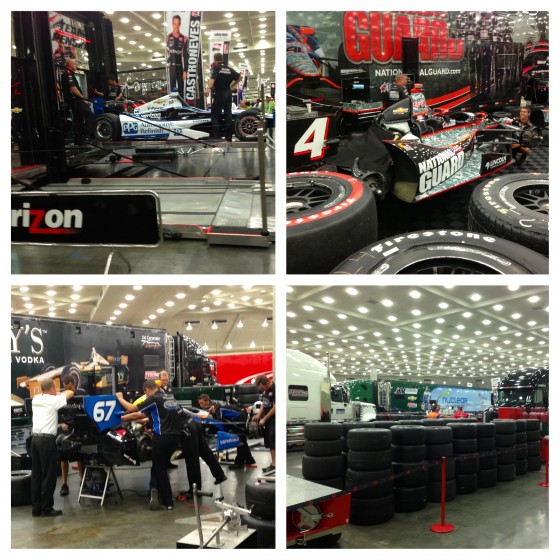 The Paddock is essentially the garage at a race track, it’s where the cars are prepared for the race. The Izod Indycar Paddock was located in the newer section of the Baltimore Convention Center. Although it required a fee to enter, fans were offered a great opportunity to see behind the scenes as crews worked on the cars. Each team has their own area to park their haulers and space for their crews to get the job done.

The American Le Mans Series Paddock was located outside of Raven’s Stadium, and was free to all fans. While it was noticeably warmer outside, this free attraction was popular among fans and allowed you to get a close and personal look at some amazing cars. 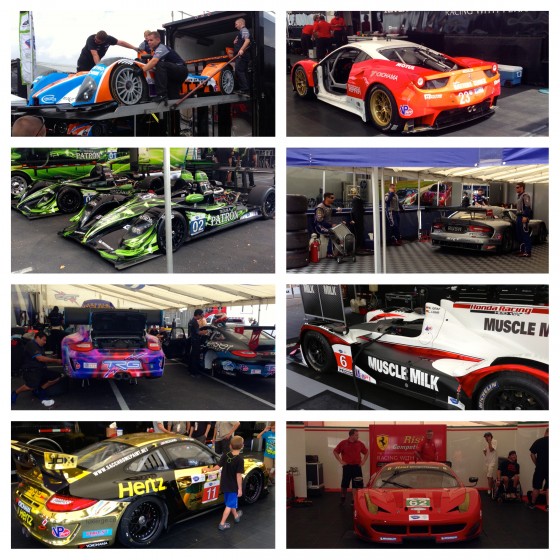 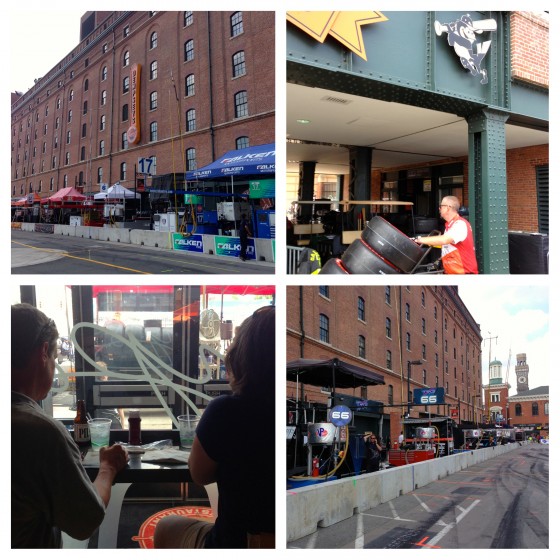 Access to the Pits is rather exclusive, so we’re not going to pretend that your typical race fan has that opportunity. However since we did with our credentials, we thought we would share some photos. First, the location is absolutely killer, on the backside of the famous Camden Yards warehouse. Though the pit boxes are a bit tight for teams to work in, that scenic location is just too cool not to use. With several different racing series competing, the pits are a very active place as teams swap their equipment in and out between races. As we mentioned above, Dempsey’s provides a very unique view of the track as you can actually watch the Pits through the window while eating lunch. 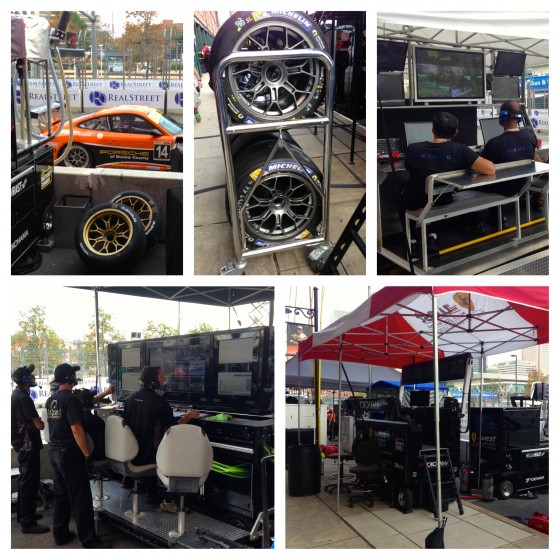 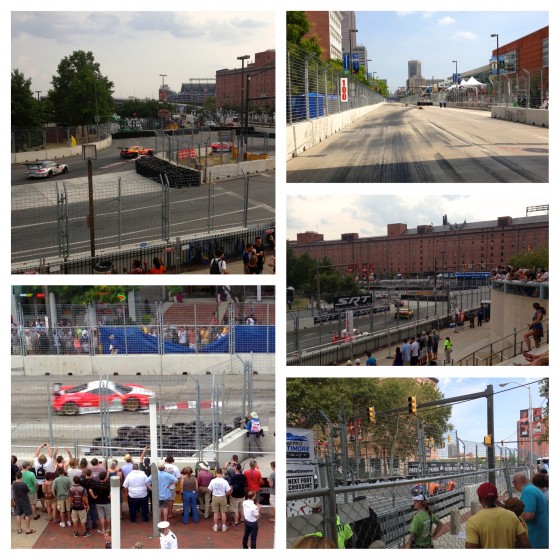 There was actual racing going on at the Grand Prix of Baltimore too, and we didn’t miss that while we were taking in all of the other scenes. One very important thing that folks may not realize, is that there are four different groups competing over the 3-day event. When you combine that with practice and qualifying, there are cars on the track constantly from Friday morning until Sunday afternoon. So while the Izod IndyCar race on Sunday afternoon is the premier event, if you’ve never been to a race before and don’t know Will Power from Patrick Dempsey, there is plenty of fun to be had even on Friday.

We actually specifically chose to attend on Saturday, in order to watch the American Le Mans Series (ALMS) race. There are multiple classes to ALMS, but the GT class is our favorite, because it features cars that you could actually go buy. Obviously they’ve been racing tuned, but the GT class features Ferrari F458 Italia, SRT Viper, BMW M3, Corvette C6.R, and Porsche 911 GT3.

The track in Baltimore definitely needs some work, as some of the turns were causing issues, and it’s noticeably bumpy. While fans enjoy some rough racing and cars hitting each other, they don’t particularly like extended delays while things get cleaned up. We watched the race from several locations, and although we’re certainly not experts, we enjoyed the action that we saw. The drivers may curse this circuit, but it’s a hell of a lot more exciting than watching cars turn left for three hours. 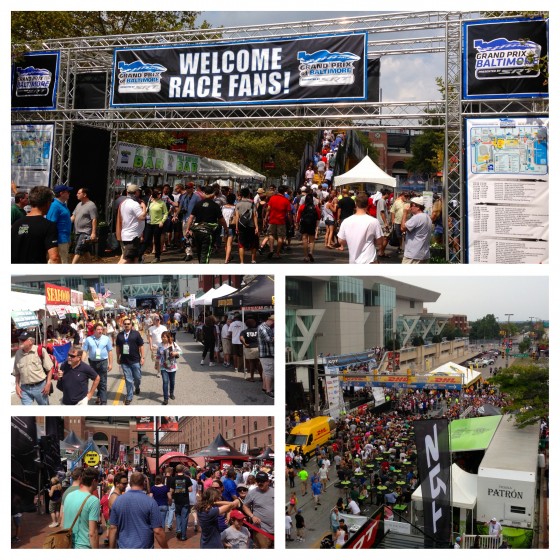 Attendance at the 3-day Grand Prix of Baltimore hasn’t been what organizers would like over its history, but it can take a while for new events to take hold sometimes. Much of the local press about the race has revolved around traffic and inconveniences for residents. While there is certainly truth to that, utilizing alternate routes, we were largely able to avoid backups.

We don’t yet have attendance numbers, but from what we saw the race appeared to be well attended and people were enjoying themselves. Reduced prices for students and admitting kids for free with a paying adult were both good moves to increase General Admissions. It seems like selling the more expensive tickets in the grand stands at the race is where the shortfall is likely coming from.

It takes thousands of people to put on a world-class event like this, and by all accounts the new management of this race has done a great job of getting things organized. We saw an army of volunteers and paid staff working this race from all angles. Our hope is that they’ll be able to increase sponsorship and attendance for next year to keep this event in Baltimore.