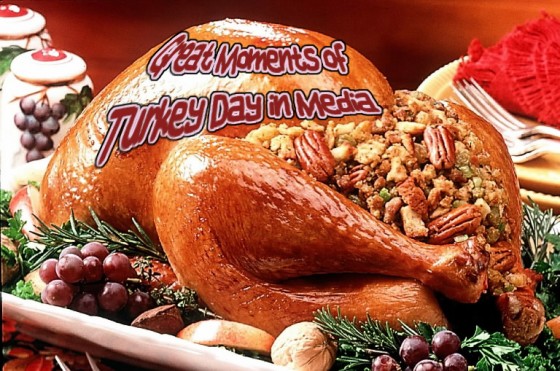 Oddly, for being one of the most instantly recognizable holidays in America, there have been very few movies made on the subject of Thanksgiving. Sure, a couple stand out, which we’ll get to post-haste, but not nearly as many as Christmas or, especially, Halloween.

Conversely, when it comes to TV, just about every year has a few really stand-out specials from the best shows. We’ll go over those, too. But what about music? Unless you count those songs from elementary school they used to play while you cut out paper hand turkeys, then there really isn’t a large quantity of those either. You’d think Thanksgiving would be ripe for a mass influx of celebratory what-not, alas, not so much. Well, rather than dwell on what isn’t there, let’s take a peek at what is.

Let’s begin with perhaps the least known choice, but quite possibly the best one considering it’s a movie trailer for a film that, thus far, doesn’t even exist. It’s by Eli Roth (he of Hostel fame and his appearance as the Bear Jew in Inglourious Basterds) and it ran as one of the fake bumpers during the movie Grindhouse in its uncut version. You see, Grindhouse was supposed to run as two separate movies under one double-feature heading. In some theaters, it didn’t. Anyway, this collection of fake trailers is also where we eventually got Machete. So, without further ado… Thanksgiving. (NSFW)

Then of course there is the Turkey Carving scene from Little Fockers, which is part of the trailer below :

…and this classic scene from Addams Family Values:

How about some films that are considered “Thanksgiving Movies?” Sadly, there aren’t a whole lot. There are some that, unless you’ve seen them, may not be remembered as Thanksgiving such as Pieces of April and Alice’s Restaurant and, apparently, Scent of a Woman. But, it’s the classic John Hughes masterpiece, Planes, Trains and Automobiles that is all about getting home for the holiday.

When it comes to TV, you can pretty much take your pick from classic Thanksgiving episodes since just about every show has had at least one. Toss in the famous Peanuts Thanksgiving and even the classic Garfield cartoon, and, well, just watch…

…and to bookend this collection with another NSFW take on Thanksgiving, we leave you with Dexter :

And there ya have it. Happy Thanksgiving, ya nuts.