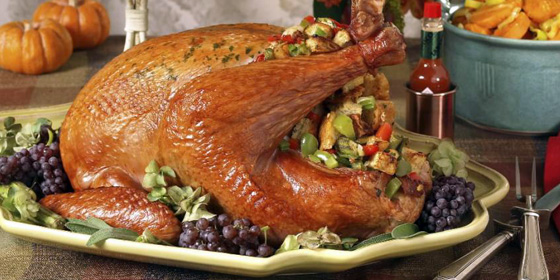 The first thing one thinks of when one thinks of Thanksgiving, is family murder. No, that’s not right. When you think of Thanksgiving, you think of turkey, of course! That time-honored tradition of serving a gigantic, over-stuffed, half-cooked bird to your dinner guests has arguably been around since the time of the original Pilgrims- but it probably hasn’t. Anyway, it’s here now and what self-respecting human would go through the holiday without either eating one or, at the very least (I’m looking at you, wacky vegans) being in the same room as one. But the turkey itself has been around in many different forms besides the golden-browned beast on your dinner table. Let’s take a look at turkeys in pop culture, shall we? 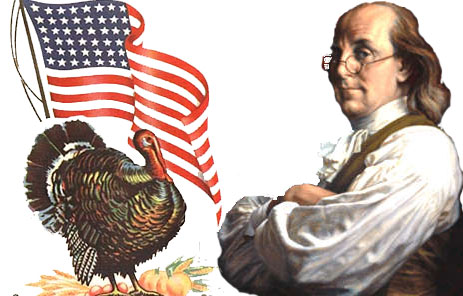 Raise your hand if you remember Ben Franklin. Okay, got about 80 percent of you there. Does anyone remember what Franklin did during his assist of creating a free country and a relatively mistake-free constitution? No, he wasn’t President. Yes, he had a hand (ha!) in inventing electricity.

Okay, here’s a list of all of this chap’s accomplishments, (ahem) “was one of the Founding Fathers of the United States. A noted polymath, Franklin was a leading author and printer, satirist, political theorist, politician, postmaster, scientist, inventor, civic activist, statesman, and diplomat. As a scientist, he was a major figure in the American Enlightenment and the history of physics. He invented the lightning rod, bifocals, the Franklin stove, a carriage odometer, and the glass ‘armonica’. He formed both the first public lending library in America and the first fire department in Pennsylvania.”

Oh, and he loved turkeys. Yeah, as it turns out that’s kind of a myth, too. You see, after the Great Seal was designed in 1782 by Charles Thompson and immediately adopted by Congress, Franklin made mention that the poorly rendered fowl looked surprisingly like turkey, and, being Ben Franklin and all, joked incessantly about it. He was a laugh a minute. 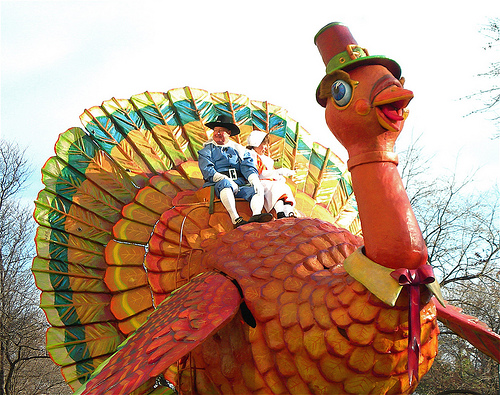 Starting like clockwork at 9:00 am sharp, EST, on just about every Thanksgiving since 1924 is everyone’s favorite vapidly narrated convoy of giant balloons and paper-coated floats, the Macy’s Thanksgiving Day Parade. This is certainly the unofficial start to the real Holiday season since it features, among lots of other shit, Santa Claus! Yeah, still rings with memories for me. But, since it is, technically, the Thanksgiving parade, it also features the likeness of a massive dirigible shaped like dinner: Tom Turkey. Tom has become a staple of the parade since 1971, only fifty years after the parade’s inception. Took ’em long enough.

8) Why would a turkey be in the straw? 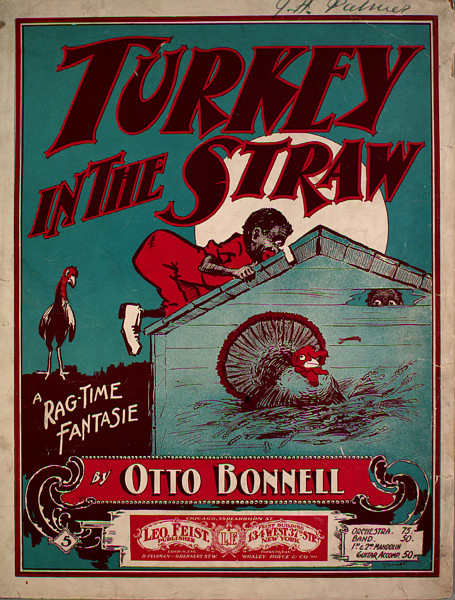 You’ve likely heard this ditty a time or two, maybe while watching old 30’s films featuring plantations and stuff. Also featuring slaves since this song is originally titled (and I wish I were making this up), “Zip Coon”. My goodness, if that’s not the most racist song name of all time… Anyway, it was first written down in the early 19th century after becoming popularized by Black-Face performers in the late 1800’s. No surprise there. At this point it is considered an American Folk Song, and here are the original lyrics lest you want to croon this jig at your holiday feast: 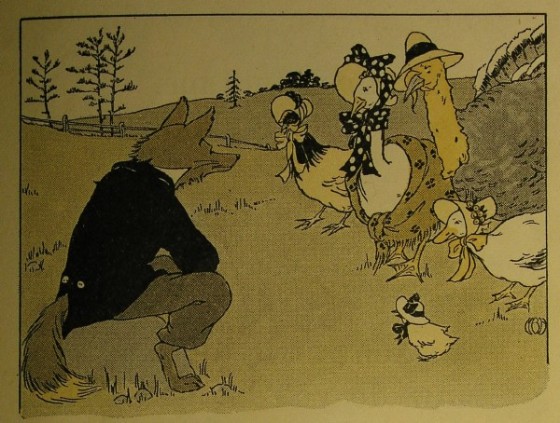 Ya know that old saying, “looks like the sky is falling”? Yeah, I’ll bet you’ve heard it a time or two. Well, it comes from a very popular children’s story called either ‘Chicken Little’, or ‘The Tale of Chicken Little’ and all variations there of. Basically, in the fable, “a chick, that believes the sky is falling when an acorn falls on her head, decides to tell the King and on her journey meets other animals who join her in the quest. After this point, there are many endings. In the most familiar, a fox invites them to his lair and there eats them all. Alternatively, the last one, usually Cocky Lockey, survives long enough to warn the chick and she escapes. In still others all are rescued and finally speak to the King.” Every animal Chicken Little meets has a rhyming moniker, hence Goosey Loosey, Henny Penny, and the aforementioned Turkey Lurkey.

6) Life in a Turkish Prison 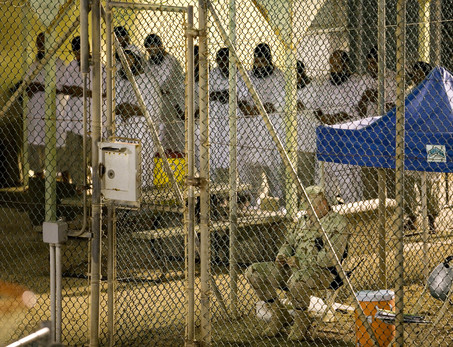 Turkey, besides being a delicious meal, also happens to be a country. It also, apparently, has a lot of hashish. Now there is a movie out there that portrays (slightly loosely) life inside one of these prisons, and it is called Midnight Express, and you must go see it. On October 6, 1970, after a stay in Istanbul, Billy Hayes is arrested by Turkish police on suspicion of attempt to smuggle hashish, which was found in bricks taped to his body. He is sent to Sağmalcılar prison for 30 years. His stay becomes a living hell: terrifying and unbearable scenes of physical and mental torture follow one another; where bribery, violence and insanity rule the prison. Let’s all go to Turkey!

Jerky Turkey is an animated theatrical short, directed by Tex Avery, released on 7 April 1945 by MGM. Summary via IMDB :

The Pilgrims land at Plymouth Rock and found a colony. A very large number of Pilgrims can be seen standing in line… for their cigarette rations. A Pilgrim goes hunting for Thanksgiving dinner. He meets a black market turkey, one who sounds like Jimmy Durante. The turkey sells himself to the Pilgrim, but a chase ensues… The turkey can deflect machine gun bullets… when dressed as Superman. The two declare a truce and decide to eat together at Joe’s Diner.

The patriarch of a family of farming hill billies is fattening a turkey to slaughter for Thanksgiving Day dinner, and he is fattening the fowl by providing him with a veritable feast of roast beef, ham, fruits, vegetables, cakes, and pies. A jealous Daffy Duck, one of the turkey’s fellow farm animals, wants to have all the food for himself. So, Daffy pretends to care for the turkey’s welfare and warns the turkey off the food, and he urges the turkey to lose weight so that the hill billies won’t want to slaughter him. Daffy gorges himself on the food while acting as coach to the turkey, who is frantically and strenuously trying to reduce himself. When Thanksgiving comes, the turkey is toothpick-thin, and the hillbilly father turns his hungry sights on an overweight Daffy!

It’s Thanksgiving, and Tom Turk is trying to avoid become the main attraction on Porky Pig’s dinner table. Fellow bird Daffy Duck is willing to help him, until he realizes that he’ll miss out on a delicious meal. Hilarity ensues as each tries to get the other caught by Porky. 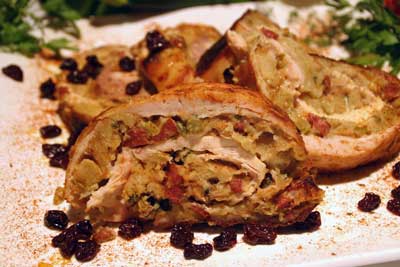 Let’s say, just for a minute, that you wanted to serve as many types of fowl as you conceivably could for Thanksgiving without using more than one cooking vessel. What are your options? Well, lucky for you, the answer is pretty damn simple. You’re likely already going to stuff your bird anyway, with breadcrumbs and whatnot, why not cram it full of other birds as well? A turkey has a giant gut with nothing but free space, I say take a duck and a chicken, de-bone those bastards, shove the clucker in the ducker, and wedge it in the big ass fucker: Turducken! This popular dish has been around since the 1800’s in one form or another often employing such delicious options as bustard, pheasant, guinea fowl, woodcock, teal, partridge, plover, and quail. Basically, if you can make it fit in another bird, knock yourself out. Yum. 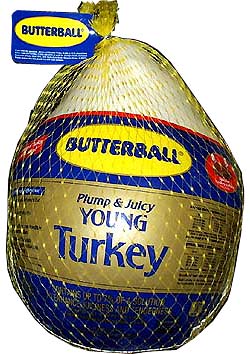 What mention of turkeys would be at all complete without thinking about the Butterball-brand turkey! Butterball has been nationally recognized since 1940 and has become the single largest producer of turkeys in the U.S. forking out over a billion (with a B) pounds of bird each year. The mother company, Carolina Turkeys has made the Carolinas the largest producing turkey state in America as well. Though typically hard to mess up completely, Butterball has offered a toll free phone number active since 1981 to assist in all your turkey related questions, queries, and issues called the Turkey Hot Line- it’s on the packages. Yum, Butterball.