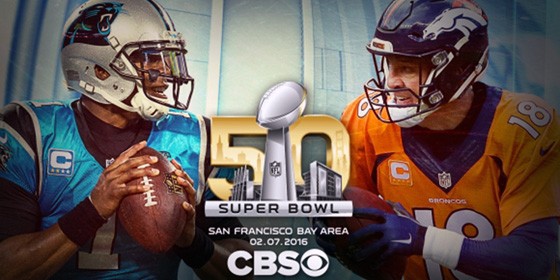 Super Bowl 50. For the first time since the early days of the Super Bowl, the NFL has decided to axe the idea of using Roman numerals simply because 50 is more marketable than L. The Carolina Panthers couldn’t care less what they call this Super Bowl, they just want to win.

Cam Newton had one incredible season in 2015 capped off with a beat-down of the Arizona Cardinals in the NFC Championship game in which he threw for 335 yards, ran for 47 more yards, and scored 4 total TDs. If there was a question as to whether or not he is the NFL’s MVP, that stat line should secure him the award.

On the other end of the line stands the league’s toughest defense and the only team that can stop Cam Newton, the Denver Broncos. They head into the Super Bowl ready to redeem themselves from their own beat-down, suffered in 2014. As we prepare for the greatest game of the season, we wanted to take a look back at some of the best plays in recent Super Bowl history (mostly because video is lacking for earlier big plays). Enjoy.

Following the biggest build-up to a Super Bowl in history, the very first play on offense foreshadowed exactly how the game was going to go. Peyton Manning lined up in shotgun formation only to have the snap sent over his head and out of the back of the endzone. It was all downhill for the Broncos, the NFL’s top rated offense that season, and the Seahawks easily went on to win.

At 37 years old, John Elway was tired of losing Super Bowls. Super Bowl XXXII was his fourth appearance and during the 3rd quarter of a 17-17 tie, he decided to make a run for the end zone and instead of diving out of bounds, he lowered his shoulder and made the leap. The helicopter spin turned it into an iconic run that helped push the Broncos to their first Super Bowl win under Elway.

Trailing 10-7, the Arizona Cardinals just picked off a Ben Roethlisberger pass and were sitting pretty with a 1st and Goal from the Steelers one yard line. However, as Kurt Warner dropped back to pass, James Harrison jumped the route and took the interception 100 yards for a TD. He used every ounce of energy he had left to reach the end zone. He nearly passed out but he was not going to surrender. That play reenergized his entire defense and they came out on fire in the second half.

With 6 seconds left in the game and the Bills trailing the Giants 20-19, Scott Norwood had a chance to become a Buffalo Bills legend by kicking a game-winning 47 yard field goal. But he missed, wide right. It was the last time the Bills would come even remotely close to a Super Bowl championship as they made the next three consecutive games, getting blown away each time.

Prior to Malcolm Butler’s game-winning interception, the Seattle Seahawks were still trying to get close enough to get into the endzone before time expired. Jermaine Kearse did his best by making an extraordinary catch from his back while he laid down on the field. The 33 yard catch was just enough to help them get closer but it lead to a final play that you will hear about shortly.

If you appreciate a good story, then the New Orleans Saints winning Super Bowl 44 should be one of your favorites. When Tracy Porter stepping in front of Peyton Manning’s pass, he took it all the way for a score that would lock up the victory for the Saints.

The final four minutes of Super Bowl XLIII was the most exciting in recent Super Bowl memory. The score was 20-14 before the Cardinals got a safety on an Offensive Holding call in the end zone making it now 20-16. On the following drive, it took only one 64 yard TD pass from Kurt Warner to Larry Fitzgerald for them to take the lead 23-20. But then Santonio Holmes made one of the best tip-toe TD catches you will ever witness in a Super Bowl to seal the win for the Steelers with only 0:35 seconds left.

Joe Buck had a chance to earn the respect of every single NFL fan in the World but since he is nothing more than an emotionless robot, he didn’t give this play the call it deserved. On 3rd and 5 with only 1:15 minutes remaining, the Giants trailed the Patriots 14-10. After nearly going down several times, Eli Manning found a way to escape the pass rush and toss a prayer to teammate David Tyree who then caught the ball on the tip of his helmet within inches of the grass for a 1st down. The catch alone is one of the best in NFL history, the fact that it lead to a game-winning TD just seconds later, makes it even greater.

Imagine you are Kevin Dyson and you just got tackled one yard short of the endzone as time expired in the Super Bowl. There is simply no coming back from that. Mike Jones turned an almost sure bet for a TD into the greatest tackle in Super Bowl history.

After winning the Super Bowl in 2014, the Seahawks turned right around and stormed back for another shot at a ring. Everything was pointing to Marshawn Lynch pounding the ball right up the gut to win the game but Pete Carroll got too cute, called for a pass, and Malcolm Butler risked it all for a shot at game saving interception. It worked out for him.

The final drive of Super Bowl XXIII is the single greatest comeback in NFL history. Joe Montana took his 49ers 92 yards down the field on 11 plays. He passed 8-of-9 for 97 yards and a touchdown. That last pass was a bullet that zipped past four Bengals defenders before finding the chest of John Taylor who celebrated like a child on Christmas morning.

When the New Orleans Saints attempted an onside kick to begin the second half of the game, they were trailing 10-6 and their offense just wasn’t doing much of anything. It changed the entire outcome of the game. The Saints outscored the Colts 25-10 in the second half to win the first Super Bowl in their history. It was one of the riskiest calls in Super Bowl history and also the single greatest play call of all time.