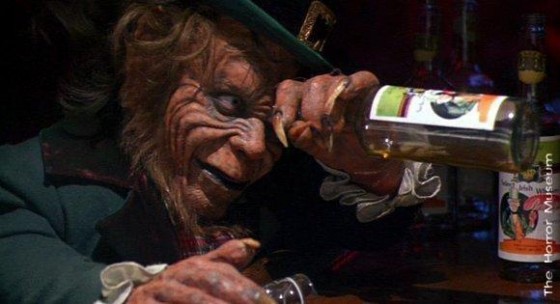 When it comes to St. Patrick’s Day movies, well, there aren’t a whole lot to choose from. Oh sure, there are plenty that are Irish-themed like The Departed and The Boondock Saints kicking around, but not many that pay homage to the Saint himself. This includes the dreadful, yet fantastic Leprechaun horror franchise, which has kinda sorta done more harm than good to the Irish, what with the titular character being a thieving, boozing, homicidal maniac. Although, the Irish are probably too drunk to care, so let’s move on.

While watching the “greatest quotes” from Leprechaun 2 (my favorite in the series) montage, my pop culture cluttered brain began firing its synapses. Having not seen the movie in several years, I had forgotten how many pseudo famous faces were in the cast.

The bearded guy at the !:15 is the late Sandy Baron, who you might remember better as Jack Klompus on Seinfeld.

Tony Cox, the handsome little leprechaun at 1:40, needs no introduction.

Have yourself a safe and jail-free St. Patrick’s Day.