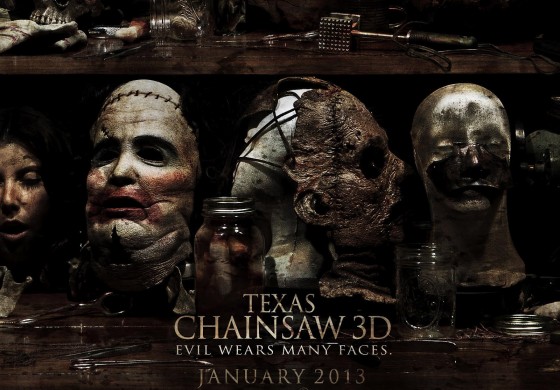 So I decided to give Texas Chainsaw 3D a go. What can I say, I’m a glutton for bad horror. In fact, I’ll watch just about anything be it a remake, a re-imagining, or (in this case) a follow-up. I don’t have too high of standards when I hear a director say something like, “I have made a loving tribute to the original with my rendition of a continuation” because I know that loving tribute typically translates to worthless shit. Having said that, I went ahead and watched this movie anyway.

I knew going in who was starring, and I knew that I was a big fan of Alexandra Daddario. Why? Well, for starters, she’s absolutely stunning. I really haven’t seen her in much aside from the so-so Bereavement, in which she runs around in a suspiciously tight tank top with a ton of visible nipple pokies and cleavage you could literally nestle in. Aside from that, the movie is super derivative and painfully slow. Anyway, my immediate knowledge of her is pretty limited to pictures and… more pictures. But I digress.

Texas Chainsaw 3D has very limited redeeming value. The beginning was probably the most “loving tribute” to Tobe Hooper’s classic for the simple fact that it takes place immediately after the events of the original. It feels pretty gritty, sticks to the frenzied pace, and offers up a pretty interesting twist. Sadly, the acting was shit and it only got worse from there. Ah, but who cares about acting when Ms. Daddario has one really memorable scene…

Is it topless? Close, but no. In fact it might be as close as we’re likely to get for a bit unless the rumors of her signing on for the film version of 50 Shades of Gray are to be believed. But it’s sexy considering the scene it’s in. Deep into the movie (which by the way was about as worthless a 3D experience as I’ve ever seen) after we discover the main point, [**SPOILERS**] her character Heather is a descendant of the Sawyer family and has inherited a big mansion in Texas from her recently deceased Grandma. Well, the cops don’t take too kindly to her digging up the past and one of them lashes her to a pole in the old Sawyer family meat processing plant. And what follows is… well, look for yourself and form your own opinion:

Okay, I’ll grant you the scene looks bad in and of itself, but trust me, it isn’t and no one gets… uh… abused. Just ignore the tape and ropes and enjoy, because damn, am I right?! Daddario is a welcome addition to the sorority of Texas Chainsaw Massacre Babes.