Sports > The Greatest Sports Moments of 2013

The Greatest Sports Moments of 2013 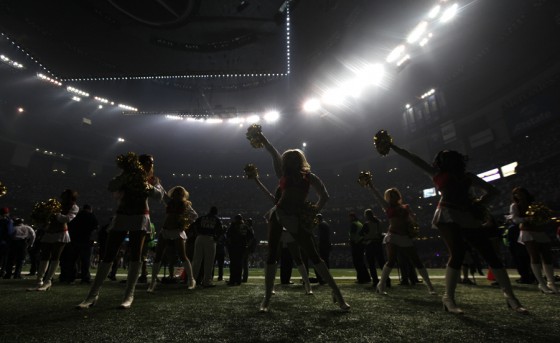 Now that all the turkey has been eaten and the presents have been unwrapped, it is time to take a look back over the year and relive some of the sports moments that captured our hearts and minds over the past year.

From the epic finishes to the amazing seasons, 2013 ended up being a great year for sports from all across the globe. So here is a list of the greatest sports moments of 2013 arranged chronologically. Enjoy.

Katherine Webb is gorgeous, duh. But when Brent Musburger points it out, we all felt a little dirty that night.

What is the point of playing Safety if you don’t play safely between the receiver and the goal line?

The Baltimore Ravens black out the San Francisco 49ers and Ray Lewis ends his career with his second Super Bowl ring.

No one knows if he killed his girlfriend or not but once the trial begins, we might end up finding out the truth.

The Netherlands shock the world and beat Cuba, twice.

March 10th – Brandon Knight Gets Destroyed on The Court

DeAndre Jordan reminded us all that he can dunk a basketball that night.

US Women’s team bring home their 9th Algarve Cup since 2000.

After knocking out the second seeded Georgetown to begin their Sweet 16 run in the NCAA tourney, the Eagles then upset seventh seeded San Diego State. And they did it with style. #DunkCity

It was fun to watch but that was about it. Soccer should never be played in snow like that.

8 year old Jack Hoffman was diagnosed with brain cancer in 2011 and always wanted to play for his favorite team, Nebraska.

April 12th – Kobe Goes Down for the Count

Kobe Bryant isn’t use to getting injured but he tore his achilles tendon that night and the NBA lost its’ freaking mind about it.

It didn’t take more than two holes in overtime at the Masters for Adam Scott to claim his first PGA Major win.

David Ortiz stood in front of the thousands of fans at Fenway Park following the bombings at the Boston Marathon.

The game between the Oakland Athletics and the LA Angels went 19 innings but took almost seven hours to finish. It finally ended around 4am/Central.

May 4th – The longest of Odds Almost Wins Kentucky Derby

Golden Soul started the race with 50-1 odds to win. He finished in second place.

May 18th – Longshot at Preakness Stakes Wins, This Time

We almost watched an upset at the Kentucky Derby just over a week before Oxbow, a 15-1 underdog, came through and pulled off the upset.

Toronto Blue Jays beat the Texas Rangers in 18 innings while the Miami Marlins beat the New York Mets in 20 innings. All on the same day.

With six seconds left in Game 6 of the NBA Finals, Heat trailing the Spurs 3-2, Ray Allen sinks the biggest shot of his career.

With just about one minute to go, and trailing 2-1, the Chicago Blackhawks scored two goals in 17 seconds to win the Stanley Cup.

Dwight Howard didn’t work in LA. So he decided it was time to head to Texas for another chance at being the best center in the NBA.

Andy Murray finally won at Wimbledon becoming the first person from the UK to win since Fred Murray back in 1936.

Aaron Hernandez just couldn’t quit being a thug and it could end up costing him his life in prison.

He is now facing up to a two year ban from the sport.

Never give up. Never fail to reach for the stars. Diana Nyad reached for them all and became the first person to swim from Cuba to Miami without a protective shark cage.

Peyton Manning started the 2013 NFL season off with a slew of TD’s when he tossed 7 to defeat the Ravens 49-27.

The Who Dat chant has never sounded better.

It isn’t that she was playing against sub par opponents, she is just that good.

September 12th – But What Did the Fox Say?

A curious little fox felt like wandering onto the football field during the TCU/Texas Tech game.

In his final home game of his career, Todd Helton crushed a Home Run.

Then gets relieved from the mound by two fellow Yankee greats Andy Pettite and Derek Jeter.

Just watch the video and enjoy.

After being sent packing from the Indianapolis Colts, Peyton Manning made his return to Indy and was greeted with a standing ovation from the entire Colts crowd. #Respect

After trailing the Cardinals 2-1, the Red Sox won the next three games to clinch their 8th World Series title.

What is going on in South Beach? Are the Dolphins losing control of their team?

In only 3 quarters of play against the Oakland Raiders, Nick Foles tosses 7 touchdown passes to become the second player this season to do so. He also threw for 406 yards and completed 78.6% of his passes.

After winning his 6th Nascar Sprint Cup, Jimmie Johnson moves within one win of Dale Earnhardt Sr. and Richard Petty.

If Derrick Rose doesn’t have the worst luck in the NBA, we think you might agree after he went out for the season with yet another knee injury.

That is a catch that only one person will ever make, ever.

In one of the greatest finishes in sports history, Aurburn’s Chris Davis returned a missed field goal 109 yards to defeat the number one team in the country, Alabama.

When the 2014 World Cup groups were announced, USA ended up stuck in one of the toughest groups in the tournament along side Portugal, Germany, and Ghana. But no one said it would be easy, right?

Things change, people grow, and time always moves forward. Mack Brown leaving the University of Texas was the smartest decision he has made in years.

After just a few weeks, Kobe Bryant comes down with yet another knee injury. This time, he is only going to miss six weeks instead of six months.