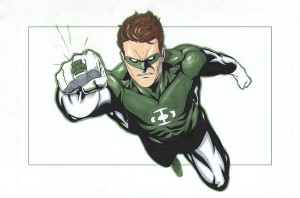 Film Drunk has alerted us to the news that Warner Brothers has given the green light (no pun intended) for a Green Lantern movie, something that’s been in the rumor mill for some time. The movie’s director will be Martin Campbell, who has two awesome Bonds films to his résumé (Goldeneye and Casino Royale), but not a whole lot of memorable movies beyond that (the best of the rest is probably the Antonio Banderas summer hit, The Mask of Zorro). With a reported $150 million budget, this one is going being developed as a major tent pole production, with a very preliminary release date set for December 2010. Given the subject matter, a Summer 2011 release is more probable. No one’s been cast as the titular role, but pre-production will start in mid-July with a targeted November shoot in Australia. For those interested, it is reported that the story will have a Hal Jordan focus.