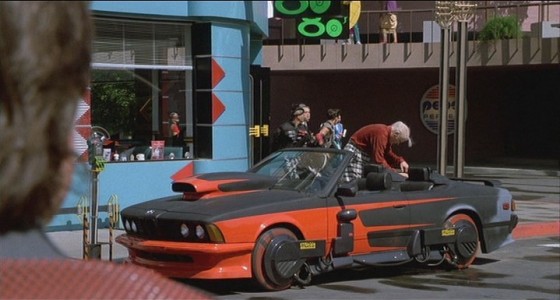 With the anniversary of Marty McFly’s trip forward to 2015 coming on October 21st, some collectors who’ve lovingly restored Griff Tannen’s BMW from Back to the Future II are looking to cash in. It’s perhaps the most famous car from the film outside of the DeLorean time machine.

The car was originally a 1976 BMW 6-Series which, in 1985, was a cheap used Bimmer that the movie lot picked up for $400. So the story goes. It was then modified extensively, most of the changes being cosmetic. Since it never had to actually drive anywhere in the film, little was done to change its basic BMW underpinnings, which at the time didn’t work. In the film itself, the car was held on a forklift for the hover-driving scenes.

For the restoration, the current owner replaced several of the hover conversion pieces, stickers, as well as the seats and tires. It’s also been restored to working order, though the hover conversion has to be removed in order to drive it. The only thing not fixed? The taillight that Griff shattered with his baseball bat in the movie. More details are given by Aficionauto in their showcase of the car.

Minimum bid is $10,000 and the auction is ongoing at iCollector.