Guardians of the Galaxy Vol. 2: Review 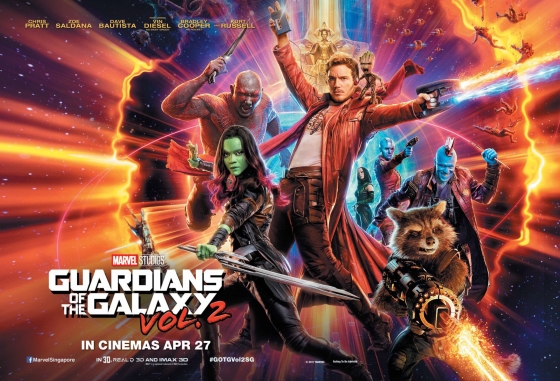 How does one write about a film sequel concerning a goofy space pirate, a hardened warrior, a hulking mass too mentally dense to know his ass from a hole in the ground, a genetically-engineered raccoon hellbent on instigating as much chaos and mayhem he can muster, and the cutest humanoid baby tree that’s also capable of throwing you to your death from a spaceship gantry? 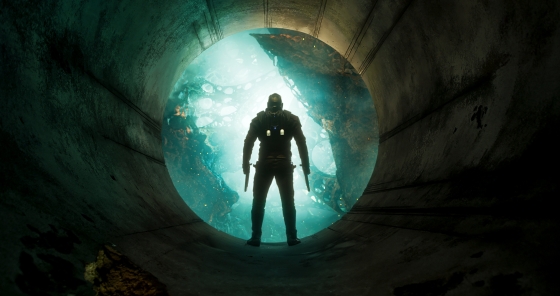 There’s a different type of vibe to Guardians of the Galaxy Vol. 2, in that it’s decidedly more self-assured and willing to grab you immediately without needless expository dialogue. Whereas the 2014 original gleefully slammed you with the requisite “tell, don’t show” storytelling establishing the alternately charming and off-putting character quirks of the titular Guardians, Vol. 2 goes the opposite direction, comfortable with a more engaging “show, don’t tell” approach. 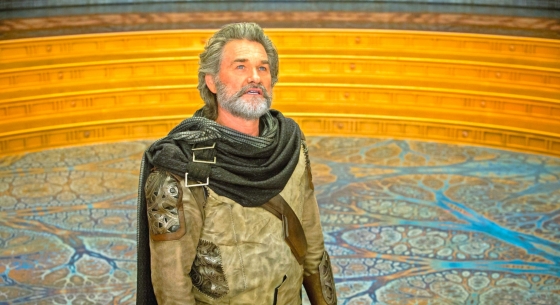 At first glance, Vol. 2 is more of the same, enjoyable madness. It’s full of laughs and enough punchy, barbed dialogue to keep things interesting, and Gunn’s direction is more than capable of juggling the many plots his script throws at us. Aside from reestablishing the titular Guardians, Gunn also has to introduce two new threats to the galaxy’s existence, and how the reintroduction of a long-lost family member throws their world into upheaval. 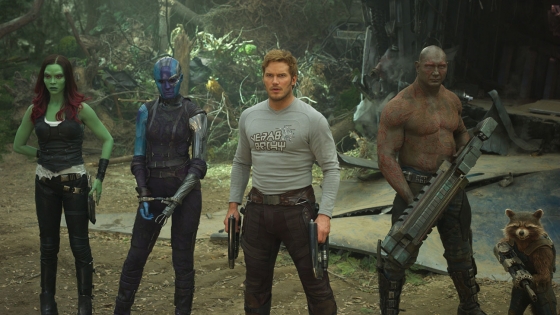 But who cares about all of that? We’re here to see our heroes on the big screen again, where their type of adventures belong. Shifty scavenger Peter Quill/Star-Lord (Chris Pratt), stoic Gamora (Zoe Saldana), musclebound dork Drax the Destroyer (Dave Bautista), fiendishly devious Rocket Raccoon (Bradley Cooper), and the now-impish Baby Groot (Vin Diesel) are all back to bring us more of their brand of mischief and comedic ruin. 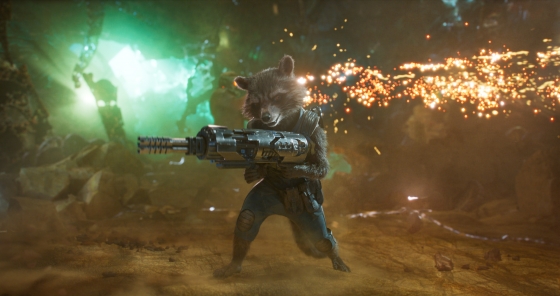 And it all starts with Rocket, being ever the impudent asshole, as he steals batteries – not an Infinity Stone, not world-ending technology, but batteries – they were hired to protect in the film’s opening by a race called the Sovereign.

Batteries. If Gunn’s sarcastic tendencies concerning the Marvel Cinematic Universe weren’t made plain before, they certainly are now. (And if you really need him to hammer it home, take note of how many post-credits scenes there are in the information box at the bottom of this review.) Seriously, batteries?! It’s a funny MacGuffin, especially considering the other sought-after objects in the MCU. But this is the color of the lenses through which Gunn sees this Universe; except for the normal hero stuff, nothing really works the way it does in the other surrounding MCU films. 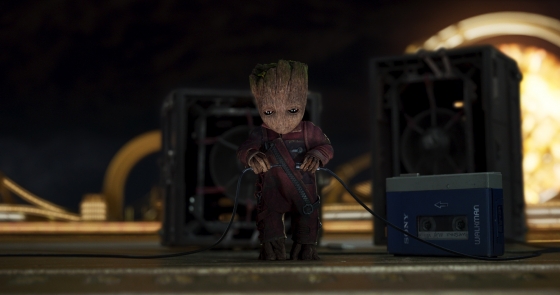 Everything and everyone in Guardians of the Galaxy and its sequel is broken, and the fun is in watching them trying to claw their way to normal. Of course, when your themes are paternal abandonment, child abuse, child trafficking, sororal jealousy, and revenge, nothing is normal. Not even a little bit. 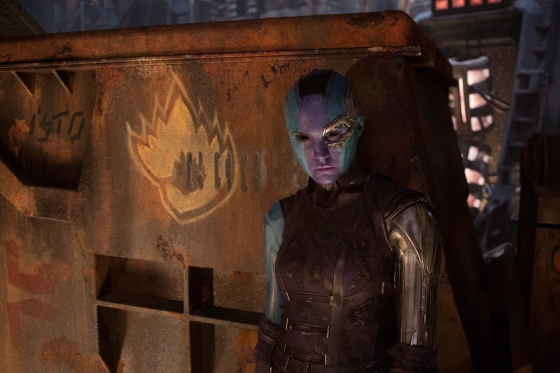 The Guardians have to fight through all of this while accepting newcomers into their fold in the form of Gamora’s vengeful sister Nebula (Karen Gillan), Mantis (Pom Klementieff), and Mantis’ benefactor, Ego (Kurt Russell), who also happens to be – yup – Peter’s biological father. All the while, disgraced Yondu Udonta (Michael Rooker) and his band of Ravagers are close behind, having been hired by the Sovereign to get back their stolen batteries.

I’m still laughing at this. Batteries. 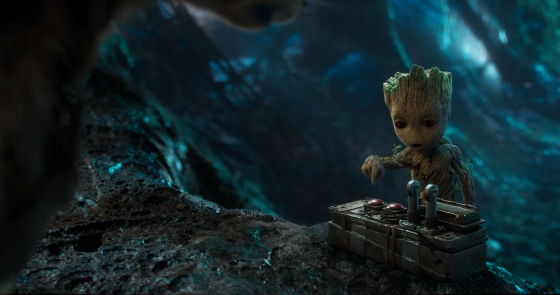 Gunn certainly has his hands full with all the many plotlines and characters he throws at us, but his deftness and the devil-may-care attitude with which he stockpiles his film has a way of washing over you with an exultant mirth. There’s always a laugh around every corner, and Baby Groot is always up to something you won’t want to miss. Performances and effects are strong across the board, making Guardians of the Galaxy Vol. 2 just as good a movie as the first. 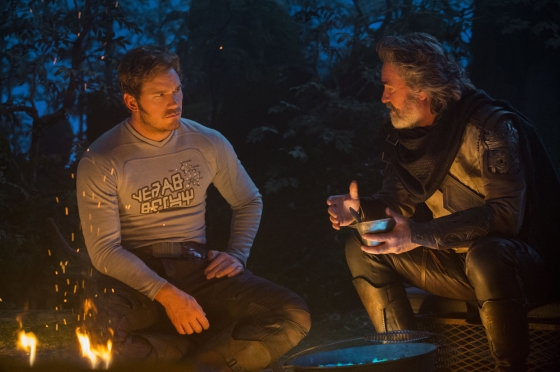 It’s not without fault, however. Aside from a halfhearted attempt at a romantic sparks between Peter and Gamora, and a certain character’s death lacking more emotional resonance, most of the film’s punches land solidly. These two areas are the only false notes of the entire film, which makes them all the more noticeable as Gunn tries to make them central to Peter’s growth as a being of the universe. Maybe it’s the unexpected cheesiness with which these two instances are treated, but they feel underwritten and are dismissed just as quickly. 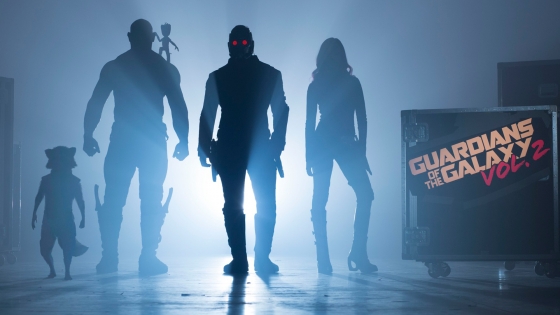 But like I said – we’re here to see the special camaraderie between the Guardians as they battle their way through Sovereign stunt fighters (the piloting of which reveals a belly laugh-worthy satire), rogue Ravagers, and pissed-off sisters with an axe to grind. Guardians of the Galaxy Vol. 2 is a terrific sequel and a great time at the movies, especially in IMAX 3D, as the screen expands during key sequences from a 2.35:1 aspect ratio to 1.91:1 for a more immersive experience. The 3D can be engaging at times and it’s wonderful during a funeral scene in the film, but it’s not entirely necessary. Be sure to stay for all five (yup, FIVE!) mid/post-credits scenes, and it’s a hell of a thing that “I AM GROOT” wears so many hats during the credits…

Guardians of the Galaxy Vol. 2

Just as good a movie as the first, being full of exultant mirth and slap-happy pandemonium.