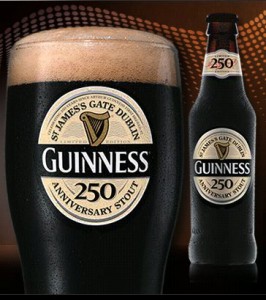 History: “This is the year to celebrate! That’s why our Master Brewer has created the limited edition Guinness® 250 Anniversary Stout. We used a proprietary brewhouse process that combines the use of stout and ale malt for a distinctive carbonated stout with a clean, smooth finish. This is the first new Guinness® stout we’ve introduced to the US since we first started importing Guinness® Draught in 1967, but it’s only available for a limited time. So starting on April 24th, get out with some friends and try a pint of our brand new brew!”

Luckily I have a pint glass, because this anniversary brew truly deserves it. Swirling it around and opening up the aroma gives way to a pretty obvious realization: it smells like Guinness. The head is rich, creamy, and exceedingly similar to Guinness’ other stouts, which stands to reason as the recipe hasn’t changed in, well, 250 years. Though this particular batch is supposedly different and limited, I can’t help but grin at the attempt to coat a classic in a thin veil of smoke and mirrors: Guinness is Guinness.

The taste is an absolute treat. Okay, so the taste is a little bit cleaner, a little bit more bitter, and a fair bit maltier than the standard fare they offer, but even with that, it still acts like a Guinness combined with a slight bit more carbonation. After another sip it occurs to me that this special stout seems to be a bit ‘liter’ as well. By ‘liter’ I mean significantly less heavy than the typical draught style, and I happen to think that this fact makes it that much more exciting. It’s nutty, a bit oaky, and absolutely vibrant with that chocolaty finish you’ve come to love from this classic brewery. It’s a bit akin to an old friend standing at your doorstep after twenty years with a different haircut and a beer gut: the same, but different. I like it a lot. Try some quick, it’s hard to say how long this might hang around! Bottoms up.

Editor’s note: After the better part of 13 months, this beer can still be found! I suggest that on this St. Patrick’s Day… or any other for that matter, you seek and drink! *Clink!*