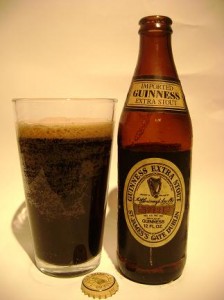 Info: “This is it, the one that started it all. Crafted to perfection for over 200 years, GUINNESS® EXTRA STOUT is descended from the definitive West India Porter known as Extra Superior Porter. Crack it open, and the first sip tastes as fresh as ever. The unmistakable deep-dark color, the crisp hint of roasted barley, the fresh breeze of hops, and the refreshing bite all make for the bittersweet reward.”

Hey, look at that! Another DARK beer! What are the odds? Well, I figured after a few of the lighter fare of late, I’d go back a bit to my dark ‘roots’ (get the hair joke there? yeah… kinda lame). Therefor, as it was yet to enter my collection’s lexicon, I snatched it up for a meager $7.99 a six. Not too shabby considering I live in the ONLY state with a dime refund (that’s sixty additional cents, my friends) added to the fee. Oh well.

Most often, a Guinness offers up its classic head that performs its mystic crawling ability right before your very eyes, and then, like the magician it is, sidles off into the wings. This Extra Stout, however, has a nice rich and creamy head that looks not unlike a dessert topping… hmm, maybe I ought to try… no, not a good idea. Anyway, the aroma is purely Guinness: sweet, caramel-y, and rich with hops. It’s such a nice smell that stands so very far apart from its stout brethren that don’t have a recipe in the Emerald Isle. The scent is unmistakable.

Once opened up nicely inside the mouth, the sweetness is so very apparent and reminds me of a chocolate caramel candy (almost Cracker Jack-like, even)… and then just like that, it changes completely into its hoppy disguise with that cloak of tasty bitterness. It’s quite reminiscent of roasted barley as it crashes lovingly into the cloying staying power of the bitter hops. It’s a Guinness masterpiece all the way. Yes, it remains bitter for  good long while. In fact, I haven’t had a sip in about two minutes and it still tastes like I just had the last one. But I do like it. If you love Guinness, I’d say this is the way to go for their best, and first, achievement.

Rating: * * * 1/2
Low, you say? Maybe. Though it is a Guinness, and it is a classic, and, yes, it is a stout… it’s just a little too bitter. Maybe another from the Guinness family is in order to raise the grade.