By Karl Smallwood on September 4th, 2013

Those tweets up there were sent by one, Hasan Syed, a name you’re just about to never stop associating with having balls the size of sedans. You see Mr Syed up there paid to have those tweets telling British Airways how much they suck promoted on British Airways’ Twitter feed.

Having to pay per letter is the only time we’ll accept leet speak.

Yes, Hasan paid cash money, a thousand dollars of it by his own account, to expose the horrible customer service of a huge, multi-national company, right to the feeds of their own customers.

Almost instantly major news networks around the globe picked up on this story before British Airways even bothered the send Hasan a courtesy tweet saying, “Hey, Hasan, sorry we lost your dad’s luggage, we’re sorry.” Oh no wait, they didn’t do that at all, they acted like total helmets: 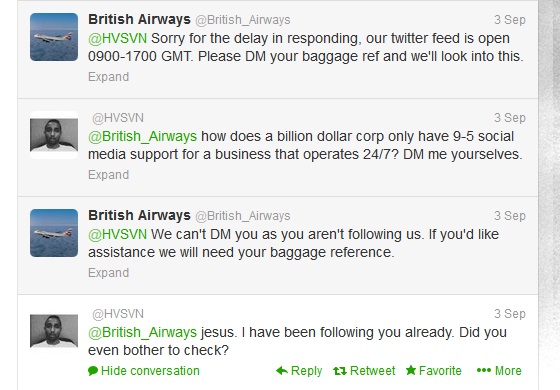 You see that last part, that’s where BA tried to convince the guy who’d spent a thousand dollars proving he knows how to be a boss on Twitter that he was using Twitter wrong. That right there is how stupid big businesses think their customers are.

As it stands, Hasan is still dishing out barbs right now. But we wanted to bring up a much more awesome point. Hasan might actually start a trend here, he’s just one pissed off guy who wants his dad’s luggage back. But imagine if other people got in on this. People now realize that they have the ability to make any company’s Twitter followers see a message saying, well, whatever the hell they want. Think about the possibilities here.

Someone could make a fake profile with Obama’s face on it and promote a Tweet on his feed saying “Party at the white house later, BYOB”. That’s not us being facetious, that’s literally something someone with enough money could do. And come on, be honest, the world is a better place now that you know that.