A Guy’s Guide To A Break Up 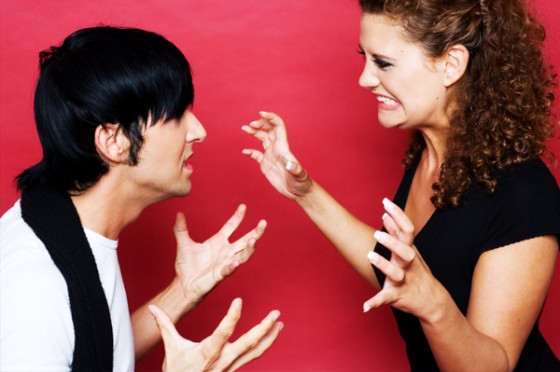 There are many ways to end a relationship: moving to Spain, throwing yourself off a cliff, faking your own death, changing your name to Sandy Lollygagger. Or you can take one of these easier ways out by just talking (or not talking) to the person you want to ditch. Most of them suck, but they get the job done. Much like a $20 hooker.

I need space (to fu*k other men): A more honest and time-saving method this would be.

“I no longer enjoy your company. That piece of facial hair you have that you think makes you look like Tyler Durden gives me a rash on my chin and vagina. I have Facebook, and I accept everyone who adds me, even that Turkish bloke so I do not need your dick anymore. I’m not mentally stable enough to cut ties with you completely though. By “space” I mean maintain a distance that lets me increase my chances of getting pregnant by 40% and getting syphilis by 78%, while still being okay with you so that you answer my crying phone calls.”

That, in the form of a letter with a wax seal (Stark, obviously), handed to you by a limo driver after a sharp knock on the door. What better way to be ditched?  I predict a sharp rise in mum’s finding sons face down in Corn Flakes with slashed wrists. Swings and roundabouts really.

Cliché: On accident or on purpose. It’s WAY funnier in hindsight, but when you’re up and dropping the famous, “It’s not you it’s me” or “I’m really busy with work and stuff” it’s terrible and you just want the ground to swallow you up.

At that point pulling a Glock and blowing the blubbering person’s face off would be kinder, just so you can get the fuck out of there.

The only thing worse than hearing those things, which I yield are shitty, is saying them. If you’ve never had the chance to spurt these age-old pearls of pain and anguish, then you’ve probably heard them, and subsequently ran up the stairs and cried in front of a mirror listening to Adele for two hours. However, saying them is much worse.

You hear yourself saying these words, as the inner part of your brain starts nudging, Hey Bro, we’re in this together and all, but reciting an episode of Friends to her isn’t going to make her feel better about being ditched. So as you stand there all weird and uncomfortable, stumbling over your words like a less charming Hugh Grant, bringing up sex references to show a little bit of humor, noticing they’re still crying, so that idea is halted. That Glock idea now seems a little more than a contingency plan.

Sabotage: (Saaaabotaaage) Is the act of keeping the relationship going with minimal effort, using less money and less face time to palm the person off until they get the message and end the relationship themselves. For this move, you need to invent a character for yourself who can slowly destroy the relationship from the inside. (You also need to be a sociopath.)

When all is said and done, you’ve bunked off a few meals, stopped calling the other side so much or straight up fingered her friend. Your pseudo saboteur character can high-five himself and celebrate in a shady pub with a glass of whiskey.
It’s one of the smarter ways to end a relationship, because you’re not a total asshole; you’ve subtly made her think this relationship that was going so well (flowers were brought and restaurant tables were booked all as a pretence to shooting your load into her vag) has turned to shit. If you play it correctly she’ll blame herself and break up with you. Get ready to join your saboteur at the bar!

Ignoring: Failing to acknowledge their existence at all. Letting the long crying-wordy texts sit in the inbox, eventually becoming essays with the noticeable lack of kisses. It’s a kind thing to do. You went on a date, she made a shit joke, moaned, talked about her ex, told you a shit story that you just cannot believe, even with a drunk brain.

“You know in Captain America, the guy actually lost all that weight to play the part at the start of the movie you know, when he’s all thin.”

You heard that and said the only thing a decent person could say to keep the conversation going:

As you open your mouth slightly wider than normal to give the impression that the story was even vaguely interesting… but really, you wanted to throw your beer at the wall, scream, then toss a handful of peanuts at her stupid face… you made up your mind never to call her again after you started peeling the label your off your fourth Budweiser.

Manly Approach: The most respectable way of removing the tumour-like attachment — straight up losing your shit. You flip, you snap, beds are shat. This usually happens after something bad has gone down, the straw that broke the camel’s back so to speak. As the lady is pleading to you that she was spiked, she was too drunk, my friends left me, I had nowhere else to stay! I slipped and fell over onto his cock, over and over again, I couldn’t get my balance, and oh, it was a nightmare! Take the bull by the horns, dude. Here’s a lesson from Stu.

Phone Call:  Be a pussy. I’ve done it. Short sweet, say what you want, you don’t have to see her cry, what’s better than that? Not much, but it can go badly. This is straight up truth here as well, so enjoy laughing at my life.

I had just turned 17 and was with my first ever girlfriend for 11 months. She was a year younger than me, and I had ransacked her vagina for about nine months… At 17, a year-long relationship is a fucking trip. For the first five months it’s fantastic, discovering sex and trying out your latest porn star moves. But even then I was pretty much Chandler Bing in terms of awkwardness regarding longevity. So I decided to end the relationship after working out with “It’s My Life” by Bon Jovi playing over and over again until I was punching the air in silent approval of my decision.

So I called my girlfriend, and dropped the “We need to talk” bomb and right away I could sense her mood slump. She drew breath to speak. I silenced her with words (I didn’t cut her throat or anything. Here’s where it gets tragic.

Me: Look, you’re really great and everything, but I don’t think I wanna be with you, right now, at the moment”

Me: Well, I just… feel different, I want to concentrate on my work…

Girl: *Now crying and shouting* “But you love me!?”

Me: What is love exactly, I mean, I think you’re fine and everthin-

Girl:*Screaming through snot and tears* “Say you love me, TELL ME YOU LOVE ME!” (clearly harbouring no daddy issues at all)

Girl’s mom: *Shouting* you’re not welcome in this house (inaccurate because they lived in a flat) again, you make my daughter cry every week you horr-

Girl: *Shouting through an aching throat from all the dry-heave-tears, *coughing phlegm* Mom! Get out! Matt, tell me you love me!

Me: Goodbye, It was nice while it lasted *click*

(Shit you not, I said that, I’ll take my Oscar now and never get laid ever again.)