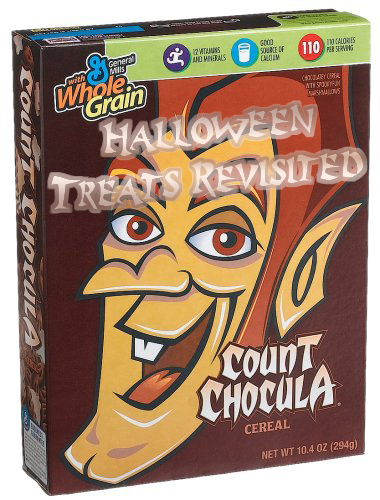 I love Halloween. Sure, I might be getting a bit long in the tooth to still be dressing up and begging door-to-door for little candies, but there’s no law that says I can’t live vicariously through my children. And I do, too. I have three kids and it never fails that each and every Halloween they all pretty much stick to their own basic costume rules. Charlie, my 9-year old digs creepy stuff, ergo: zombie. My 7-year old, Simon, is obsessed with Robin (that’s right, not Batman… ROBIN) thus, this year, he has chosen Nightwing. The slightly cooler version of Robin. And Addison, my 4 1/2-year old girl digs princesses and ballerinas, as girls are wont to do, and so she is going to be an amalgam of both. So there ya go. Awesome.

Ah but it’s not really the costumes that interest me as much any more. No, sadly my attention has turned of late to the treats rather than the tricks. There’s just something so cool about the products arriving around this time every October to promote what once was far more of a taboo celebration. See, companies have gotten quite a bit smarter over the past ten years or so and are trying hard to carve out their own little corner of the ‘holiday’ market by giving their foodstuffs a slight makeover for trick or treating. Sure, a lot of this stuff is candy and smaller, personal goodies… ‘fun sized’ if you will, but a few things are just regular items with Halloween touches. Presumably all of these things can be found all over the place, but I suppose its possible that our local Meijer and WalMart acquired site-specific items. Either way, check out a bunch of the coolest Halloween treats available now. Oh, and sorry about the blur on one or two of these. I had to use the camera on my phone since I’m not too sure how store managers feel about some cat snapping pics of their products. I had to be stealthy. 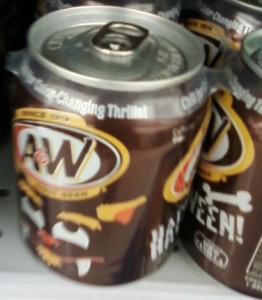 The 7-Up company issued a few mini-cans this year with Halloween motifs. They have Sunkist and A&W at our store, but I only got a pic of this one since it had a kick-ass monster on it. I think the Sunkist one just had a pumpkin. 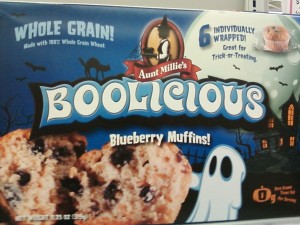 So Aunt Millie’s released a series of four super cool Halloween-themed snack cakes. The box designs are simply gorgeous all featuring a great background, dark and foreboding colors, and even a change to the company logo giving the iconic Aunt Millie herself a witch hat and a little spider web. These guys went all out. This one is, obviously, Boolicious Blueberry Muffins… 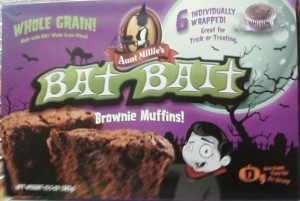 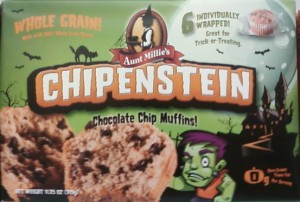 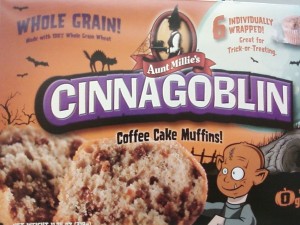 And finally the Cinnagoblin Coffee Cake Muffins mascot, the bizarre goblin and his cave! So Awesome.

But let us not forget the grand-daddy of all pre-packaged snack cakes this Halloween: Hostess! They always manage to come up with a delicious snack or two for the season, and this year is certainly no exception. 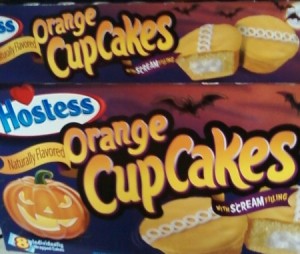 Man I hope ‘Scream Filling’ is just a marketing ploy because the last thing I want to happen when I bite into a cake is for it to yell.

Now this year, more so than previous I noticed, Hershey has really gotten into the game with not only a variety of Halloween-style candy items, but also very nice displays featuring a group of kids (monster kids, that is) promoting each specific product. 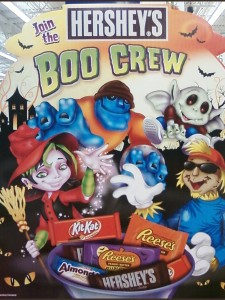 Here’s a picture of one of the displays featuring ‘Hershey’s Boo Crew’, which looks strikingly similar to old 80’s style cartoons. Man, they even tossed in the nostalgia a bit there, too! They didn’t have specific names that I saw, but each character represents one of the Hershey-brand candies: The witch is Kit Kat, The Frankenstein is Almond Joy, The bat/vampire is chocolate bars, and the scarecrow (?) is Reese’s peanut butter cups. 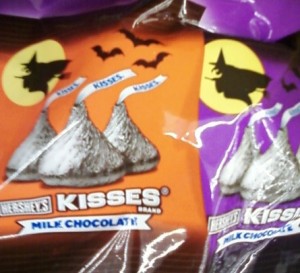 Speaking of Hershey, their Kisses bags were adorned pretty nicely with witches and bats… 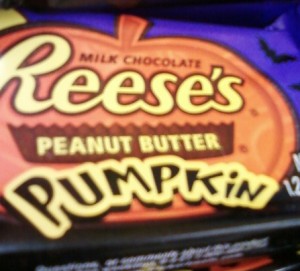 Everyone is familiar with the Monster Themed Cereals, but, sadly, our local stores only carry Frankenberry and Count Chocula in limited numbers throughout the year, and never Boo Berry unless it’s, well, Halloween. So, I was more than pleasantly surprised to see not only all three of the boxed breakfast goodies up for sale, but also two new monster treats… 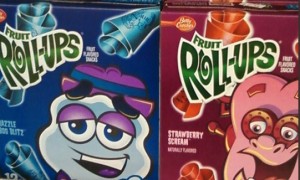 That’s right! Booberry and Frankenberry Fruit Roll-Ups! As you can see, they’ve used their older visages to grace the boxes rather than the newer redesigns you’ll see in a second. Also, Booberry’s are called ‘Razzle Boo Blitz’ and Frankenberry’s are ‘Strawberry Scream’. And then they say ‘Naturally Flavored’? There’s no such thing as a Snozzberry! Anyway, I bought these for my kids since, well, my 36-year old tummy argues with me a lot. 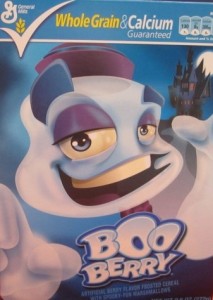 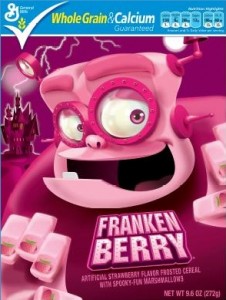 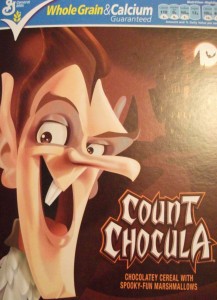 Yeah, I’m not too sure how I feel about these, I don’t know, ‘modern’ redesigns. They just look kinda cheesy to me. Anyway, speaking of cereal… 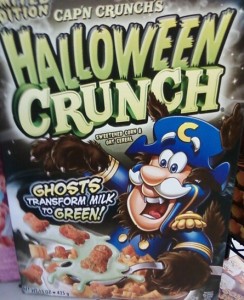 Yeah, now this I can love. When Quaker does a holiday Cap’n, they do not screw around. Obviously he’s either in the process of turning or has just turned into a werewolf, hence the dark fur… which makes sense considering he has… white hair. Anyway, the claws and especially the fangs are a really nice touch and of course, the piece de resistance: the ears coming out of his hat. Classic all the way.

Next, it seems that Oreo has really gone all out this year. They’ve dyed their traditional white filling orange -which in and of itself is a great first step- and they’ve even gone so far as to offer five different cookie designs for the wafers! Now that’s commitment! 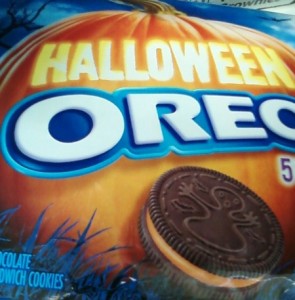 And finally, just to round out the Halloween season, several other companies not in the ‘sweets’ making business have tossed their hats into the ring as well. 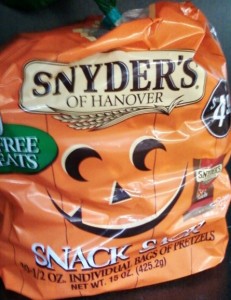 Ah, Snyders. Trying to corner that ever-so-small section of the market geared toward that health-conscious family who’d just as soon hand out toothbrushes and McDonald’s gift certificates than candy and can now at least temporarily avoid egging and mail box baseball with these snack-sized pretzels. Tasty, too. 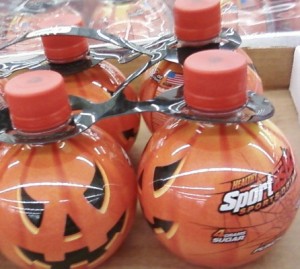 I’m not too sure how ‘healthy’ a Sports Drink can be with 4 Grams of sugar, but I guess it beats most candy pretty pretty well. Also, Jack o’ Lantern bottles? Hell and yes.