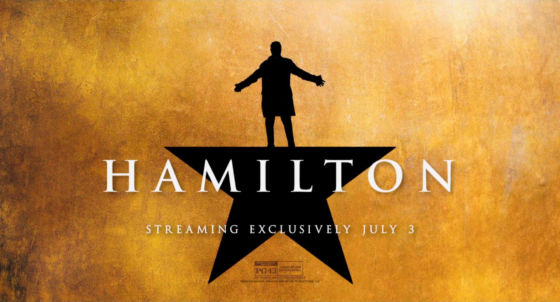 “The story of America then, told by America now.”

In 2015, a musical called Hamilton premiered off-Broadway at the Public Theater in New York City. (Richard Drysdale from Knives Out saw it there before it blew up, a little factoid he likes to drop in police interviews.) Six months after its January debut, the play moved to the Richard Rodgers Theatre on Broadway and opened on July 13th. Just before members of the original company started moving onto other things, a decision was made to film the play as it was, incorporating two performances with an audience and blocking off times for additional private filming between June 26th and 28th, 2016. Creator/star Lin-Manuel Miranda referred to this official and professionally-shot version numerous times in interviews, saying he wanted to release it after enough people have had time to see the play performed live. 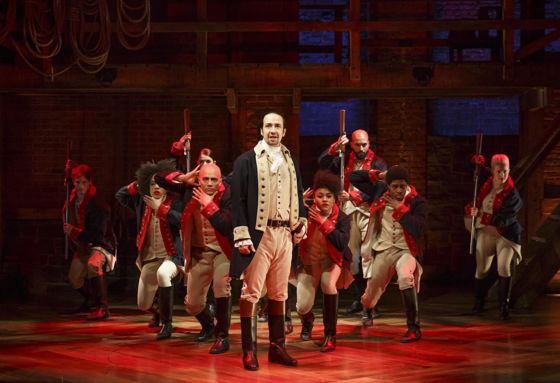 Now, almost exactly five years to the day after its Broadway premiere, this sparkling, energetic, every-bit-worth-the-wait film has been given to the public on the Disney+ platform. Originally slated for an October 2020 bow in movie theaters, they were forced to scrap this plan due to the coronavirus pandemic; Miranda only announced its transition to Disney+ less than a month before its July 3rd release. Featuring all of the original cast, this is only the second official document containing their performances – the first being the soundtrack which many of us have spent hours upon hours grooving to, being moved by, memorizing, and studying its powerful lyrics and messages laid over hip-hop instrumentation. 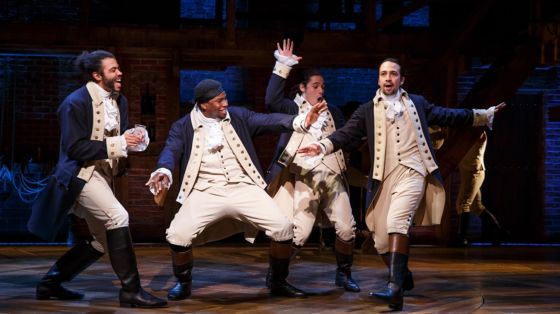 Forget what you know about musical theater, as Hamilton breaks all the rules. Miranda, director Thomas Kail, choreographer Andy Blankenbuehler, lighting designer Howell Binkley, costume designer Paul Tazewell, and the rest of the cast and crew aren’t just trying to go from A to B to C. They drill down to the cores of each of these plot points, using every musical method at their disposal to do so. Whether the songs are fast-cyphered rap tunes (“My Shot”) or straight-up Broadway (“What’d I Miss?”), or the dance steps appear modern or traditional, there’s an unbound life injected into everything, an authentic gut feeling which hits you harder than a thousand Fantines and Valjeans. 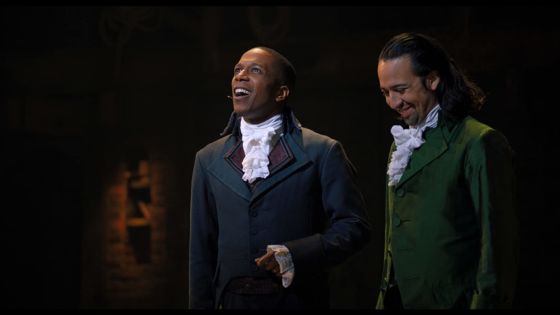 A lot of it has to do with Miranda’s witty use of double meanings, which in turn appeals to the higher brain in all of us. From the opening number, the groupings of those who say they fought, died for, and loved him almost serve as a heads-up; we’re in for something good. (Take note of who claims each action… some of them play dual roles and what they say plays into each part.) There’s a lot going on in Hamilton and it pulls your attention in so many directions, you can’t help but feel overwhelmed. (Admittedly, the first time I heard the soundtrack, I didn’t get the draw; after studying the lyrics and seeing it performed twice, I realize I still don’t know every ingredient Miranda stuck in there.) Rap references and lifts from other musicals abound, and there aren’t any nods to current events to pigeonhole it as written in any given era. Hamilton’s timeless lyrics and vibe lend themselves just as much to today as much as they did the day it premiered at the Public, rooted in a mix of historical fact and apocryphal tales which alternately entertain and give us the inspiration to dig deeper. 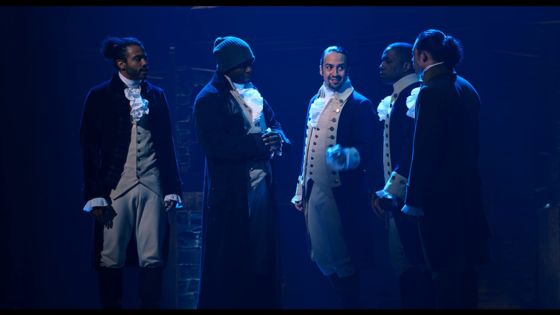 So how does Miranda’s cultural phenomenon translate to film? By mixing a balance of wide shots showing Blankenbuehler’s intricate choreography and intimate, stage-based close-ups which bear the heavy weight and drive which power this play, Hamilton remains a jewel, accentuated by views you won’t get from your opera house theater seat. This is the John Wick of filmed theater productions, with Kail’s direction and cinematographer Declan Quinn allowing us to experience long, detailed looks at everything from the set design to the visceral punch of each dance step, thankfully edited to allow each individual actor or set piece to shine. 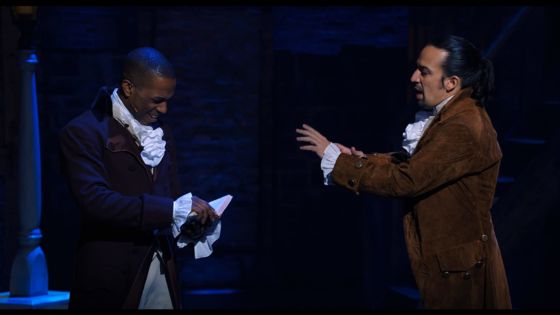 Dress-rehearsals, these ain’t; every actor featured here was born to play these roles, from the white vest-clad chorus members to the main cast. Fewer original Broadway ensembles have been so perfect in their roles and with each other, and part of the energy comes from the camaraderie and ease so obviously shared between all of them. Not that they’re breaking character or goofing off, mind you; there’s a knowing trust coming through each character’s eyes, a bond shown through body language and comfortableness among friends. It affords an electricity and unity absent in other shows which just feature a bunch of people singing to the audience and waiting for their next cue. To be able to see this original cast bring this kind of heat is a gift. 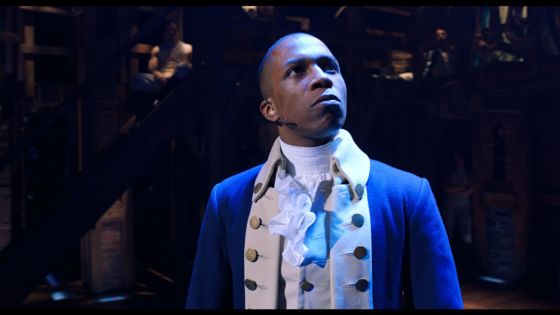 Viewers everywhere will finally match faces and visual emotions with the voices they might have only heard on CDs and mp3s, and this is one hell of a thing if this is your first time seeing it. Owing to actual performance (read: not just standing still in front of a mic in a studio), those lines to which we know all the words and cadences are given more oomph, swing, humor, and drama. Leslie Odom Jr.’s passionate and appropriately snotty performance as Aaron Burr truly marks him as the Salieri to Alexander Hamilton’s Mozart. Played by Lin-Manuel Miranda, we see him build the fire in Hamilton’s eyes and body as he makes his way to America in the opening prologue (“Alexander Hamilton”), and he maintains that fire at its peak throughout, alternately stoked and dampened by Burr’s inability to stand for an ideal. Burr is written as a man who tells on himself by saying, “I am not standing still, I am lying in wait”; the wait is for someone else to take the reins while he rides coattails to glory. 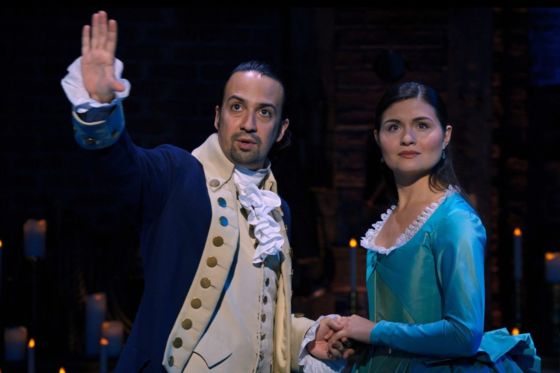 Friends first, military comrades second, lawyers (often working the same trial) third, political enemies fourth, locked in a duel to the death at the last – all because Hamilton blazed a path rather than have it be cleaved for him. Everyone around them is often made a fallout victim from their explosive acquaintance, especially Hamilton’s wife Eliza (Phillipa Soo) and their child Philip (Anthony Ramos in a dual role). Many viewers will see for the first time how the fast-paced action of the first gives way to more introspection and a reckoning of their earlier life events. Soo cuts deep as Eliza, who in many ways serves as Hamilton’s stabilizer throughout the tumultuous storms of his life, all the while carving herself out as strong and human, countering the boisterous tête-à-tête going on in other scenes. She is truly Hamilton’s home, capable of getting him to shed his daily façade of bluster and bravado. 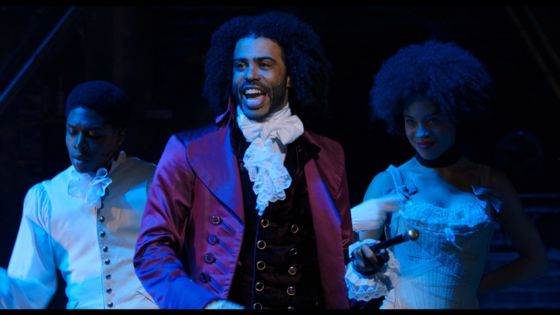 Also seared into our memories are Renée Elise Goldsberry and Daveed Diggs in career-defining roles as Angelica Schuyler and Marquis de Lafayette/Thomas Jefferson, respectively. Goldsberry is pure Broadway dynamite as Angelica, Eliza’s sister who is emotionally and intellectually involved with Hamilton; her note-perfect rapid-fire delivery of “Satisfied” is a highlight of both the show and this film, being a paean to this unrequited love. On the flipside, Diggs possesses an MC’s swagger and tone both as Lafayette and Jefferson, and his ability to spit breakneck-paced game with humor and intelligence is revealed to be legendary. Both of them bear a massive ability to wow, and this performance finds them putting everything they’ve got into making you truly believe in their characters. 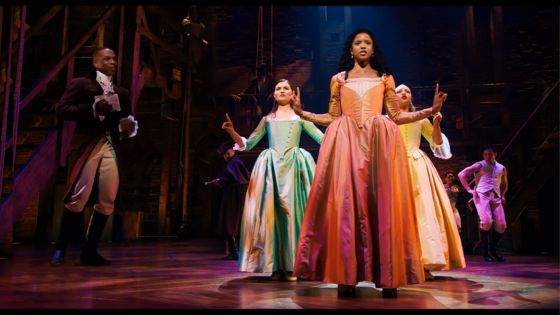 Honestly, this film could’ve consisted of a single camera pointed at the stage and released that way – that’s how strong this cast, the showmanship, and the script are. But this filmed version of Hamilton narrows our focus, allowing us to absorb Miranda’s intentions beyond the wide expanse of the stage. For instance, the very last, pre-lights-out action as filmed gives further rise to a theory described a while ago in various threads all over the web which will surely be discussed. (I’m not going to get into the details here; watch it, then look it up yourself.) Hamilton is full of these engaging moments; anything from a simple character motion, a lyric of a song, what Hamilton means when he says, “Laurens, I like you a lot,” and other bits will also no doubt spark a search for the play’s subtext and motivations. Miranda’s nods to hip-hop pioneers and musical theater alike keep our ears sharp and our wits quick, drawn to rhythmic, layered patter and lickety-split delivery bolstered by bravura singing and hypnotic choreography. 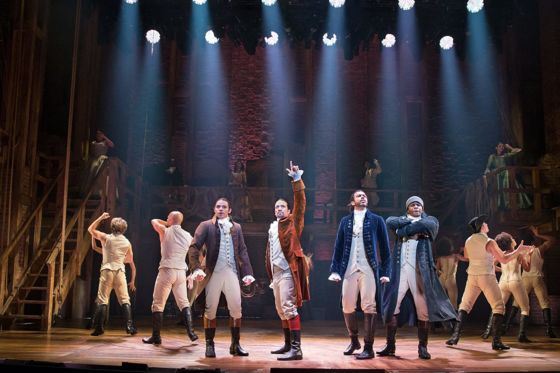 The world at large has received one of its best presents for America’s birthday – the opportunity to see Hamilton in its finest form. During our current health and political troubles, it’s quite a thing to see an alternate take on the founding of America and how we struggled to get what we needed, either during the Revolutionary War or in our first steps as a country. The play shows a different side to the cost – the blood, the sacrifice, the compromises – all packed into one of the most fulfilling theatrical experiences ever. The cast and crew of Hamilton have put their hearts and souls into this film which, both in performance and execution, hasn’t aged at all since its recording four years ago.

The world at large has received one of its best presents for America’s birthday – the opportunity to see Hamilton in its finest form.