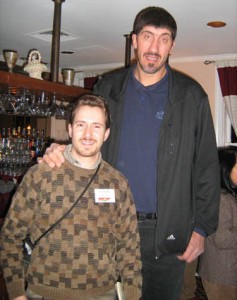 I was all pumped up because I was supposed to meet my childhood hero, Manute Bol, at Zed’s Ethiopian Cuisine in Georgetown, Washington D.C. Unfortunately, Manute couldn’t make it, but I was equally thrilled to meet someone just as tall who I liked just as much, 7’7″ former Bullet/Wizard/Net, Gheorghe Muresan.

I’m always interested in what athletes do when they retire. While some, like Charles Barkley, get DUIs, I’m happy to report that Gheorghe, who is from Romania, is living in Maryland, enjoying fatherhood, works with the Wizards, and runs a basketball program for kids called the Giant Basketball Academy.

I palled around with Gheorghe for several minutes, asked him Gunaxin’s six questions, and impressed him when I mentioned that I knew that he had led the NBA in field goal percentage in 1996-97. I was such a fan of his, I remember anxiously watching My Giant, with Billy Crystal, when it came out in 1998.

As for Manute, I’ll meet him another time. I know for certain that he’s up to some cool stuff that I’m looking forward to reporting.

Before we go, let’s look back on some classic Gheorghe moments: