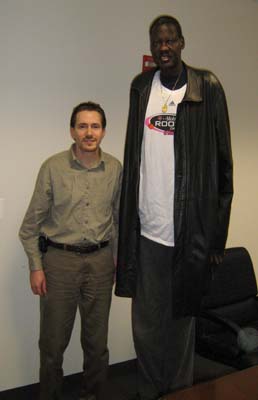 I finally got to meet one of my favorite basketball players ever, one of the the best shot blockers in NBA history, Manute Bol. Now 46 years old but still towering over us at 7’7″, Bol has spent the years since his retirement from the league doing Bono-like deeds without the Bono-like headlines.

A Sudan native, Bol has given his fortune to help the people of his war-torn country, founded the Ring True Foundation and helps to raise money to build schools through Sudan Sunrise. He had a stint as a horse jockey, suited up for an ice hockey team, and even boxed William “The Refrigerator” Perry, all in the name of earning money for noble causes. I’d like to see Bono do that.

In October he stepped into the role as a spokesman for Ethiopian Airlines Journeys, where he promotes tourism to Ethiopia and East Africa, and is planning on hosting an NBA Legends trip there in the fall. “When you go there, you will want to go back again and again,” Bol said. And I’ll vouch for him, because I have been to Ethiopia and it was easily the most exciting trip I’ve ever been on in my life.

Bol played for the Washington Bullets, Philadelphia 76ers, Golden State Warriors and Miami Heat during a ten year career. He told me that one of his best memories was when he was playing for the Bullets and had a triple-double. He now lives in Kansas City.

As with Gheorghe Muresan, my interview with Bol ended on a high note when I asked him Gunaxin’s Six Questions.

And now, let’s watch why Manute is so great.